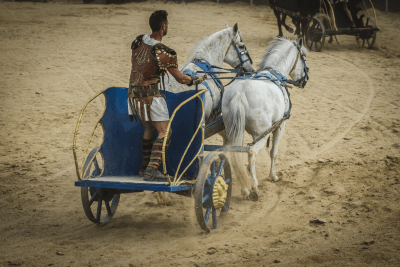 The team of horses was called auriga; the best horse was the funalis, always the horse on the extreme left. As befits Roman society, the best teams were those in which the common auriga was employed to best effect with their better, the funalis. The chariots were built purely for speed, very far removed from war chariots, and were drawn by teams of two, four or sometimes more horses. A two-horse team was called a biga, a three-horse a triga and a four-horse team was a quadriga. The larger teams, as many as six to ten horses, were very rarely used and mostly as a showcase of drivers skill rather than speed.

The public adored the top drivers. They were quite literally comparable to modern day sports stars. And, quite naturally, there was a huge amount of betting surrounding the races. Most drivers were slaves, but there were also some professionals among them. A good driver could win enough to make less wealthy equestrians jealous.

With the racing circuit being sand, there could be no lanes... and little which could be describe as rules. The Romans did use a staggered gate system, the carceres, to ensure the outside teams didn't suffer from unequal racing distance. The first driver to complete the seven rounds was the winner- that was it. Between start and finish pretty much anything was allowed. Crashes were frequent and could be quite spectacular. There were usually 10-12 heats on a race day, with as many as 24 on major events.

The race was normally seven laps around the stadium floor. The racing circuit was open with a median strip called the spina dividing it. The ends of the spina were anchored by poles or obelisks called the meta. This made for incredibly tight turns at either end of the spina. The skilled charioteer would corner as tightly to the meta as possible; sometimes grazing or even crashing into it. Of course outside drivers could try to force an inside collision to get ahead, but flat out ramming another chariot to slow or stop it was considered bad form and the crowd disapproved. And disapproval of a driver could drastically lower his chances for future racing.

The average charioteer had a relatively short career before injury or death ended it. The roman style of racing had driver standing upright and slightly forward in the chariot, wearing a belted tunic in the colors of his team (more on that below) and a light helmet. The driver looped the reins over his arm, unlike the greek style where the reins were just held. That meant if anything happened, the roman driver could be dragged by his team. Hence a knife was worn in the belt to cut the reins if necessary.

All of this, though, did not mean that a skilled charioteer had as dangerous a job as the average gladiator. Some of the popular drivers achieved over a thousand victories and some auriga were reported to have won several hundred races.

The drivers were the sports superstars of their day. They could win greater name recognition across the Empire than even gladiators. One celebrity driver was known as Scorpus. He supposedly won over 2000 races before being killed in a collision at the meta at about 27 years old. Gaius Appuleius Diocles had perhaps the most recognition of all. He was a quadriga charioteer who drove in over 4200 races. His record included 1437 second place finishes and 1462 wins.

Roman passions ran high when it came to supporting one of the racing teams and its colors. There were six different factions to support over time, including the red (russata), the green (prasina), the white (albata) and the blue (veneta).

The six racing teams and the time of their establishment:


Emperor Caligula was a fanatical supporter of the green party. He spent hours in their stables, amongst the horses and charioteers. It was recorded that he even ate there. Emperor Nero raced chariots himself, and drove in the Olympic Games. After major race days, it was not unusual for assaults, murder and vandalism to occur. Very much like the aftermath of a modern closely contested World Cup Competition. While there were six factions, eventually it really came down to two major ones: the prasina and the veneta.

The fanaticism of their supporters, often based on class, rank and economic factors, almost lead to the overthrow of Justinian in January 532 C.E. Supporters of jailed team members of both the Blues and the Greens virtually laid siege to the Imperial Palace in Constantinople. The people were already angry with Justinian over large increases in taxes and there was a war with Persia ongoing. The dismissed prefect John- the Cappadocian, and quaestor Tribonian, were joined by disaffected senators who saw the unrest as a time to appoint a new emperor. The rioting burned almost half the city down and when Belisarius and Mundus came into the city to restore order, tens of thousands ended up killed.

Did you know...
Originally chariot races were held only on religious festivals like the Consualia, but later they would also be held on non-feast days when sponsored by magistrates and other Roman dignitaries.