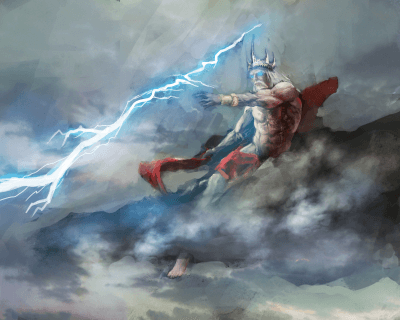 Roman mythology is the combination of the beliefs, rituals, and the observances of supernatural occurrences by the ancient Romans from early periods, until Christianity replaced the native religions of the Roman Empire.

Myths and stories played two important roles for the Romans. One was to try and explain situations and circumstances that they did not understand, such as the origins of the world, or why droughts occurred, for example. The other was to provide a sense of security and reassurance with regards to the future. Instead of worrying that something bad could happen at random, having an unshakeable belief that the gods and goddesses could be pleased through actions, and thus preventing catastrophe, provided the Romans with a sense of control over their individual and collective destiny. So long as they worshipped and made offerings in the right way and in the right amount, they believed that the deities would protect them from harm.


The Origins of Roman Myths, Gods and Legends

The religion of the early Romans was so changed by the addition of numerous and conflicting beliefs in later times, and by the assimilation of a vast amount of Greek mythology, that it cannot ever be reconstructed precisely. This was because of the extensive changes in the religion before the literary tradition began.

The origins of those myths were in most cases unknown to the early Roman writers on religion. On the other hand, classical writers - such as the poet Ovid in his Fasti (Calendar) - were strongly influenced by Hellenistic models, and in their works they frequently employed Greek beliefs to fill gaps in the Roman tradition.

So much of early Roman culture was derived from the existing and already well-established civilizations in the area. As we have seen on the Roman Navy page, where the Romans copied and then improved upon the ship building skills of the Phoenicians, Greeks and Carthaginians, the Romans readily absorbed ideas from other peoples. With so many other civilizations in the Mediterranean area, all trying to make sense of the origin and workings of the world, it is therefore no surprise that their beliefs intermingled.

With one culture influencing another, often taking an idea and altering it slightly according to their own beliefs and way of living, it is difficult and incorrect to say that the Romans derived their mythology from just one culture. However, there is no doubting that one civilization over all others had the biggest influence on Roman beliefs: the Greeks.

While it was inevitable that these two ancient superpowers would one day clash (Read More: First Macedonian War), the Romans greatly admired much of what the ancient Greeks had achieved. The powerful yet competing city-states of Athens, Sparta, Thebes, Corinth etc had been united by Philip II of Macedon in the 4th Century BC. Then, under his son, Alexander the Great, the new Greek empire had expanded and conquered huge amounts of territory, including Egypt and land right up to the border of modern-day India.

We tend to think about the Roman empire as the all-powerful and mighty force that it became, but we need to remember that, in its early days, it was very much a small player in a world with well-established and far larger civilizations. During this period, there is no doubt that the Romans would have looked at the Greek empire with mixed feelings of envy, awe, jealousy, and a source of inspiration for what could be achieved. They would have marvelled at such things as their wealth, the buildings, the artwork etc of the ancient Greeks, including the then rather radical idea of democracy that would later become a key element of the Roman Republic.

The beliefs of this powerful and large civilization also had a significant influence on the Romans. After all, if they had achieved so much and could be clever enough to build such structures and create such artistic and literary works, then surely their thoughts about the origin and general workings of the universe must be true and accepted?

Perhaps it was just the sheer number of people that lived within this expanded Greek empire, all communicating with each other and people abroad when trading. With so many people spreading thoughts and convincing those they met about these ideas, it is no wonder that Greek myths and legends quickly became embedded in the general thinking of the nearby fledgling Roman empire.

One of the saddest aspects of modern-day religion is that, despite often sharing a surprisingly similar number of common beliefs, the culture and belief in how society should function and how people should live their lives has meant that each religion has, over the centuries, shaped and moulded these original concepts to fit their own purpose.

The Romans were no different. They adapted the Greek gods to make them more suitable for their own thinking and way of life. For instance, the Romans had a stronger sense of belief in 'the collective' than the Greeks. Unlike the exploits of heroic individuals that can be found in many Greek tales and legends, the Romans believed that the actions of Roman citizens should benefit the people of Rome first and foremost, rather than individual glory being the priority. This was a concept that was highly prevalent during the Republican period, and always drummed into the heads of powerful generals to prevent them wanting too much power, although with varying degrees of success!

As such, the characteristics of gods and goddesses were altered and changed to fit in better with Roman values and way of life. Having a population which worshipped deities that went against the grain of what those in power felt was in the best interests of the state would be a recipe for trouble.

The other reason why the Romans altered Greek deities over time was to simply claim them as their own. As Rome became more and more powerful, the Roman mindset became more accustomed to believing that they were the greatest civilization on the planet, as opposed to the feelings of reverence and wonder that they felt for the Greeks before. It was far better to portray the gods as direct ancestors to the Roman people themselves. After all, if the original gods had "abandoned" the Greek people in their fight with the Romans, what would stop gods and goddesses not affiliated directly with the Romans from doing the same one day? It was far more comforting to believe in deities that you believed were present for the sole purpose of looking after you.

Covering the best part of 1,500 years, in an age where people struggled to explain the functioning of the world around them, it is no surprise that the number, names, attributes and function of the Roman gods and goddesses changed during this time.

Along with the myths, legends, official and unofficial gods and goddesses, there also existed numerous cults.

Many Roman emperors were deified and revered as gods after their deaths. In fact, this became standard practice for all emperors from Severus Alexander in 235 AD onwards.

FIND OUT MORE ABOUT THE ROMAN IMPERIAL CULT

Cults of the Imperial Legions

The religion practiced by the soldiers of an imperial legion was often quite a mixed bag. The expansion of the Roman empire during this period (from Augustus in 27 BC onwards) meant that the Roman military relied more than ever on soldiers from overseas territories. These men brought with them their own particular religions, superstitions, myths and beliefs from their homelands.

Not only this, but the legions also placed so much emphasis on togetherness that their legionary standard (Aquila: Latin for "Eagle") almost become a symbol for a form of worship and reverence. To lose it was considered such a symbol of disgrace and tragedy, that soldiers willingly risked their lives in a battle for the sole purpose of trying to win it back.

FIND OUT MORE ABOUT CULTS OF THE IMPERIAL LEGIONS

While the Romans had always held extravagant state festivals to gods like Jupiter and Mars, nearer and dearer to most Roman families was a simple, household-based religion focused around local and familial spirits.

The worship of these spirits is what truly defines Roman religion, and what really separates it from the sister religion of Greek paganism.

FIND OUT MORE ABOUT THE ROMAN DOMESTIC CULT

The Cult of Isis

The Cult of Isis was, thanks to Ptolemy, Hellenized to a degree that the Roman mind could understand it, and yet still foreign enough to be exotic and alien, which was part of its appeal to many Romans.

When the cult of Isis swept into Rome via Hellenistic sailors and Egyptian emigrants, it became extremely popular with women and the lower classes, including slaves. Fearing a religious unification of the lower strata of Roman society, and fearing the loss of piety in the traditional Roman gods of the state, the Senate repeatedly placed restrictions on the new cult.

FIND OUT MORE ABOUT THE CULT OF ISIS

The rise of Christianity to dominate western religion may very well have been inevitable, but certain key moments along the way helped to secure this position. The emergence of Christianity in the Roman Empire was based on many factors, and its spread was an indication of massive social upheaval and changing environments.

Click on the link below for a comprehensive article on Christianity in the Roman empire, including its origins, its spread, the persecutions of Christians, and a list of the Popes of Rome from 32-483 AD.

FIND OUT MORE ABOUT CHRISTIANITY IN ANCIENT ROME

Did you know...
The Romans had hundreds of different gods. This entire collection of all of their gods was called the Pantheon.

A list and description of the many different gods and goddesses that were worshipped by the Ancient Romans.

While the rise of Christianity to dominate western religion may very well have been inevitable, certain key moments along the way helped secure this position.

The head priest of the Roman state religion was the Pontifex Maximus. The main duty of the pontifices was to provide the pax deorum, or the 'peace with the gods'.

CLICK HERE TO READ MORE
The Dancing Lares and the Serpent in the Garden: Religion at the Roman Street Corner
by Harriet I. Flower

In this comprehensive and richly illustrated book, the first to focus on the lares, Harriet Flower offers a strikingly original account of these gods and a new way of understanding the lived experience of everyday Roman religion.

In this ambitious and authoritative book, Jörg Rüpke provides a comprehensive and strikingly original narrative history of ancient Roman and Mediterranean religion over more than a millennium?from the late Bronze Age through the Roman imperial period and up to late antiquity.

CLICK HERE TO READ MORE
Religion in the Roman Empire
by James B. Rives

This book provides an engaging, systematic introduction to religion in the Roman empire.

Roman Religion: A Sourcebook provides an introduction to the fundamentals of ancient Roman religious beliefs and rituals through a rich collection of ancient source readings.

This book, which includes a new preface by the author, offers an engrossing portrayal of the early years of the Christian movement from the perspective of the Romans.