Decline of the Roman Empire


The Decline of the Roman Empire

With the death of Marcus Aurelius in AD 180, rule of the empire passed to his 20 year old son Lucius Aurelius Commodus. Much like the reign of Gaius Caesar (Caligula) a century and a half earlier, the accession of Commodus was initially met with general approval. Continuing the parallel, initial acceptance was eventually met with dismay and hostility as the young emperor engaged in various forms of debauchery and ego-maniacal behavior.

The concept of imperial decline beginning with the reign of Commodus is largely adapted from Edward Gibbon's rather arbitrary work, "The Decline and Fall of the Roman Empire" and may have been a bit premature considering that the western empire endured for another three centuries. However, Gibbon's assessment is astute in pointing out several elements that clearly identify a change from previous eras.

The accession of Commodus as the son of Marcus Aurelius marked the re-establishment of dynasty that was originally developed under the Julio-Claudians. While the remaining years of the empire, especially the tumultuous 3rd century, would hardly be characterized by uninterrupted dynastic rule (in large part because of assassination and civil war), Commodus' reign marks the end of the adoptive period that provided immeasurable political stability since the death of Domitian. Never again would Rome benefit from rulers who had the foresight to understand the stability provided by selective succession and rather allowed personal and dynastic ambitions to play its role in the empire's eventual collapse. Over the course of the next 50 years following Commodus, the empire would have no less than 26 different rulers and usurpers, in comparison to 18 confirmed Princeps over the empire's first 2 centuries.

Despite the role of politics in the ultimate failure of the west, there were many other elements at work. While the influence of the legions and the praetorians continued to effect politics, there were periods of continued military strength, such as the reign of Septimius Severus. However, long periods of civil war took its toll on the population and the legions, and military institutions began to slowly degenerate in much the same manner as political and social institutions. Recruitment eventually shifted to the border provinces, and much later still it developed akin to the hiring of a "barbarian mercenary" force.

The legions were eventually altered from an army of conquest and economic plunder to a standing army of border guards. Such conditions have been associated with the reduction in military discipline and training standards. What once accounted for the main source of economic contribution to the overall state was now nothing more than a massive liability. In addition, the mass citizenship incorporation of Caracalla in AD 212 also had the effect of minimizing the incentive for legionary/auxiliary enrollment. Despite this, the collapse of military tradition was still some time off and the later 2nd century AD only began to set the stage for the development of these conditions.

Perhaps the most important factor associating the era of Commodus as the beginning of imperial decline was the status of the Roman economy. The lack of slave imports via military conquest in an agrarian slave labor economy, the absence of military plunder, the limited supply and expense of valuable metal extraction which undermined the monetary system, the cost of grain doles, public welfare (alimenta) and appeasement of the populace through expensive games (ie bread and circuses), the growing bureaucracy, cost of luxury imports, etc. all played pivotal roles in weakening the economic state. The increase in taxation, which developed into what might be considered a form of legal extortion, to compensate for the high cost of operating the state was not only economically stagnating, but had the effect of limiting voluntary contributions from the aristocracy and otherwise wealthy citizenship.

The effects of two major plagues within a century and the barbarization of the citizenry also had their own roles to play in destabilizing the empire of the late 2nd and 3rd centuries. The Parthian campaigns of Lucius Verus and the Danubian campaigns of Marcus Aurelius also had the effect of massively draining a surplus treasury left over by the frugal Antoninus Pius. Perhaps an energized and more experienced successor to Marcus Aurelius may have understood the potential benefit in seeing the Germanic Wars through to the conclusion envisioned by the emperor. The settlement desired by Marcus Aurelius included imperial incorporation of his conquests in the form of new provinces (Marcomannia and Sarmatia). While the wars did temporarily allow for peace along Rome's northern frontier, completion of the effort may have provided a temporary boost to the struggling economy and opened up new opportunities. Instead of the potential for new opportunity, however the rule of the western world was left to Commodus.

Edward Gibbon (1737 - 1794) was an English historian and Member of Parliament. His most important work, The History of the Decline and Fall of the Roman Empire (see "Recommended Books" on this page for more information), was published in six volumes between 1776 and 1788.

"Decline of Empire" Index of Pages 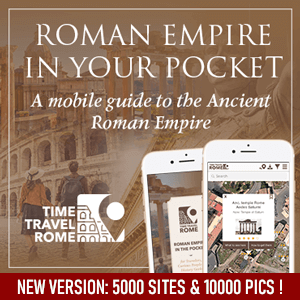 Books Related to the Decline of the Roman Empire:

The Fall of the Western Roman Empire: Archaeology, History and the Decline of Rome
by Neil Christie

One of the distinctive features of Christie's book is the interplay he allows between history and archaeology, showing the reader the kinds of theme best illuminated by textual evidence and those where developments in archaeology have proved more fruitful.

The Sack of Rome by the Visigoths in 410 AD: The History of the Event that Marked the Final Decline of the Western Roman Empire
by Charles River Editors

This book analyzes the history and legacy of the most famous sack of the Eternal City. Along with pictures depicting important people, places, and events, you will learn about the 410 AD Sack of Rome like never before, in no time at all.