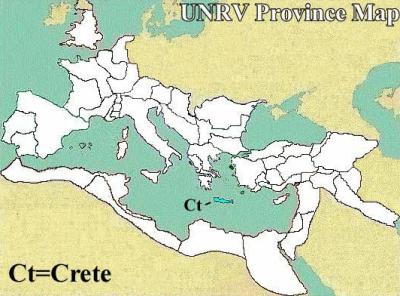 The island of Crete was a cradle of early human advanced civilization. Home to the Minoans, Crete reached its point of greatest power around 1600 BC, but later Greek colonization brought the island into the Hellenistic world. City states were established and intense rivalries developed between cities such as Knossos, Cydonia and Gortyna.

Despite these rivalries and intermittent wars, Crete was able to maintain itself as a virtually independent state from that of mainland Greece. Close ties were developed, simply due to cultural similarity, but Crete was never a major player in mainland affairs in its post Minoan history.

Civil wars between the rival cities destabilized the island and by the time Rome began to expand beyond Italy in the 3rd century BC, other external forces were beginning to take an interest. Ptolemaic Egypt attempted to invade Crete between 267 and 261 BC, but was not able to unify the warring states. Continued civil instability led to the intervention of Philip V of Macedonia in 220 BC. Allying with the city of Gortyna, Philip brought some measure of peace but inevitable brought it into conflict with Rome. In the Macedonian Wars of 214 - 196 between Philip and Rome, Crete sided with Philip, though with little consequence. Eventual Roman victory forced Macedonian withdrawal, but events in other parts of the Mediterranean left Crete to its own rule. Roman influence was soon to follow, however as they would be forced to fill the void left after the stability of Philip.

The three powerful cities of Knossos, Cydonia and Gortyna again returned to civil war as a method of exerting full authority. The Romans intervened several times with ambassadors, in 184, 180 and 174 BC, but the island remained embroiled in war. The instability created a perfect environment and haven for piracy and Rhodes attempted to bring order to the situation. In 154 BC, they invaded their island neighbor but were badly beaten. Only the intervention of Rome prevented a disaster. As Rome increased its influence over the Hellenistic world, forcing the decline of regional authority such as Greece and Macedonia, piracy grew to epidemic proportions.

Piracy reached its Mediterranean zenith between the 2nd and 1st centuries BC, and the primary sources were bases in Cilicia and Crete. The Roman wars against Mithridates VI of Pontus had close ties to piracy, as he needed them to disrupt Roman shipping and supply. The pirates attacked throughout the Mediterranean and virtually owned the sea. By 74 BC, the Senate had had enough of piracy and along with the knowledge of Crete's large wealth from pirate plunder, ordered the invasion of the island. Marcus Antonius, father of the famous future triumvir, was charged with the task but he was poorly prepared. The invasion was unsuccessful and Antonius suffered a humiliating defeat. Many Romans were captured, but the war with Mithridates continued and the slave revolt of Spartacus delayed retaliation for several years.

By 68 BC, the Senate ordered Crete to return its prisoners and submit those who opposed Antonius to Roman punishment. Crete, obviously refused, having demonstrated a long history of repelling invaders, and the Senate commissioned a new command against the island. Quintus Caecilius Metellus was authorized to undertake the conquest of Crete. Having much success in taking individual city states, Metellus' campaign was harsh. By the time, hope seemed lost for resistance, Pompey the Great had been authorized with a sweeping command against eastern piracy and made great strides. The Cretans were finished but in a last show of resistance, they refused to negotiate the final surrender to Metellus, offering instead to only submit to Pompey. Accepting the offer Pompey received much credit, and deservedly so on the mainland, but it was Metellus who truly conquered Crete. Despite being dismissed initially by Pompey, Metellus would eventually return and complete the pacification by 63 BC. As a reward for his service, he was offered the congnomen 'Creticus'.

Once pacified, the Cretans settled into Roman rule with little resistance and the island became a mostly uneventful backwater province. Initially it was organized as joint province with that of Cyrenaica on the African coast, but geographic inconvenience had Diocletion separate the two in 298 AD. Constantine later reconnected it to Illyria, but it remained in little need of forceful administration. Other than Gothic raids in 269 AD, Crete remained a peaceful and prosperous province for the great bulk of Roman rule. It remained a part of the Roman and Byzantine empires through to the 13th century, with some interruption by Arab conquest in the 9th century AD. Crete offered standard imports from the region such as olive oil and wine which was supplemented by grain. Crete at the time, however, was heavily forested and provided excellent timber to builders throughout the empire.