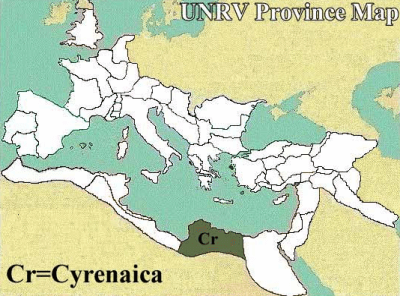 The North African territory of Cyrenaica, now encompassing modern Libya, was likely originally settled by Berber tribes. The Greeks began to colonize the area in the 7th century BC, establishing cities such as Cyrene which became a bastion of Hellenized culture on the African continent. Phoenicians began to influence Cyrenaica shortly thereafter, through trade and colonization of their own, and the Carthaginians maintained considerable influence prior to Alexander.

With the conquests of Alexander, Cyrenaica fell completely under the sway of Macedonian rule in 331 BC and would remain so indirectly for another 250 years. Though Alexander died in 323 BC and his conquests were divided up, the Macedonian rulers of Egypt, the Ptolemies continued to have periodic control of Cyrenaica. Jewish migrations, from various places such as Egyptian Alexandria changed the ethnic and social landscape to some degree, and civil disturbances began to crop up as a result.

In 96 BC, the King of Cyrene, Ptolemy Apion died and willed Cyrenaica to Rome as he was without heirs. The political situation of the entire Ptolemy line of Egypt and its territorial possessions was in continuous turmoil at this time, just as Rome was rising as a world power. Rome readily accepted this 'gift' from Apion but left administration to local governors, rather than take direct control. By the 70's BC, civil uprisings by Jewish settlers began to take its toll, and the Senate was forced to act. In 74 BC, a low level magistrate, quaestor Cornelius Lentulus Marcellinus, was commissioned to officially annex Cyrenaica as a Roman province and quell and potential disorder. His low position not only was an indication of the political difficulty in governing the growing empire under the Republican system, but of the relative ease in which Cyrenaica was willing to succumb to Roman stability.

The province was the domain of two of the second triumvirs Marcus Aemilius Lepidus and Marcus Antonius between 43 and 31 BC, and during that time it's likely that Antonius raised the Legion, III Cyrenaica. Though it only served in Cyrenaica a short time, as it was stationed in Egypt throughout most of its history, the legion proudly carried the name of the province in the service of Rome for nearly five centuries. The province remained mostly peaceful throughout Roman occupation, but during the reign of Trajan a massive Jewish revolt, led by a Jew claiming to be the Messiah, Lukuas, caused widespread devastation. Between 115 and 116 AD, tens of thousands of residents, Greeks, Jews and Christians perished during the uprising until Trajan put it down with brutal force.

Disharmony continued between the social and religious classes under the reign of Hadrian, who suffered another Jewish revolt in Judaea, led by Simon ben Kosibah. Though Cyrenaica remained relatively quiet through this problem, Hadrian punished the Jews throughout the empire severely, essentially eliminating resistance for the remaining life of the empire. The great city of Cyrene, however, took years to recover and never really regained the prosperity it had once maintained. Overall, though, it remained a peaceful part of the empire until it was split to the eastern empire in the late 4th century AD. Vandals raided the region in the early 5th century, but the Byzantines re-exerted limited control for another 2 centuries. It remained a part of Roman/Byzantine tradition until the Arab conquests in 642 AD.

The economy of Cyrenaica was mainly based on its vast agricultural wealth. An abundance of grain and various Mediterranean specialty crops were grown and exported throughout the empire. Great herds of sheep and other livestock were maintained and some quantity of precious metal was available. The single most important product from Cyrenaica however was medicinal plants. The Silphium Plant grew in various parts of the African coast, but it was only abundant and highly prized from a small stretch of land on the coastal plateaus near Cyrene. Perfumes were made from its flowers, the stalk provided various forms of foodstuffs, but the root and its juices provided a coveted ancient medicine.

Silphium was used as a remedy for sore throats, fevers, indigestion, seizures and various aches and pains. The great Roman historian Pliny added in his 'Natural Histories' that the plant could be used to treat leprosy, as an antidote for poisons, hair restoration and as a cleansing aid in childbirth. A tea made from its leaves provided an effective birth control that was similar to related abortion inducing plants of more modern times. Highly valuable and restricted in meaningful growth to Cyrenaica, it brought incredible wealth to the province in the early empire, but unfortunately it didn't last long. Its great versatility and demand in Roman markets virtually wiped it off the face of the earth and unfortunately was considered extinct by the end of the first century AD.