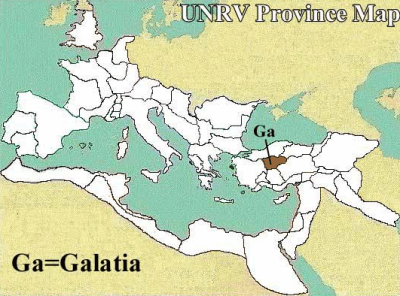 The territory in modern central Turkey known as Galatia was an oddity in the eastern world. An area in the highlands of central Anatolia (now Turkey), it was bounded on the north by Bithynia and Paphlagonia, on the east by Pontus, on the south by Lycaonia and Cappadocia, and on the west by the remainder of Phrygia. It was originally home of the ancient civilization of the Hittites, but came to be occupied by Gallic Celts in the 3rd century BC, hence Galatia, or "Gallia of the East."

The Gauls had migrated east and south during the reign of Alexander the Great in the late 4th century BC, but he held them off and pushed them back towards the Danube.

A couple of generation later, around 280 BC, the Gauls were on the move again, first settling in Thracia and then continuing south into Macedonia and Greece.

Led by a second 'Brennus' (the first being the Brennus who sacked Rome in 390 BC), the Gauls stormed through Macedonia and Greece, sacking Delphi and causing a great deal of disorder before being stopped at the Dardanelles. Brennus was killed and the Gauls were forced to look for new opportunities elsewhere. As luck would have it, King Nicomedes I of Bithynia was deeply embroiled in a dynastic struggle with his brother.

The homeless Celts would prove to be the perfect mercenaries accepting an invitation to join Nicomedes. They crossed the straights from Thracia to Asia Minor with upwards of 20,000 people, including women and children, and fell into a role as mercenary warriors that they would relish for the next couple of centuries.

Helping establish Nicomedes on the Bithynian throne, the Gauls were awarded with living space on the Anatolian plateau. There they continued to live in their tribal lifestyle, essentially established in three separate tribes. The central part of Galatia belonged to a tribe known as the Tectosages, who established a capitol at Ancyra (which bears the name Ankara, Celtic for Anchor, today). In the west the Tolistbobolii took up residence, with their capital at Pressinus, and in the East the Trocmi established themselves at Tavium. They were loosely organized as was Celtic custom, but did establish a national council which brought together representatives of each tribe to deal with issues that affected the community as a whole.

Much like their Hittite predecessors, the Gauls found that the central plateau was a perfect launching point for raids on their surrounding neighbors. As fierce warriors they proved to be a constant source of trouble in the region, overrunning their former hosts in Bithynia and plundering all around them with little resistance. Between 235 and 225 BC, however, King Attalus of Pergamum finally was able to hold the Gauls in check, inflicting several defeats on them, but conceding their right to occupy Galatia. Though the Gauls were weakened, they still continued to be a constant source of aggravation.

Real Roman contact with Galatia came during the Syrian War against Antiochus. With the death of Attalus in Pergamum, circa 197 BC, raids west into Asia Minor began anew, and the Gauls soon found themselves as mercenary allies of the Syrian King. Rome, however, allied to Pergamum was forced to finally take matters into their own hands, launching an expedition under Ca. Manlius Vulso in 189 BC. His invasion, and the war against Antiochus, led by Scipio Africanus and his brother Gnaeus, was wildly successful and Roman influence spread deeply into the east.

The Galatians soon fell under the sway of the great Roman enemy, Mithridates. In the early to mid 1st century BC, the Celts were under the thumb of Pontus, but remained surprisingly loyal to Rome. During the campaigns of both Sulla, and later Gnaeus Pompeius Magnus, the Celts proved formidable allies in the cause. With Pompey's victory, the Galatians were organized as a client state in 64 BC. Despite the existence and apparent recognition of Celtic custom by Pompey, the 3 tribe system was soon uprooted by the efforts of one chief, Deiotarus.

The Romans, however, were soon occupied with their own internal political turmoil, the war in Gaul under Caesar, and the civil war that followed. The Galatians, despite their political and government shift remained mostly quiet, and the Romans formally recognized Deiotarus as the Galatian King.

This political situation remained in effect until after the victory of Octavian in the second civil war, and his ascension as Augustus. In 25 BC, the third Galatian king, Amyntas died, and Augustus formally incorporated Galatia into an official Roman province. From that point on, Galatia remained a provincial backwater, with little economic exploitation or political dissent of any kind. The Galatians remained loyal to the empire throughout its history.

Contributing to this loyalty, the Celts were inundated with Hellenistic culture, and later writers referred to the inhabitants as Gallo-Graeci. Celtic culture continued to flourish as well, however, and the people were still known to speak a Celtic tongue similar to that of the Gallic Treveri as late as the 5th century AD. This culture however had all but faded away by the time the Seljuks took the region from the Byzantines in the 11th century AD.

Galatia also became an early stronghold for the Christian church. The Apostle Paul visited the province around 55 AD and wrote his Epistle to the Galatians. The Celts apparently took to his teaching in earnest and the early church spread and flourished.