guy created a topic in Numismatica 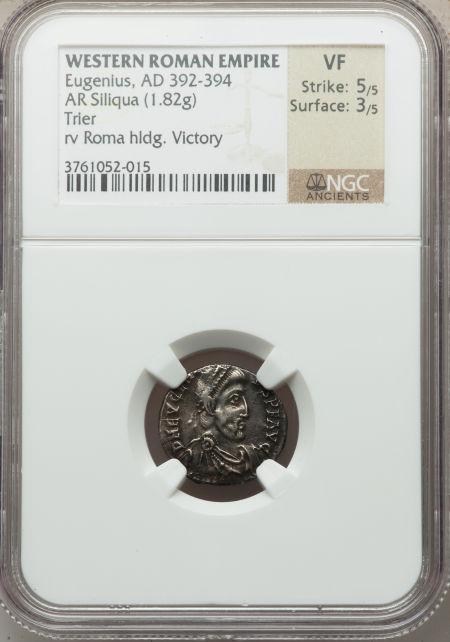 Eugenius: Numismatists Getting the Evidence Wrong

As someone who doesn't collect coins, I have frequently admired the ability of experts in Ancient numismatists to decipher the sometimes scant evidence to better understand Ancient Roman culture and history.


Eugenius was elevated to the purple by the Frankish general Arbogast during the reign of the Emperor Theodosius.

The traditional story was that Eugenius was very sympathetic to the Pagans and he really was only a nominal Christian. He certainly had the support of the predominately Pagan Roman Senate (despite possibly strangely not being confirmed by that pro-Pagan Senate).

According to popular history, Eugenius promoted some of the Pagan policies and
supported Pagan temples, both of which had fallen out of favor because of
recent intolerant Christian emperors. He and his general Arbogast, however, lost
the pivotal and bloody battle of Frigidus against the militantly Christian Emperor
Theodosius. Both the usurper and his general soon lost their lives: Eugenius
was captured and killed, while Arbogast committed suicide. Eugenius was the
last emperor to support polytheism.

Many historians cling to the idea that this was the last stand
of the noble and enlightened Pagans against the intolerant and culturally
ignorant Christians.

Numismatists have supported this rendition of history, too. They
point out that Eugenius wears a beard on his coin (rare among
Christian emperors). This, they contend, is indicative of Eugenius' being a
philosopher and, thus, more tolerant of Pagans. But wait. This widely accepted
story might be incorrect.

Alan Cameron in his book The Last Pagans of Rome reminds us that
Eugenius was a teacher of rhetoric, not philosophy. Cameron mentions incidentally
that Christ, the apostles, and the saints are also shown in the style of
philosophers with a beard.

After plowing through this dense and scholarly tome by Alan Cameron,
I may have now changed my opinion about the relationship among the fourth
century Christian and Pagan communities. Cameron may have successfully
dismantled the romantic mythology of Pagans being the last bastion of enlightened
ancient culture fending classical civilization against the darkness and
ignorance of Christianity.

Here are two good reviews of the book:

Eugenius' power grab might need to be assessed with this alternative (and thoroughly researched and convincingly argued) background in mind. Eugenius might not have been the last great "hero of the
Pagans" once imagined by Pagan romantics and apologists.

This is one case where the numismatists may have drawn the incorrect conclusions from the evidence.