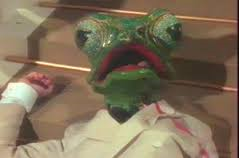 Warning: In this blog, I do use the word ‘Bitch’ more than once. I’m not a misogynist.

Welcome to GhostOfClayton’s Twice Fortnightly blog. Allow me to introduce myself to new bloggees. I’m a bitch, I’m a mother, I’m a child, I’m a lover, I’m a sinner, I’m a saint. Yes, I stole that. It’s a lyric from Meredith Brooks’ very catchy track, ‘Bitch’. She goes on to say, “I’m your hell, I’m your dream, I’m nothing in-between. You know you wouldn’t want it any other way.” I always feel that the long-suffering Mr Brooks probably would want it another way. Especially after the first 10 years of marriage. She sounds quite high-maintenance to me.

Well here we are once again, that annual midwinter dog and pony show they call Christmas . . . hang on a minute . . . I’m getting déjà vu here . . . that’s right, I already did a blog all about Christmas. I shall just refer you to it. You can find it here. That’s saved me a good few minutes of my life. For those interested, I used it to go and get a cup of coffee.

I love the Java jive, and it loves me

Mrs OfClayton has started to make me tea, if ever she puts the kettle on (reading that back, it sounded a little snide. It wasn’t meant to be. We don’t have any fixed system, or keep records, but I reckon we are about fair and equitable when it comes to making a hot beverage). The reason for that is that she has recently got it into her head that I drink too much coffee when I’m not tour-guiding. Little does she know, but I probably drink too much coffee when I am tour-guiding. I don’t smoke, don’t take any non-prescription drugs, drink alcohol only very occasionally, and am on an almost permanent diet, so coffee is my only vice. Surely it’s OK to indulge one chemical addiction, isn’t it?

I’ve already mentioned in a previous blog that I need to have paid work to keep the wolf from the door during the off-season. I’m reminded of the winter when I was given a job with a project team that were helping to implement a computer system for a large pharmaceutical manufacturing site. The team had been relocated into a portakabin some way outside the main office block, and thus isolated from the drinks dispenser. The portakabin was ordered by a guy called Ken, and so became referred to as The Kendyhouse. Anyway, it was a particularly bleak and gusty winter that year. The winds did their best to ensure that what little coffee was left in your cup after carrying it to the Kendyhouse, was tepid at best. Not a happy situation for caffeine addicts like myself and the contract programmers on the team (contract programmers need it to stimulate creativity, I think). The project manager relented, and bought in a filter machine for us, which sat on a filing cabinet right next to my desk. This meant that I barely had to lift one arse-cheek off my chair in order to refill my coffee mug. Happy situation for me, if not my body.

My body was to get more bad news when a new contract programmer arrived about a week or so after the filter machine; you see, he had come to us from Taylors of Harrogate. For those not aware of this company, they are one of the leading suppliers of teas and coffees in the UK, and are positioned quite ‘up’ market. Now, whilst working at Taylors of Harrogate, this contract programmer had acquired (by fair means or foul, I don’t know, but I do know he didn’t pay for them) a large amount of their premium after dinner filter coffee ‘Hot Lava Java’, a dark, rich, aromatic, and highly caffeinated coffee, which he gladly donated to the cause.

So there I was, drinking mug after mug of very strong coffee. I didn’t feel any medical detriment at all, if I’m honest. The only real detriment was to my conscience. I felt guilty that I was probably chemically abusing my body in ways that I daren’t look up on the internet. I wasn’t on my own either. I sat opposite a bright young lad with a prestigious honours degree in geology, who’d been brought in to do low-level paper-pushing at some obscenely low pay grade. He too was feeling the twinges of guilt, and so (after a particularly heavy coffee session one Friday) we decided that we would give up coffee.

I will now describe the symptoms that plagued me following the withdrawal of my drug of choice:

It was the worst 15 minutes of my life.

I jest, of course. I lasted until Saturday afternoon, when I had a cup of tea (people say there’s more caffeine in tea than coffee. Look them square in the eye and make sure they know that they’re talking bullshit.) By Saturday evening, I’d had a cup of Nescafe, just to ease the symptoms, you understand. More on Sunday. By Monday I was back to square one.

I have vowed never to give up coffee again. It was a bitch!