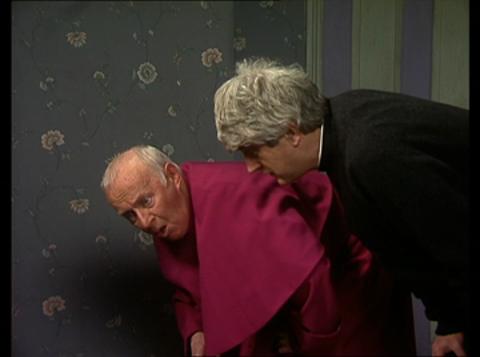 What do you think to the title? Bit rude? Bit adult? Hey, I can do blogs that�re �edgy�. In fact, there are those in the world that will almost certainly find the following down right offensive. There are those who say it�s high time I did a controversial blog. So here goes:

It may have passed the rest of the world by, but the Church of England had a vote recently on whether or not they should allow women to be ordained as bishops. In the end, they voted against, some people were delighted, some people were devastated, the world kept turning, and now the big news is tomorrow�s fish �n� chip paper. No one�s that bothered any more, now that a few days have passed. I know what you�re thinking. GhostOfClayton is some kind of Arch-Atheist, and that will have made his blood boil with sheer frustrated anger. Firstly, I don�t see myself as an atheist. Richard Dawkins is an atheist. He has that same degree of fervour and passionate belief that religious people have. He�s religious about atheism. I�m not. Normally religion has no impact whatsoever on my life, and I try not to have an opinion on it. It seems to offer some benefit to religious individuals (though it seems to have been pretty disastrous for mankind), so who am I to poke my nose into their affairs? So why am I blogging about it, if I care so little? Is it because they rejected women as bishops? No. My personal morality, as a good egalitarian, is that we�re all equal, and that we should all have the same opportunities in life regardless of our age, gender, beliefs, sexual orientation, skin colour, etc., etc. However, that�s just my personal morality. My personal morality also tells me that I shouldn�t try and project my personal morality on anyone else. If they want to take an institutionally non-inclusive position, that�s their business, much as it�s their business if they hold somewhat disconcerting views about gay people.

However, what the whole lady-bish episode did highlight to me was a significant hole in the inclusivity of our age old British democratic system. Did you know that 26 seats in the House of Lords are reserved exclusively for Church of England bishops? Part of every UK resident�s life, whatever their religious belief, is still controlled by the Church of England. And to add insult to this anachronistic injury, the Church of England has just proved that it isn�t fit to exercise any kind of constitutional power, due to its institutional misogyny. Now�s the time to imagine my blood boiling with sheer frustrated anger. No other body has this automatic right to power (it�s just possible that this statement isn�t true, but if you want to read a blogger that checks their facts, good luck finding one � for the purposes of this blog, it�s an absolute truth).

Anyway, we don�t live in a perfect world, and one angry blogger with an optimistic total of three readers (who probably don�t agree with him anyway) isn�t going to change that one iota. My personal morality should possibly keep its gob shut and get on with its own business. It�s nice to have an occasional rant, though.

PS If you�re not sure why the title of this blog is rude/adult, Google it. You may want to check over your shoulder to see who�s about before you start typing, though.