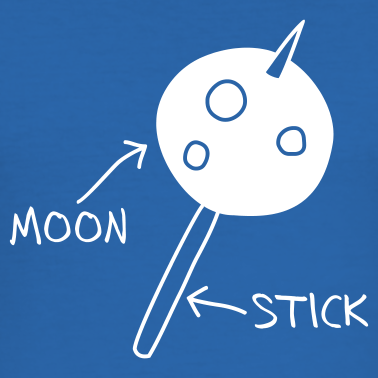 Warning: This blog contains a word that I’m not sure about, but may be a swear word. I don’t even know how to spell it, so you’re probably on safe ground.

Welcome to GhostOfClayton’s Twice Fortnightly blog. Allow me to introduce myself to new bloggees (yeah, right!). I am a tour guide specialising in hiking tours of Hadrian’s Wall, and am widely regarded as the thinking woman’s man-totty. 50% of the previous statement is true, which should be a guide to how much of the following you should believe.

How to reach the moon in 200 very easy steps

Is getting your hair to the moon the same as ‘you’ reaching the moon? If not, how much of ‘you’ would have to reach the moon to say ‘you’ had reached the moon? Is a strawberry dead? These are the sort of philosophical questions that I won’t be touching with a barge pole this week. What they do do, is give me the opportunity to tell those of you who haven’t already heard about it, all about a really exciting endeavour that’s doing the news rounds at the moment. You see, a blog is a very powerful tool for good. I can use it to reach out to all of you (alright, both of you), and spread the word about how you can make the world a better place (arguably).

I am referring to a little enterprise called Lunar Mission One. You can read all about it on their website (www.lunarmissionone.com), or you can hear it from my inexpert and opinionated self. The decision is yours. Ah . . . you’re still here . . . . good choice.

You see, some boffins have taken it upon themselves to put a probe on the moon, and are funding this gargantuan project using kickstarter money. This is the on-line equivalent of sitting outside Marks & Spencers with a begging bowl and a bored dog, although the ends are considerably more worthy than four cans of super strength lager. So, what is my incentive to dedicate part of the OfClayton Fortunes to this very worthy venture? Well, at the cheaper end (three British pounds) you get “Our eternal thanks”. Nice, but as OfClayton Senior used to say, put eternal thanks in a bucket, and you’ve got an empty bucket. Part with more wonga, and the benefits steadily increase, through a subscription to the newsletter, membership of the ‘Missions Club’, and so on, until (at £60, you can ‘Reserve your place in space’). Yes, honestly. No doubt, you are now dreaming of the moment you place your boot print in the dusty Lunar regolith and say something hugely profound about the size of your step, before a bunny hopping tour of a cratered landscape, under the patient gaze of the blue marble that is Mother Earth.

No. Put that right out of your head.

‘Reserving your place in space’ bags a few kilobytes on a USB stick (or similar) for you to write your digitised photo/message/symphony, etc., and that USB stick will live out eternity on the moon. At least until some far-future astronaut tries to plug it into his iPhone 42 and a ‘501 error’ is returned due to compatibility issues (even after he switches it off and back on again.)

No, you will need to have to start shelling out much more before ‘Your place in space’ is realised. £200 will put you on the moon. Not all of you, granted. You will have to leave a small part of you behind. That small part will consist of everything that isn’t a single strand of your hair. But you will be on the moon for eternity.

Do I sound cynical? I am not. This is fricking awesome stuff. I wish it well, and really hope it comes off. That’s why I’m blogging about it, to try and spread the word. Look, I’ve even put sensible tags at the top of this blog. My track record isn’t good for taking tags seriously, so that should tell you something. So, will I be investing? I’m still torn. My ‘easy come, easy go’ attitude to money is apparent to anyone who has followed my adventures so far. So, yes, it would be quite plausible if a few quid did ‘easy go’ towards this laudable enterprise. Trouble is, when you have an ‘easy come, easy go’ attitude to money, and you need some money to fulfil your duty to the second half of that attitude, you find that the money you gained from the former half already ‘easy went’ somewhere else.

The Moon on a Stick

Looking at the above, it’s apparent that Mohamed won’t be going to the Mountain, figuratively speaking, anytime soon. So you know what you want? You want the Moon on a Stick. Ha Ha. A large group of people will recognise that catchphrase, albeit a Venn Diagrammatically discrete group from the group of people who read this (i.e. you). Hold onto that thought, though. Clarity will come later.

As most (both) of you know, I spend an awful lot of time in planes, trains and automobiles. I used to listen to a huge amount of music to while away the hours, but fan that I am of good music, I did start to yearn for something a little more intellectually stimulating after Regina Spektor’s ‘The Calculation’ came round for the 6th time. It was then I started listening to Podcasts. Now, there are prolific podcasters, and high quality podcasters, but very few who manage to pull off both tricks at the same time. One podcaster who seems to achieve this with a reasonable degree of ease is a comedian called Richard Herring. He, along with his comedy partner of the time (a guy called Stewart Lee) were very big in the UK in the late 80s and early nineties, but then disappeared from the schedules to a degree. Stewart Lee is now back on the small screen now and again, but Richard Herring has eschewed the strict requirements of language/behaviour/taste imposed by big broadcasters, in favour of the more experimental (and un-censored) comedy vehicle that is the internet.

Now for that moment of clarity I promised you earlier. A sort of catchphrase of Richard Herring’s when he and Stewart Lee were on the telly was, “You want the Moon on a stick.”

You might think that the above two articles aren’t too closely related over and above the inclusion of the word ‘Moon’. Not so. You see Richard Herring is also using crowd funding to raise cash for comedy projects delivered over the internet, and I’d also like to use the power of the blog to spread the good word. www.richardherring.com is where to go to donate, or to find routes to all his free comedy material. It has my personal recommendation. It will make you laugh, and therefore make you happy.