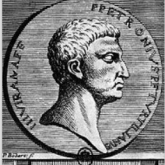 Gentes patricae during the early principate