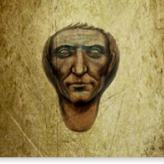 Frequency of Christian crimes against the state