Roman Male Dress - The Tunica and the Toga 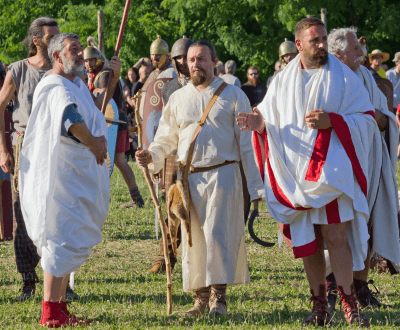 Roman men generally wore two garments, the tunica and the toga. The tunica was a short woolen under garment with short sleeves. By contrast, to wear a long tunic with long sleeves was considered effeminate and was generally avoided by society as a whole. It was originally worn mainly by the working class plebes, freedmen and slaves, though its function as an undergarment for any class of people is attested.

As the toga was specifically meant as a public display garment, the tunica was also worn by any people within the comforts of their own homes. The tunic worn by patrician men was made from white wool or expensive linen, while the poor would wear whatever fabric was readily available. Similar to the toga, distinct tunics were worn to signify one's title. Magistrates wore the tunic augusticlavia, and senators wore a tunic with broad strip called the tunica laticlavia. In addition, a belt would be worn around the waist of the tunica to hold the waist of the garment snug, giving the impression of a two piece garment.

The classic toga was a distinct Roman garment that only actual citizens were allowed to wear. Its distinct purpose was to indicate peaceful endeavors, as opposed to the sagum cloak, worn during times of war. The toga was a large cumbersome robe like garment of white wool and used up to 9 yards of material. Being such a bulky and uncomfortable article of clothing, it became customary in later times to wear it only on state occasions. During the time of Augustus, however, he implemented a strict moral code requiring the toga to be worn in all facets of public life. As time passed and Roman societal tradition shifted and absorbed new cultures, these rules were relaxed. The more comfortable tunic, covered by a cloak called the lacerna, became commonplace in all facets of society.

All togas were not the same and each distinctive type could mark a Roman's societal status or title. Some common, known types:

Roman women also wore tunica in much the same fashion as the men. There were two types, both adapted from Greek fashion. One, the peplos was made from two rectangular pieces of cloth partially sewn together on both sides with the open sections at the top folded down in the front and back. It was pulled over the head and fastened with two large pins, forming a sleeveless dress. A belt was then tied over or under the folds.

The more common tunic worn by women was similar to the Greek chiton. This sleeved garment was made from two wide pieces of cloth sewn together near the top. This garment was pulled over the head and fastened with several pins or buttons to form a dress with various styles and fits. A belt could be worn under the breasts, at the waist, or at the hips. Any tunics could be made of various colors and fabric types depending on social status and wealth.

Married women were required to wear the loose, toga equivelant, stola. This long sleeveless tunic was strapped at the shoulder, gathered in and girdled at the waist with the garment extending to the feet. In addition, the pulla was a sort of shawl to throw over the whole figure, and to be worn out of doors. Fashion of the various times also indicated how much make-up, jewelry and perfume would be worn. Suffice to say that such adornments were as popular in the ancient world as in any time.

Footwear was mainly of two kinds, but was worn in many styles and customs. The rules for shoes weren't as strict as those for regular clothing. The calceus was a sandal like shoe strapped to the foot, mainly for internal wear. The soleae was a full shoe completely enclosing the foot, much more similar to the modern shoe. Shoes and sandals were made in varying materials and colors, again depending on social status. Leather was by far the most common material and could be easily dyed to reflect position such as red shoes for patricians.

Did you know...
A bulla is a type of necklace with pouch that was worn by ancient Roman children as a type of protection from evil spirits. The pouch was made of gold, leather, or cloth depending on how wealthy the family was. The inside of a bulla contained amulets or charms. The bulla was presented to a child at birth. A Roman boy would wear the bulla until he became a man and a Roman girl wore the bulla until she got married.