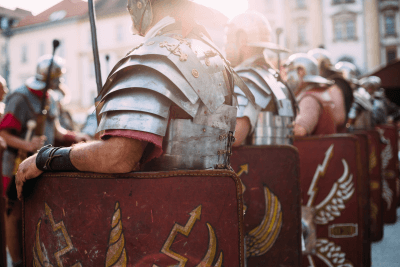 Evolving from the concept of a Legionary Legate's personal bodyguard, under Augustus, the Praetorian Guard was established as the same, but instead were directly attached to the Emperor. The headquarters of the legion, or praetorium, provided the name, and the practice was simply altered to encompass a much broader spectrum.

The Praetoria Cohors, as they were first known, was originated with the emergence of great soldier politicians, Scipio Africanus being among the first to adopt these personal guards. Formed from the best, bravest and most loyal of his own men, the Praetoria were generally exempt from any standard camp duties, save for protecting their general.

While the later imperators, such as Caesar, Antonius and Octavian certainly fielded their own personal guardsmen, it wasn't until Octavian's ascession as Augustus, or emperor, that the Praetorian Guard as an institution was established. In the turmoil of nearly a century of civil war and social strife, Augustus saw the need to establish a body of soldiers explicitly loyal to himself. These guardsmen, unlike other military units, engaged in combat or went on campaign only at the direct behest, or in the company of the Emperor and the Emperor's family. Their primary role, of course, was the personal protection of the Emperor, but they also functioned as a police force both in Rome and other Italian cities, at least at their inception. Originally, Augustus wanted to maintain some Republican tradition, as well as avoid the appearance of tyrannical control. Therefore, those praetorians stationed within the walls of Rome weren't allowed to wear the customary armor or uniform that has been widely depicted. Called the cohors togata, this name reflected that these troops wore a civilian toga, more like the Republican era lictors than soldiers. However, they were armed with the standard army issue gladius, as opposed to the fasces (or bundled wooden rods) of the lictors. Outside of Rome, and on the battlefield, a Praetorian would be equipped in much the same manner as any other Imperial Legionary.

At the onset, Augustus recruited 9 cohorts of about 500 men each, essentially equal to the size of an imperial legion. Each cohort was eventually swelled to equal that of the double-strength first cohort of an Imperial Legion, so that each cohort, from this time on, was generally made up of 1,000 men. Three of these initial 9 units were stationed in Rome while the other six were garrisoned throughout Italy. At first each cohort was under the command of an Equestrian rank Tribune, but by the turn of the millennium, Augustus had created the overall command position of the Praetorian Praefectus. The Prefects eventually became incredibly powerful political players themselves, and in some cases wielded more direct control and power over the empire than the Emperor. Set up as an institution with supreme loyalty to the emperor, they eventually became a formidable political force, in many cases, both eliminating the current Emperor and dictating ascension to the throne.

The Praetorians were originally recruited from among the best available veteran Italian Legionaries. Service in the guard was an honored position, and was considered elite status for a soldier. Contrary to popular opinion, the Praetorians, especially beyond the Julio-Claudian era, often went on campaign with the Emperor. Enemy incursions into Italy or nearby provinces were also often met by Praetorian defenders. As the deep interior of the Empire was bereft of troops in comparison to the frontier provinces, it could often fall upon the imperial guard to secure the interior empire. They also accompanied those emperors who functioned as generals while on campaign. Of notable example are Trajan in Dacia and Marcus Aurelius while he conducted the war on the Danube, and the Praetorians certainly were involved in heavy action.

Service as a Praetorian guardsman not only offered elite status, but in many respects offered considerable benefits to that of the standard legionary. The term of service was 16 years as opposed to 20 or 25 years in the legion. The opportunity for promotion was also excellent; as many Praetorians went on to serve as Centurions and other officers in the regular standing army. Pay conditions too offered a considerable advantage. Praetorians received sesquiplex stipendum, or pay and a half to that of the legions. Under Domitian, Praetorians made 1,500 denarii per year, making them rich in comparison to the average citizen. They were also eligible for special donativum which was generally paid upon an Emperor's ascension to secure the guard's loyalty. Additionally, such payments could be paid at any time, to once again buy their support against brewing trouble. Upon retirement, the Praetorian also received 5,000 denarii, a land settlement and a military diploma (as all legionaries received). Service for 16 years to the emperor could make a soldier considerably wealthy.

After the death of Augustus, under whose reign the Praetorians were unquestionably loyal, the political advancement of the guard began in earnest. During the reign of Tiberius, the Prefect Lucius Aelius Sejanus became a notorious tyrant using his power to liberally assassinate political opponents. His power rivaled the emperor himself, and only a falling out between he and Tiberius ended his reign of terror. It was during this period that the Castra Praetoria was built, and the Praetorians were moved into Rome in force. Tiberius' heir Gaius (Caligula) was murdered by the Praetorians in 41 AD because of his instability and perceived mockery of the military and Roman institutions as a whole. Claudius, his uncle was the first emperor to essentially be forced into power through the political machinations of the Praetorians. Though opposed by the Senate, the Praetorians threatened mayhem, and the Senate was forced to concede to Claudius as Caligula's heir. Claudius, however, despite early opposition would eventually be remembered by history as one of the most effective Emperors.

By 69 AD, the death of Nero began a civil war which eventually became known as the year of the 4 emperors. The Guard willingly altered loyalty between whichever man took power. One of these men, Vitellius, increased the Guard to 16 cohorts, totaling 16,000 personal men. Shortly thereafter, however, when Vespasian emerged as the eventual victor, the Praetorians were reduced back to a more manageable nine cohorts. His son Domitian increased the number of cohorts to 10 and this seems to have stayed in place for the bulk of the guard's remaining existence.

In 193 AD, after the murder of Commodus, the guard went beyond the traditional donativum and actually auctioned off the throne. Didius Julianus, a wealthy senator, bought the imperial office, but reigned only 66 days until he was murdered by the very men that put him there. Taking his place, Septimius Severus reformed the guard, essentially disbanding it for disloyalty. Unable to maintain the throne without a personal guard, however, he reformed it, but opened recruitment to all over the empire. He recruited heavily from amongst his own Legion in Pannonia and increased the size of the guard considerably.

Over the next century, the Praetorians were increasingly involved in plots to promote imperial candidates, eliminate those they were dissatisfied with, and effectively take command of the empire through their own political and military force. With minor periods of order, such as that of Aurelian between 273 and 275 AD, this pattern continued relentlessly until the rise of Diocletion. In 284 AD, he altered the status of the guard by developing the sacer comitatus. This imperial field escort essentially replaced the primary function of the Praetorians, eliminating them from strict guard duty and basically relegating them to the role of elite legionary force.

The Praetorians weren't done yet, however. They would have one final major play in the political machinations of the Imperial era. In the turmoil of the early 4th century AD, the praetorians supported the 'usurper' Maxentius against the emperor in the east, Constantine. At the battle of Milvian Bridge in 312 AD, as Constantine marched west towards Rome, the army of Maxentius was defeated. Constantine saw the futility of trusting the Praetorians any further and disbanded the units that remained, scattering the soldiers all over the empire. The Castra Praetoria in Rome was destroyed and after 300 years of service (and disservice) to the throne, the Praetorian Guard was no more.

Did you know...
The Milvian Bridge was built by Marcus Aemilius Scaurus in 109 BC. It was on the Flaminian Way near Rome. The Tiber River was part of the western defenses of Rome.