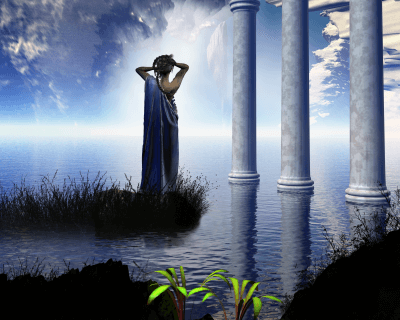 The Romans had many gods and goddesses. Most of these were the same ones that the ancient Greeks worshipped, except that they had different names.

The original religion of the early Romans was so modified by the addition of numerous and conflicting beliefs in later times, and by the assimilation of a vast amount of Greek mythology, that it cannot be reconstructed precisely.

Because extensive changes in the religion had already taken place before the literary tradition began, its origins were in most cases unknown to the early Roman writers on religion, such as the 1st century BC scholar Marcus Terentius Varro.

Other classical writers, such as the poet Ovid in his Fasti (Calendar), were strongly influenced by Hellenistic models, and in their works they frequently employed Greek beliefs to fill gaps in the Roman tradition.


Apollo is the son of Jupiter and Leto, and the twin brother of Diana. He is the god of music, playing a golden lyre. The Archer, far shooting with a silver bow. The god of healing who taught man medicine. The god of light. The god of truth, who can not speak a lie. One of Apollo's more important daily tasks is to harness his chariot with four horses and drive the sun across the sky. He is famous for his oracle at Delphi. People traveled to it from all over the Greek world to divine the future. His tree was the laurel. The crow his bird. The dolphin his animal.


Corn Goddess. Eternal Mother. the Sorrowing Mother. Grain Mother. Goddess of agriculture, grain, crops, initiation, civilization, lawgiver and the love a mother bears for her child. Protectress of women, motherhood, marriage. Daughter of Saturn and Ops. She and her daughter Proserpine were the counterparts of the Greek goddesses Demeter and Persephone. Her worship involved fertility rites and rites for the dead, and her chief festival was the Cerealia.


Fertility Goddess. Moon Goddess. Huntress Goddess. Triple Goddess- Lunar Virgin, Mother of Creatures, the Huntress or Destroyer. Goddess of nature, fertility, childbirth, wildwood, moon, forests, animals, mountains, woods, and women. Goddess of the hunt. In Roman art Diana usually appears as a huntress with bow and arrow, along with a hunting dog or a stag. Both a virgin goddess and an earth goddess, she was identified with the Greek Artemis. She is praised for her strength, athletic grace, beauty and her hunting skills. With two other deities she made up a trinity: Egeria the water nymph (her servant and assistant midwife), and Virbius (the woodland god).


Queen of the Gods. Jupiters wife and sister, sister to Neptune and Pluto, daughter of Saturn, mother of Juventas, Mars, and Vulcan. Protectress of the Roman state. She was the guardian of the Empire's finances and considered the Matron Goddess of all Rome. The Matronalia, her major festival is March 1-2. Her other festival, on July 7-8, was called Nonae Caprotinae ("The Nones of the Wild Fig"). The month of June was named after her.


Ruler of the Gods. He is the god of Sky, Lightning and Thunder. He is the son of Saturn and brother of Neptune, Pluto and Juno, who is also his wife. His attribute is the lightning bolt and his symbol the eagle, who is also his messenger. He was also considered the Patron god of Rome, and his temple was the official place of state business and sacrifices.


God of war, spring, growth in nature, agriculture, terror, anger, revenge, courage and fertility. Protector of cattle. The son of Jupiter and Juno, he was the god of war. Mars was regarded as the father of the Roman people because he was the father of Romulus, the legendary founder of Rome, and husband to Bellona. He was the most prominent of the military gods that were worshipped by the Roman legions. The martial Romans considered him second in importance only to Jupiter. His festivals were held in March (named for him) and October.


God of Trade, Profit, Merchants and Travellers. His main festival, the Mercuralia, was celebrated on May 15 and on this day the merchants sprinkled their heads and their merchandise with water from his well near the Porta Capena. The symbols of Mercury are the caduceus (a staff with two intertwined snakes) and a purse (a symbol of his connection with commerce).


Goddess of Wisdom, Learning, the Arts, Sciences, Medicine, Dyeing, Trade, and of War. Daughter of Jupiter, protectress of commerce, industry and education. Honored at the spring equinox with her main festival, March 19 - 23, called the Quinquatria. On June 13 the minor Quinquatrus was observed.


God of the Sea. Brother of Jupiter, Pluto and Juno. The God and patron of Horses and Horse Racing as Neptune Equester. Neptunalia was celebrated on July 23. The trident is Neptune's attribute.


Originally a Goddess of Gardens and Vinyards, Venus became the major deity of love and beauty after the influx of Greek deities. On August 18 the Vinalia Rustica was observed. A second festival, that of the Veneralia, was celebrated on April 1 in honor of Venus Verticordia, who later became the protector against vice. On April 23 a festival, the Vinalia Priora, celebrated the opening of one of her temples.


Goddess of the Fire (both sacred and domestic) and the Hearth. Daughter of Saturn and Ops. Her sacred animal was the ass. Patroness of bakers. Her chief festival was the Vestalia on June 7. One of the most worshipped of the Roman deities.


God of Fire, Blacksmiths and Craftsmanship. His forge is located beneath Mount Etna. It is here that he, together with his helpers, forges weapons for Gods and heroes. Closely associated with Bona Dea with whom he shared the Volcanalia, observed on August 23.

A List of the Minor Roman Gods and Goddesses

Roman Gods and Godesses Adopted From Other Cultures


Did you know...
The Romans had many gods and goddesses. Most of these were the same ones that the ancient Greeks worshipped, except that they had different names.

A list and description of the many different gods and goddesses that were worshipped by the Ancient Romans.

While the rise of Christianity to dominate western religion may very well have been inevitable, certain key moments along the way helped secure this position.

The head priest of the Roman state religion was the Pontifex Maximus. The main duty of the pontifices was to provide the pax deorum, or the 'peace with the gods'.

CLICK HERE TO READ MORE
The Dancing Lares and the Serpent in the Garden: Religion at the Roman Street Corner
by Harriet I. Flower

In this comprehensive and richly illustrated book, the first to focus on the lares, Harriet Flower offers a strikingly original account of these gods and a new way of understanding the lived experience of everyday Roman religion.

In this ambitious and authoritative book, Jörg Rüpke provides a comprehensive and strikingly original narrative history of ancient Roman and Mediterranean religion over more than a millennium?from the late Bronze Age through the Roman imperial period and up to late antiquity.

CLICK HERE TO READ MORE
Religion in the Roman Empire
by James B. Rives

This book provides an engaging, systematic introduction to religion in the Roman empire.

Roman Religion: A Sourcebook provides an introduction to the fundamentals of ancient Roman religious beliefs and rituals through a rich collection of ancient source readings.

This book, which includes a new preface by the author, offers an engrossing portrayal of the early years of the Christian movement from the perspective of the Romans.