A Simple Yet Powerful Economy

For all of the glory and grandeur of Ancient Rome, the Roman economy never developed into anything terribly complex compared to modern economies. Ancient Rome was an agrarian and slave based economy whose main concern was feeding the vast number of citizens and legionaries who populated the Mediterranean region. Agriculture and trade dominated Roman economic fortunes, only supplemented by small scale industrial production. 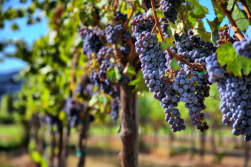 The staple crops of Roman farmers in Italy were various grains, olives, and grapes. Olive oil and wine, outside of direct food stuffs, were among the most important products in the ancient civilized world and led Italy's exports. Romans did use a limited form of two tier crop rotation, but crop production was largely low output and required a vast number of slaves to operate at any volume.

Farmers could donate surplus crops to the government in lieu of a monetary tax. This system allowed both Republican and Imperial rulers to gain popularity with the masses through free grain distribution and also help to feed the legions at no direct monetary cost. Unfortunately it also left farmers with little incentive to increase productivity or output, since more crop translated to more taxes (and more free grain distributions). Citizens grew dependent on these grain doles and the large volume of trade that ensued.

Ancient Rome was an agrarian and slave based economy whose main concern was feeding the vast number of citizens and legionaries who populated the Mediterranean region.

The Importance of Grain Facilitated Expansion and Conquest

The need to secure grain providing provinces was one of many important factors that would lead to the expansion and conquests of the Roman State.

Among these conquests were the provinces of Egypt, Sicily and Tunisia in North Africa. These areas were of vital importance in the processing and shipment of grain to Rome.

Grain was shipped directly to Ostia, the official port of Rome, and penalties for disruption of the most direct route included deportation or execution. Once delivered to Ostia the grain was weighed, checked for quality, and then sent up the Tiber River on barges to Rome, where it would be repacked for distribution throughout the Empire.

While the production and transportation of foods dominated the trading industry, there was also a vast exchange of other goods from all parts of Europe, Asia, and Africa.

The prosperity of the Empire and many of it citizens generated a need for luxurious and exotic imports. Silks from China and the Far East, cotton and spices from India, Ivory and wild animals from Africa, vast amounts of mined metals from Spain and Britain, fossilized amber gems from Germany and slaves from all over the world discovered that all roads did indeed "lead to Rome."

The importance of industry and manufacturing was comparatively light to that of agriculture. The growth and influence of the Empire can not be underestimated, however. The largest industry in ancient Rome was mining, which provided the stones for the enormous building projects and metals for tools and the weapons that conquered the western world. Greece and northern Italy provided marble for the buildings that awed the ancients and modern people alike. Large quantities of gold and silver were mined in Spain to mint coins and create jewelry, while mines in Britain produced iron, lead and tin for weapons. Cities and towns throughout the empire established small-scale manufacturing plants which turned out hand-made pottery, glassware, weapons, tools, jewelry and textiles.

Extensive trade routes were established on land and sea. The Roman roads are one lasting legacy of Roman domination and many are still in use today. While a benefit of a large network of roads was the transport of goods, their most significant purpose was the fast mobilization of the legions.

Following in the wake of marching soldiers, vast numbers of goods were carried along these roads. Transporting goods by land was slow and expensive, however, as large loads in wagons and carriages were pulled by lumbering oxen. Large, slow shipments were vulnerable to raids and adverse weather so faster horse drawn loads were used, but they could only deliver lighter cargos.

The largest industry in ancient Rome was mining, which provided the stones for the enormous building projects and metals for tools and the weapons that conquered the western world.

Caravans of camels or donkeys carried loaded baskets called panniers and some goods were hauled by slaves, providing cheap labor. Trade by land was only profitable if goods were going short distances or if the cargo was small, expensive luxury items.

Most large-volume, cumbersome goods, such as food, precious metals, stones and building supplies, were shipped by water. Numerous sea lanes provided cheap and easy access to all parts of the Mediterranean. The consolidation of the Roman navy under Augustus virtually wiped the threat of piracy out, but inclement weather, inaccurate charts and poor navigational equipment could still wreak havoc on a convoy. Still despite the dangers, there was no better way to move cargo than by ship.

Romans thrived off of imported goods, and importers were among the wealthiest citizens of the Empire. The trading of goods for goods barter system was alive and well in the ancient world, but the Romans also used one of the world's most developed coinage systems. Coins of brass, bronze, copper, silver and gold in the Imperial system were minted and circulated under strict rules for weights, sizes, value and metal composition. The popularity and value of Roman coins

became so great that they could be found as far east as India.

Roman coins were greatly detailed and of high artisanship, and often were used as tools by the Emperors to circulate various forms of news and propaganda to the people and the world. In fact, numismatics (the study of ancient coins), is among the greatest sources of historical facts, events and living conditions as it relates to the Romans. 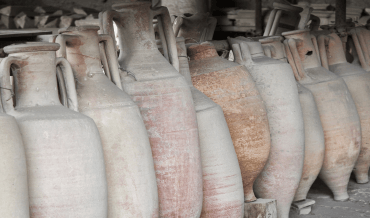 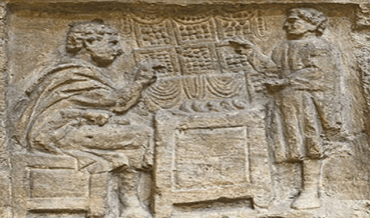 Just like today, taxes provided an essential source of revenue for the government.
CLICK HERE TO READ MORE 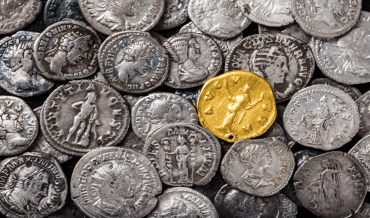 As Rome grew, and the need for a system other than barter, coins began to be used in lieu of the exchange of goods.
CLICK HERE TO READ MORE 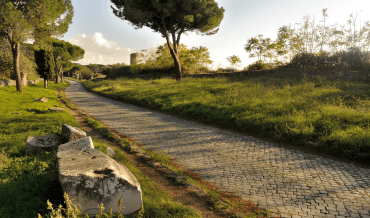 The Ancient Roman road network was essential for the movement of goods (and the military) around the Empire.
CLICK HERE TO READ MORE

Just like today, taxes provided an essential source of revenue for the government to fund its various projects and wars.

As Rome grew, and the need for a system other than barter became a necessity, coins began to be used.

The Ancient Roman road network was essential for the movement of goods and the military around the Empire.

The Roman Market Economy uses the tools of modern economics to show how trade, markets, and the Pax Romana were critical to ancient Rome's prosperity.

CLICK HERE TO READ MORE
Quantifying the Roman Economy
by A. Bowman & A. Wilson

This book focuses on the economic performance of the Roman empire, analysing the extent to which Roman political domination of the Mediterranean and north-west Europe created the conditions for the integration of agriculture, production, trade, and commerce across the regions of the empire.

Fully accessible to the non-specialist, the volume represents a major advance in our understanding of the economic expansion that made the civilisation of the classical Mediterranean world possible.

CLICK HERE TO READ MORE
The Ancient Economy
by M. I. Finley

To study the economies of the ancient world, one must begin by discarding many premises that seemed self-evident before Finley showed that they were useless or misleading. Available again, with a new foreword by Ian Morris, these sagacious, fertile, and occasionally combative essays are just as electrifying today as when Finley first wrote them.