What Did The Roman Senate Do? 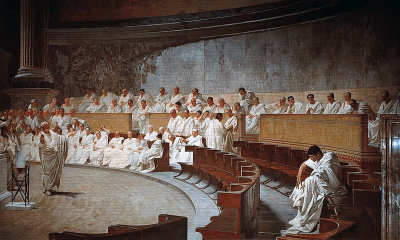 The Roman Senate (Senatus) from the latin Senex (for elder or council of elders) was a deliberative governing body. It is important to note the difference between deliberative and legislative, in that the Senate itself didn't propose legislation; though magistrates within the Senate, such as Consuls, did.

The body of the senate deliberated these proposals, and along with the later Tribunes of the Plebs, approved or vetoed the various laws. The Senate and the Roman People (SPQR, or Senatus Populusque Romanus), described the distinction in class between the Senate and common people. The "Roman People" consisted of all citizens who were not members of the Senate.

Domestic power was vested in the Roman People, through the Committee of the Hundreds (Comitia Centuriata), the Committee of the Tribal People (Comitia Populi Tributa), and the Council of the People (Concilium Plebis). Actual legislation was secured in the various assemblies. They acted on the recommendations of the Senate's deliberations and also elected the magistrates.

Despite its lack of actual law making power, the Senate held considerable authority in Roman politics. As the representative figurehead of Rome, it was the official body that sent and received ambassadors on behalf of the city, appointed officials to manage and govern provinces, declared war and negotiated peace, and appropriated funds for various projects such as public building construction. Appointments of military Legates, and the overall oversight of Roman religious practices remained in the control of the Senate as well.

It was also the Senate who held the authority to nominate a dictator (a single leader who acted with ultimate authority and without fear of reprisal) in a state of emergency, usually a military one. In the late Republic, and in attempts to stop the spiraling pattern of dictatorships, the Senate attempted to avoid the dictatorate by resorting to a senatus consultum de republica defendenda, or the senatus consultum ultimum. This was the declaration of martial law, and essentially empowered the Consuls with dictatorial power in defense of the Republic.


How Many Senators Were There?

The number of senators in Rome was initially a direct correlation to the number of tribes represented. In the earliest days of Rome under Romulus, when Rome consisted only of one tribe, the Ramnes, the senate consisted of one hundred members. Further incorporation of various tribes, such as the Tities and Luceres, increased accordingly the number of Senators to 300.

Proposals throughout the Republic by various magistrates such as Gracchus, Livius Drusus, Sulla and Marius altered the membership from between 300 and 600. At times, prominent equestrian plebes were added en masse, or even common soldiers and freedman, as when Julius Caesar increased the Senate roles to 900.

With the accession of Augustus, the permanent foundation for Senate numbers appears to have been fixed at 600, but this number also fluctuated throughout the empire at the whims of the emperors.


How Were Senators Chosen?

The initial 100 senators or advisory council, traditionally instituted by the mythical Romulus, were composed of the heads of leading families, the patricians (from the Latin Patres meaning fathers or forefathers). The later drafted plebeian senators were called Conscripti (conscripted men), as they had no choice but to take a Senatorial seat. The eventual nomenclature to describe Senators, Patres et Conscripti (Conscript Fathers), soon left out any distinction between Patrician and Plebeian and came to be an all encompassing term.

Members of the Senate were chosen from among eligible equites, and selected by Consuls, Tribunes and later by Censors. Alternatively, they were selected from those who were elected to previous magistracies, such as Quaestors. If not previously a member of the Senate, a magistrate ending his year of service in one of these offices would then be eligible for an immediate seat.

Not all Senators held equal status, however. Those selected by Censors or other magistrates to fill seats from among the equites had no right to vote or to speak on the Senate floor. Senators earned the proper dignity and nobility to vote and speak on the floor by virtue of holding various offices such as Consul, Praetor, Aedile, etc., Such dignified offices as the Pontifex Maximus (head of the Roman Religion), or the Flamen Dialis (chief priest of Jupiter) were categorized as non-voting and non-speaking, with the exception of various religious rituals.

There were also age requirements for admission into the senate. While no written record of the actual age exists for the early Republic, the Lex Annalis clearly indicates that a Quaestor is immediately eligible for inclusion at the end of his 1 year term of office. As questors had to be 31 at election, it stands to reason therefore, that 32 would be the minimum required age for selection for a Senate seat. Later, in the early Empire, Augustus fixed the age of entry at 25; an age which seems to have held up throughout the remainder of the Senate's history.


How Did the Roman Senate Function?

The two elected consuls alternated monthly as the primary director of the Senate and held the right to propose his own agenda. The Princeps Senatus, who was generally chosen from among ex-censors for a term of 5 years, held the prestigious position of leader of the house. He was in control of such things as opening and closing meetings, as well as setting meeting times and places, reading documents before the members, meeting with dignitaries and imposing order on other Senators, including the Consuls.

Among the senators with speaking rights, a strict order defining who could speak and when was established, with a patrician always preceding a plebeian of equal rank. The speaking order was similar to that of the seating arrangement, in which the princeps senatus held the first chair, followed by the consuls, censors, praetors, aediles, tribunes and finally, the quaestors. There were no limits to debating, and various methods of delay and subversion were employed. Among these, the practice of the filibuster, or speaking at incredible lengths to derail the opposition and delay voting, was a popular one, just as it can and has been in modern-day politics.

Voting in the Senate could be taken by voice or show of hands in unimportant matters, but important or formal motions were decided by a quorum, or an actual physical division of the house to either side of the floor. In these cases, even non-voting members were allowed to take places on either side of the issue, lending their support to a particular cause or motion, or to fulfill their client obligations.

Senators also carried certain privileges, and were subject to accompanying restrictions. All senators were entitled to wear a senatorial ring (originally made of iron, but later from gold) and a tunica clava, a white tunic with a broad purple stripe five inches wide (latus clavus) on the right shoulder. A senator pedarius (or a non-voting senator) wore a white toga virilis (also called a toga pura) without decoration. A senator who had held a curule magistracy, and thus the right to speak and vote, was entitled to wear the toga praetexta, a white toga with a broad purple border. Additionally all senators wore closed maroon leather shoes, but senators who had held curule magistracies also added a crescent-shaped buckle.

All Senators were forbidden to engage in mercantile activities outside of the ownership of land and natural resources. After the Punic Wars, a law was passed to prevent Senators from owning a ship of more than 300 amphorae in tonnage, to prevent shipping of goods for trading purposes. These laws, however, as cited from numerous sources, were frequently disregarded, as it was easy to mask such activities through various non-Senatorial clients.

Additionally, the Senate - both Patricians and Equestrian Plebes - were largely responsible for seating the 50 to 75 man criminal juries, as well as acting as the prosecution and defense attorneys in the various cases.

Did you know...
Cornelius Sulla was the first to use an army to usurp the power of the Senate.