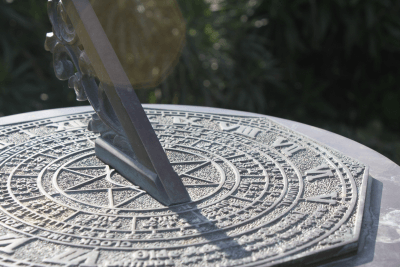 The original Roman calendar was assumedly borrowed, in part, from the culturally advanced Greeks.

Unfortunately, this early calendar was based on 10 months and only 304 days. The remaining 61 days that were later discovered to have been missing, were basically ignored and just occurred sometime during the winter season.

The 10 months, beginning in modern March, were named Martius, Aprilis, Maius, Junius, Quintilis, Sextilis, September, October, November, and December. The last six of these months were derivatives from the Latin words for five, six, seven, eight, nine, and ten, respectively. According to legend, Romulus, the fist King of Rome, is supposed to have introduced this calendar in the 8th century BC.

A following king, Numa Pompilius, is accredited with the addition of Januarius and Februarius, as winter months, to the calendar. Other reforms are often attributed to the Etruscan King Tarquinius Priscus, who ruled between 616 and 579 BC. These additions and the rest of the calendar were months, however, were still based on a lunar cycle, making the Roman year 355 days long. The ancient astronomers did have at least limited knowledge of the Solar year and periodic adjustments were made to bring the calendar in line with the appropriate season. Every other year a month called Mercedinus was inserted after February (March was the beginning of the year) adding an additional 23 or 24 days to the year. Mercedinus, which translates as payment for work was the time when property lessees paid rents due to their landlords.

Later in the Republic, Mercedinus gradually became known as Intercalans and could have variable lengths to right the seasons to the weather. It simply meant an inserted length of time into the calendar. It was the duty of the Pontifex Maximus to decide when and how long an Intercalans would be implemented.

The Romans referred to years in a couple of ways. Each year was recorded as a length of time from the traditional founding of Rome, in 753 BC. The Latin term Ab Urbe Condita, abbreviated as AUC, literally meaning from the founding of the city, was the correct terminology. Additionally, years could be referred to as the year in which a particular Consul was in office. As examples, the modern year 59 BC, would've been known as 694 AUC, or the year of the first consulship of Gaius Julius Caesar. Three days were structured with particular importance in the Roman calendar. The periods in between these intervals were of various lengths and days were counted backwards to the appropriate major day. For example, as the Calends was the first day of the month, March 23rd would be referred to as 9 days before the Calends of April.

Calends (or Kalends) - Occurred on the first day of every month and it had more days than the other two period combined. It spanned more than two lunar phases, starting from the day after a full moon and continuing through the moon's last quarter and waning period, then past the dark new moon until another lunar crescent was sighted. The day of Kalends began a new month. It was dedicated to the god Juno.

Ides - Occurred on the 15th day of every month which contained 31 days, and the 13th day of all other months. Ides was dedicated to Jupiter and was originally based on the date of a full moon. Because a full moon occurs halfway thru each lunar cycle, its day was called "Idus" from the Latin word meaning to divide. The next new moon was expected to develop between 15 to 17 days. Variations in this length of time, due to the lunar and solar cycles not corresponding exactly, led to Ides becoming mainly a day marking the middle of the month.

Nones - Always occured nine days before the Ides, on either the 5th or 7th of the month, depending on the length of the month. It was representative of the moon reaching its first quarter phase. As it was the duty of the Pontifex Maximus to assign these days, he would, after viewing the moon, assign how long it would take for the next phase to begin. If, on the day after the Kalends, he determined that it would be 5 days until the new crescent moon would appear, the day would then be referred to as the 5th day before Nones.

During the Late Republic, social disorder, political strife and an ongoing series of civil wars left the maintenance of the calendar in complete disarray. By the time Julius Caesar consolidated his power in 46 BC, the calendar months were off by as much as several months in comparison to the seasons.

Fortunately, while Caesar was in Alexandria, Egypt, he had access to the ancient world's foremost astronomy experts. The Egyptians were able to calculate the length of the actual solar year as 365.25 days and the winter solstice as December 24.

While the Eqyptians did the work, Caesar was the one who both authorized and implemented its use, thereby receiving the credit. Regardless, its accuracy at the time it was developed was remarkable, and only a millennium of a slight annual difference would eventually accumulate. The new Julian Calendar would follow the solar year, rather than lunar, with a total of 365 days vs. 355. The intercalary month was eliminated and the leap year, adding a day to February every 4th year, was adopted as well. In 46 BC, the calendar had to be set right before the new one could begin. A total of 3 intercalary months were inserted prior to the start of the new year. 46 BC, therefore, or 707 AUC to the Romans, was fifteen months and about 445 days long according to the calendar.

Caesar, in his divine ego, also renamed Quintilis, the fifth month, Julius (July), after himself. His heir and eventual first Emperor, Augustus, did the same to Sextilis, changing it to the name we now know as August. This basic transformation has essentially remained intact for 2 millennia and represents the foundation of the western calendar still in use today.

It's also the common opinion that Augustus moved a day from February to August in order to make his month the same number of days as Caesar's (July). However, there is little actual evidence to support this. We know that Caesar made every even month 30 days (except February) and this would seem to fit for August as the 8 month. No ancient sources seem to mention the movement of the day, even those who came after Augustus, who could've done so without fear of reprisal. While it seems to fit that Augustus added a day to the 30 day even month of August, there just isn't enough support this without a doubt.

Even the historian Suetonius, who assuredly printed any rumor or gossip about his subjects without concern over factual data, fails to mention the movement of the day:

"Inasmuch as the calendar, which had been set in order by the Deified Julius, had later been confused and disordered through negligence, he restored it to its former system [8 B.C.]; and in making this arrangement he called the month Sextilis by his own surname, rather than his birthmonth September, because in the former he had won his first consulship and his most brilliant victories."

Unfortunately, as suggested, a slight miscalculation on the part of the ancients left Renaissance scholars in a bit of difficulty. The actual year is 11 minutes and 14 seconds longer than what was calculated by Caesar and his Egyptian astronomers, so over the centuries, the difference grew to as much as 10 days. By 1582 AD, while the difference was still fairly negligible in comparison to seasonal circumstances, Pope Gregor XIII devised a new calendar, simply adjusting the old. The removal of three leap years each four centuries, basically, every year divisable by 100, but not 400, was removed from the calendar going forward.

The difference in future years was then taken care of, but Gregor also had to remove 10 days from the month of October, 1582 to bring things back in line. This reduced the error to almost nothing. The Gregorian Calendar, while more accurate then the Julian, took some time to catch on. Many European nations adopted it rather quickly in the 17th century, but Britain and her colonies, including the United States, waited until much later in the 18th century. Russia was the last of the western nations by doing so in the 20th century.

Overview of the Months of the Roman Year


Roman Days of the Week


Did you know...
The purpose of the calendar is to reckon past or future time, to show how many days until a certain event takes place, or how long since something important happened. Most of the oldest calendars were lunar calendars, based on the time interval from one new moon to the next. This is a so called lunation.

Did you know...
The first reform of the calendar was attributed to Numa Pompilius, the second of the seven traditional Kings of Rome. He is said to have reduced the 30-day months to 29 days and to have added January (29 days) and February (28 days) to the end of the calendar around 713 BC, and thus brought the length of the calendar year up to 355 days.

Did you know...
The Romans did not have weekdays in the same sense as our Monday, Tuesday, etc., however, they did have a defined markers within each month. Originally, the month and the markers were based on the moon.

Did you know...
In 44 BC Julius Caesar changed the name of the month Quintillis to Julius, after himself. The following year he decided (based on the advice of an astronomer) to use a purely solar calendar with 365 days. This calendar is known as the Julian calendar in his name.

Did you know...
The astronomer Sosigenes from Alexandria was given, by Julius Caesar, the task of designing an easy-to-use and exact calendar.

Did you know...
The soothsayer's warning to Julius Caesar, "Beware the Ides of March," has forever imbued that date with a sense of foreboding. But in Roman times the expression "Ides of March" did not necessarily evoke a dark mood-it was simply the standard way of saying "March 15."