UNRV.com is thrilled to present this map of the Roman Empire, which is now available to purchase as a large wall map. Exhaustively researched over the course of two years and subject to five months of design and historical scrutiny, this 'poster' is not simply an artistic work, but truly an educational resource in its own right.

Below is an example of how the map will look when framed and hung on a wall. Please note that the frame is not included. 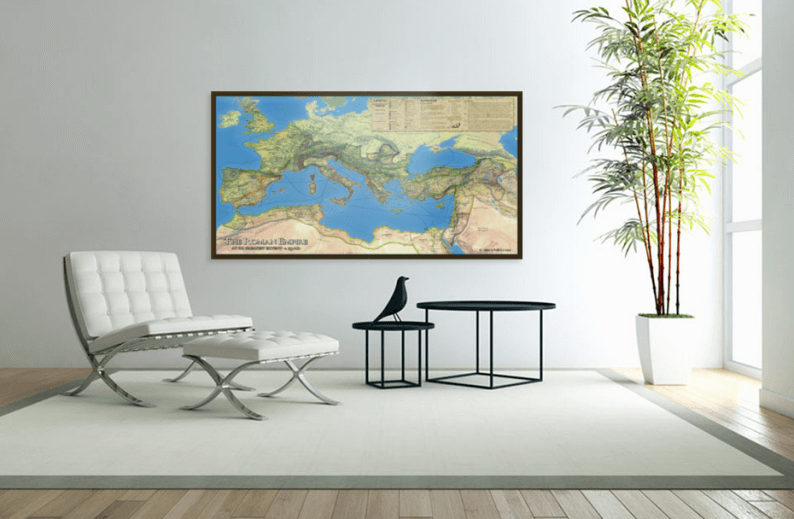 The map is unique wall decor that is perfect for the den, office or classroom and will delight history buffs; particularly those with a special interest in the Ancient Roman Empire. With the map features presented in the original Latin, it will also make an educational tool for the student, teacher or professor. No classroom focused on ancient history or classical studies should be without this spectacular reference and conversational piece.

High definition topographical relief and landcover data provided by the U.S. National Park Service has been used to create an exceptionally realistic foundation. The land within the borders of the Empire is slightly shaded to bring out the limits of Roman influence with the ease of a glance. From a distance, one sees the clear and stunning outline of the empire in Europe, Asia and Africa, but up close the detail and information provided is incredible. In addition, regional borders are shaded with various colors to provide five different eras of imperial expansion culminating in the reign of Trajan (and the empire's greatest extent) circa 117 AD.

This map is both a decoration and a tool, and it functions well as both. On the wall it makes a clear statement that the owner is serious about ancient history, and if the owner genuinely is serious about the topic, the map will see regular use.
- Philip Matyszak, Author

Some of the Highlighted Features:

Rome and its environs 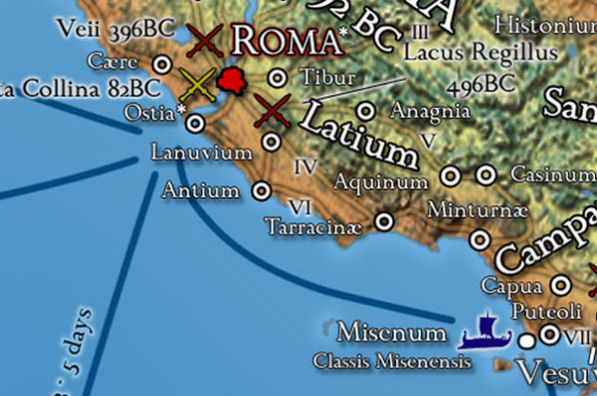 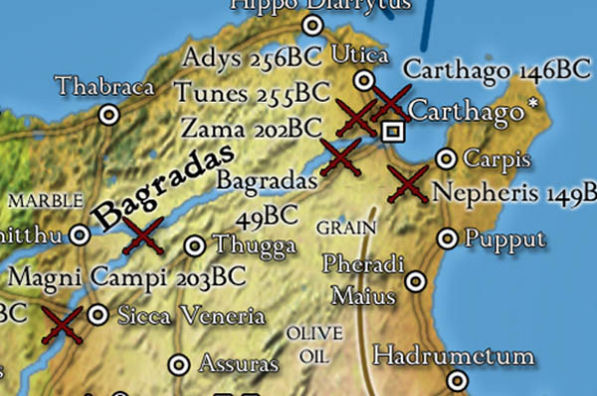 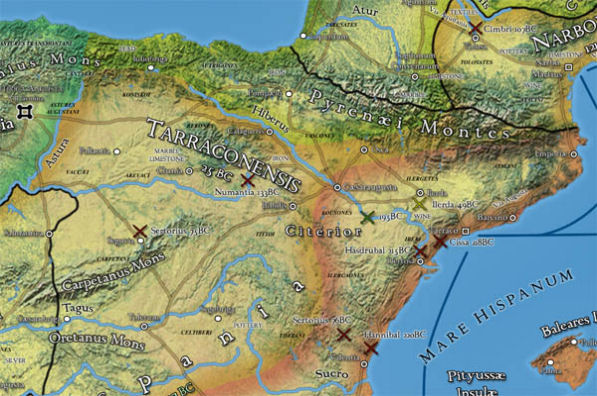 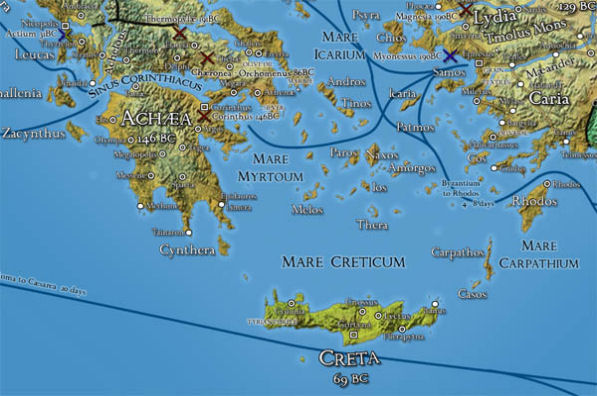 Alexandria, Aegyptus including the battles of Caesar and Octavian in 48 and 30 BC and the Jewish revolts in 66 and 115 AD 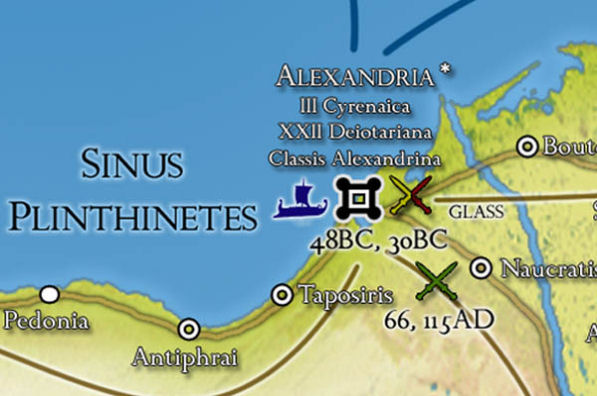 (in addition to compiled archaeological data regarding legionary locations)

The Roman Empire Map is priced at USD $59.99 which includes shipping costs (discounts are available when purchasing more than one map). Your map will be carefully packaged and shipped, and will reach you rolled and tubed in a transport sleeve.


These days walk-throughs of ancient Rome are ten a penny on the internet, where you can also find incredibly detailed maps of the ancient world (I particularly recommend those from J. Dent and Sons Atlas of the Ancient and Classical World which is now out of copyright in most jurisdictions.) So why does one need an old-fashioned wall map of the Roman empire, such as the one offered here by UNRV?

Well, the first reason is because this wall map makes the wall look good. The colours are a combination of pale greens, blue and light browns, a well-matched and appealing mix that is easy on the eye. As someone who has prepared numerous maps for different publications, I can attest that while the components of a good map appear to work together effortlessly, creating that appearance takes a lot of work. So this is the second factor in favour of this map ? it manages to be attractive visually while also being a highly functional tool.

Closer examination of the map reveals that there is a great deal of detail packed on to those shaded pastel colours. For a start, the designers have managed to combine provincial boundaries with a physical relief map. This is less easy to do than it might seem, because quite often Roman provincial boundaries were geographical features such as mountain ranges and rivers, so these features have to be shown with the borders overlaid.

The technique used here has been to give each province a slightly different pastel shade with the border a firm black line, while the relief features are picked out by the 'light source' of the map which - in keeping with modern computer tradition - appears to be coming from the top right. This works well with mountains, but less so with rivers. Even major waterways like the Rhine and Danube are hard to pick out at a glance.

Another advantage of the shading scheme is that the map's authors have turned northern Europe a lush verdant green while the deserts of the south and east look suitably sere and brown.

About ten percent of the map is taken up by the Legend and Appendix, written on an appropriately-themed background of aged vellum. The legend explains some of the many features of the map. For example, not only are the major roads and waterways listed, but also the usual travel times. Likewise, we not only have the location of all of Rome's major battles, but also the location of the major legionary forts (with the map making a careful distinction between forts and bases.) In fact one of the delights of this map is the careful scholarship which has evidently done into the preparation, which is a delight, but not a surprise. UNRV's members are not only enthusiasts but many are frighteningly well-informed and not shy about pointing out any errors they find.

Some details become evident when one sees the entire empire presented in this way. The green-tinted coast of Cyrenica on the African shore is serenely empty of all but a single road, and a few coastal towns. Britannia, on the other hand, is splattered with legionary bases and battlefields. However, even the map of Cyrenica tells us that it became a province in 96 BC, that a major battle was fought there two hundred years later, that the major tribe of the interior is the Marmaridae, and you really wouldn't want to live in Arimantas, deep in the Sahara. However, continuing to use Cyrenica as an example, a study of the Weigel maps from the University of Texas shows that the region called the Pentapolis (where the five major cities were) could usefully have been marked out, and the map does not show some major oases in the interior which might have made life in Arimantas more liveable.

To some extent this is nit-picking ? any map maker has to compromise between detail and usability. Furthermore, the main function of this map is not to be a detailed atlas for the hard-core historian but a quick at-a-glance guide of what was where. I find myself getting up once or twice a day to check details such as whether Edessa was west of Thessalonika (it is) and which province Petra was in (Arabia). I've also started anxiously scanning the map to see which set of ancient ruins are next in danger of being blown up by modern fanatics.

Overall then, this map is both a decoration and a tool, and it functions well as both. On the wall it makes a clear statement that the owner is serious about ancient history, and if the owner genuinely is serious about the topic, the map will see regular use.

Personally I opted to frame the map, but be aware that unless the map is going to get smeared otherwise, putting the it behind plastic or glass adds reflections and obscures the finer details.