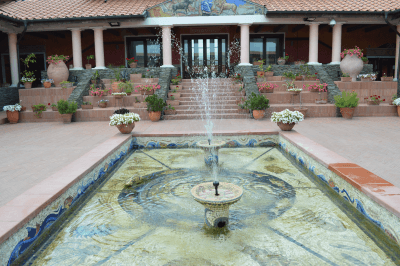 The private houses of the Romans were relatively modest and simple building prior to the conquest of the East, when vast wealth began to pour into the city. Many houses of immense size were then erected, adorned with columns, paintings, statues, and costly works of art. Some of these houses are said to have cost as much as two million denarii.

The principal parts of a Roman house were the Vestibulum, Ostium, Atrium, Alae, Tablinum, Fauces, and Peristylium. The Vestibulum (modern Vestibule) was a court surrounded by the house on three sides, and open on the fourth to the street. The Ostium corresponded in general to the modern front hallway. From it a door opened into the atrium, which was a large room with an opening in the centre of its roof, through which the rain-water was carried into a cistern placed in the floor under the opening. To the right and left of the atrium were side rooms called the alae (just like the Cavalry Alae units were used on the flanks), and the tablinum was a balcony attached to it. The passages from the atrium to the interior of the house were called fauces. The Peristylium, towards which these passages ran, was an open court surrounded by columns, decorated with flowers and shrubs. It was somewhat larger than the atrium.

The floors were covered with stone, marble, or mosaics. The walls were lined with marble slabs, or frescoed, while the ceilings were either bare, exposing the beams, or, in the finer houses, covered with ivory, gold, and frescoes.

The main rooms were lighted from above; the side rooms received their light from these, and not through windows looking into the street. The windows of rooms in upper stories were not supplied with glass until the time of the Empire. They were merely openings in the wall, covered with lattice-work. To heat a room, portable stoves were generally used, in which charcoal was burned. There were no chimneys, and the smoke passed out through the windows or the openings in the roofs. However, the wealthiest Romans used heated water supplies from natural springs or through the sewer system.

The rooms of the wealthy were furnished with great splendor. The walls were frescoed with scenes from Greek mythology, landscapes, etc. In the vestibules were fine sculptures, costly marble walls, and doors ornamented with gold, silver, and rare shells. There were expensive rugs from the East, and, in fact, everything that could be obtained likely to add to the attractiveness of the room.

Candles were used in early times, but later the wealthy used lamps, which were made of terra-cotta or bronze. They were mostly oval, flat on the top, often with figures in relief. In them were one or more round holes to admit the wick. They either rested on tables, or were suspended by chains from the ceiling.

The common classes lived in apartment like buildings called the insula. These buildings were situated to cover an entire city block, with residential homes in the interior and commercial shops, restaurants, markets or various organized clubs around the street sides.

Did you know...
Frescoes were a historical painting technique in which pigment was applied to wet plaster.