The Mythical Founders of Rome 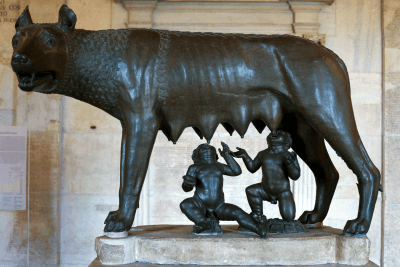 According to Roman mythology, the founders of Rome were Romulus and Remus. The twin-brothers were the supposed sons of the god Mars and the priestess Rhea Silvia.

The story begins with the deposition of Numitor (their grandfather and king of the ancient Italian city of Alba Longa), by his brother Amulius. Numitor's daughter, Rhea Silvia, was made a Vestal Virgin by Amulius - which meant that she was made a priestess of the goddess Vesta and therefore forbidden to marry. However, the god Mars came to her in her temple and with him she conceived her two sons, Romulus and Remus.

As soon as they were born, her husband abandoned them in a remote location. This practice was a form of quasi-infanticide tolerated in many ancient cultures, including the Roman and Greek, when children were unwanted.

They were unwanted because Amulius was fearing that the boys would grow up to overthrow him, so he had them placed in a trough and thrown into the River Tiber. At that time the river was flooded and when the waters fell, the trough still containing the two boys, came ashore. They were found by a she-wolf, who instead of killing them, looked after them and fed them with her milk. The she-wolf was helped by a woodpecker who brought them food as well. Interesting enough both these animals were sacred to Mars.

Romulus and Remus were then discovered by Faustulus, a shepherd, who brought the children to his home. Faustulus and his wife, Acca Larentia, raised the boys as their own. According to Livy, some said that Loba, wife of Faustulus had suckled them, not a female wolf. Indeed, her name meant wolf which was Lupus in Latin. Upon reaching adulthood, Romulus and Remus killed Amulius and reinstated Numitor, their grandfather, as King of Alba Longa, then they decided to found a town of their own.


The Founding of Rome

Romulus and Remus chose the place where the she-wolf had nursed them. Romulus began to build walls on the Palatine Hill, but Remus jeered at them because they were so low. He leaped over them to prove this, and Romulus in anger killed him. Romulus continued the building of the new city, naming it Roma (Rome) after his own name. It's first citizens were outlaws and fugitives, to whom Romulus gave the settlement on the Capitoline Hill.


The Rape of the Sabine Women

There were, however not enough wives for all these men, and so Romulus decided to steal women from the Sabines, an Italian tribe. He proclaimed a festival and invited many Sabines to it. While the attention of the Sabine men was elsewhere Romulus' men rushed in and carried off the women. This was the famous "Rape (carrying off) of the Sabine women", which later became a subject for painters. The Sabine men were furious and, led by their king Titus Tatius, declared war on Romulus. When the fighting had reached its peak, the Sabine women, who had grown fond of their Roman husbands, rushed between the ranks and begged both sides to make peace. So the battle was stopped, Romulus and Titus Tatius ruled together over the two peoples until Titus Tatius was killed in battle. For the rest of his life Romulus ruled alone, proving himself a great leader in peace and war. He did not die but disappeared one day in a violent storm. The Romans believing he had been taken up to heaven, worshiped him under the name of Quirinus. He was succeeded by Numa Pompilius.

It seems unlikely that any part of this legend is true. Almost certainly it is a copy of a Greek tale, invented to explain the name of Rome and certain customs. For instance, Roman brides were taken from their families on their wedding days with a pretense of force, and this probably accounts for the story of the Sabine women.

Did you know...
While the attention of the men was elsewhere Romulus' men rushed in and carried off the women. This was the famous "Rape (carrying off) of the Sabine women", which later became a subject for painters.