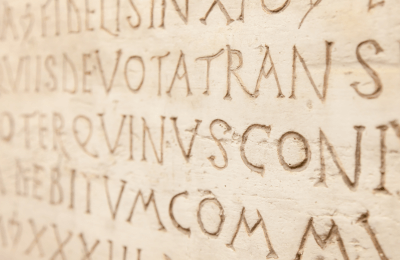 Latin was brought to Italy about 1000 BC by Indo-European immigrants from Northern Europe. It began, as all languages do, as an isolated local tongue of a small territory on the Tiber River called Latium. As the people in Latium developed into an organized community, the city of Rome was eventually founded in, according to legend, 753 BC.

In a little over a century, the Latin Romans would fall under the sway of Etruscan Kings. The evolution of Latin in its early development was therefore heavily influenced by these non-Indo-European Etruscans. Over time, it was also affected by the Celtic migrations and their dialects from Northern Italy and by the dominant regional culture of the Greeks.

Latin would quickly spread over a larger part of Italy, in direct correlation to Roman conquests. With the foundation of the Roman Empire, a large portion of the western world would come to speak various forms of Latin or have it intermingled with their own tongues. While classical Latin developed in the city of Rome and its environs, a spoken vernacular form of Latin was carried by the Legions throughout the Roman provinces. With this development, the use of Latin in these regions would supercede the pre-Roman dialects of Italy, Gaul and Spain. However, some expressions of the original languages remained intact and, once mixed with the spoken Latin, gave birth to new languages known as the Romance languages. Only the deeply rooted Greek language would resist Latin interjection and continue to be spoken in its original form.

Latin also survived the fall of the Roman Empire. As the centuries passed it continued to be an international language of the educated and social elite, accompanying the modified tongues of the common people. The sole language of the Catholic Church was Latin, and all scholarly, historical, or scientific work was written in it. The replacement of the Romans itself as an international authority, with that of the church, was a key factor in keeping the language alive and in practice. When the Middle Ages ended, end the west experienced a cultural Renaissance, interest in classical Latin as a means of artistic and literary expression grew. During and after this period of re-birth, forms of Latin were even transplanted to the Western Hemisphere. Today, the people of Mexico, Central America, and South America are called Latins or latinos.

The Latin language is the bedrock of the language of Western Civilization. The Romance Languages of Spain, France, Italy, Portugal, and Romania developed from a hybrid version of spoken Latin and native tongues. Each would also be influenced in turn by other tongues, such as Slavic, Norse and many Germanic dialects. Without Latin, very few of the tongues we speak today would be possible or recognizable in their current forms.

Latin today may be a dormant language but it remains an important piece of our linguistic puzzle. The use of Latin for names of places, anatomy, biology and others still dominates several scientific and medical fields. People all over the world are studying Latin with enthusiasm and energy. It, of course, is still alive and well within the Vatican and the Roman Catholic Church. It is gaining new popularity among modern Italians and Romans; and conventions of Latin speaking people are becoming a regular occurrence in Europe. Latin is anything but a dead language.

The beginnings of the Latin alphabet can be traced to inscriptions dating from the 6th century BC. It was adapted from the earlier Etruscan alphabet that had grown to prominence in the region by approximately the 7th century BC.

Additionally, the letters Y and Z were taken from the Greek alphabet as Latin was heavily influenced by its eastern culturally advanced neighbors. The modern English and many European languages still use the basic Latin alphabet, if not the actual words of the language.

Quite contrary to modern western languages, lower case letters did not exist in the Latin alphabet that forms the root of many of these modern tongues. The letters K, X, Y and Z were used only for writing words in Greek, except for Roman numerals. The letters J, U and W were much later additions well beyond the Roman influence at a time as the European languages evolved to include more sounds and words. J is a variant of I, and U is a variant of V (i.e. Latin IVLIVS CAESAR, English Julius Caesar). The W was introduced as a 'double-v' to identify the sound that developed later differentiating it from the v.

Did you know...
Unlike English, Latin is an inflective language, which means that the way the word is used in the sentence is known by its ending.

Did you know...
In the course of its history, the Latin alphabet was used for several new languages, and therefore over time, some new letters and diacritics were created.