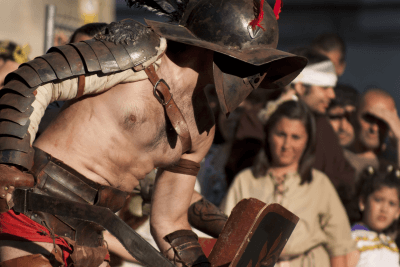 By the 1st century BC, the gladiatorial games were becoming more and more common as a form of entertainment (and mob distraction). As the political system of the Republic unraveled in the late to mid 1st century, hosting gladiator games was a near essential way for politicians to gain enough popularity for election.

With the mass influx of slaves from provincial conquests, the numbers of these combatants soared. It was typical for large schools to house many gladiators either in training or for permanent residence.

One such school in Capua became the scene of one of the most potent slave revolts in history.

Spartacus was one of the residents of Capua in 73 BC. He was originally speculated by the historian Appian to be a free born Thracian who had served as a Roman auxiliary. There are some who suggest he even may have been a citizen legionary but this seems unlikely. It may be that he was sold into slavery as punishment for desertion from his unit. Another possibility was that he was a native Thracian fighting against the Roman invaders and made a slave after having been defeated in battle. Regardless, according to Plutarch, he was purchased by a Lentulus Batiatus, the owner of a gladiatorial school. As a soldier, Spartacus would've possessed several traits making him desirable for gladiatorial combat.

Despite the popular conceptions of Spartacus as some sort of anti slavery hero, the reasons for the revolt of 73 BC are unclear. All that is known is that he, a Gallic and Germanic slave, Crixus and Oenomaus, led a revolt of the entire school. 74 gladiators seized kitchen knives and tools and broke free, killing the guards to win their freedom and gathering weapons and armor from the school stores. They set out immediately looting whatever they could from the local countryside and their reputation spread quickly. Farm and heavy labor slaves from all over the region abandoned their own masters and joined the rebel band. Within a short time, Spartacus' army of slaves seized Mt. Vesuvius and their numbers swelled into the tens of thousands.

The rebels plundered the surrounding areas and the spoils were equally divided among the participants. Encouraged by this early success, more slaves, freedmen and the disenfranchised joined the ranks. Rome responded slowly and inadequately, by sending a small and lightly trained force to deal with the gladiator problem. Two praetors, Varinius Glaber and Publius Valerius hastily recruited small units from local conscripts and didn't bother with proper training or equipment. To the Romans, Spartacus and his rebels were nothing more than an armed mob that could be easily put down by any show of force. No real concern was taken over their presence on Vesuvius.

When Glaber and Valerius approached, Spartacus duped the Romans and showed excellent military strategy. The Romans thought the rebels were trapped and were willing to hold them there without forcing the issue. Spartacus and his men scaled down the opposite side of the mountain, swept around and crushed the Roman Praetorian forces with ease. With the victory, hope for freedom and desire for plunder spread all over Italy. People by the thousands flocked once more to Spartacus. By the time of their next encounter with Roman troops, he had over 70,000 under his command.

Spartacus apparently wanted to lead his men across the Alps and out of Italy to avoid future confrontation. His subordinate, Crixus, encouraged by their victories, wished to stay and continue raiding, and the forces split into separate commands. Spartacus would spend the winter in Thurii, preparing weapons and armor, and gathering supplies for the coming Roman advances. The Senate wisely realized that this rebellion was not just a mere collection of fugitive slaves, but a fairly cohesive unit, inspired by freedom and the chance for plunder. In the coming year of 72 BC, the senate recognized Spartacus' rebellion as the 'Third Servile War' and prepared Consular armies to end it.


The Defeat of Spartacus

With M. Licinius Crassus in command, the tide was about to turn in the Romans favor. Initially, an over eager subordinate of Crassus led an attack on Spartacus that failed miserably.

In this defeat several Romans fled the battle in the face of the gladiator army. In order to put an end to the terrible performance of the legions against Spartacus, Crassus ordered the seldom used penalty of decimation as punishment.

In decimation, one of every ten men is beaten to death by their own fellow legionaries. While ancient reports are conflicting, at least one full cohort was subjected to decimation, or possibly his entire force. Whether those put to death numbered around 50 men or 4,000 is in dispute, but there was no question among legionaries that Crassus was not a man to accept defeat with grace.

Crassus then moved his entire body against a detached segment of Spartacus' forces. With a full compliment of legionaries, Crassus wiped out 10,000 of the rebel slaves and moved against the main enemy body. Spartacus fled to Rhegium, across the straits from Sicily, with the hope of securing passage to the island, but was never able to secure passage with Cilician pirates.

Crassus pursued and built an extensive length of earthworks across the entire toe of Italy, trying to hem Spartacus in. At first Crassus was successful in trapping the slave army in, but the Senate viewed this as a demoralizing siege against an inferior foe. The great general Pompey was just returning from Spain, and they offered him an additional command to put an end to Spartacus once and for all.

Crassus was eager to achieve the victory himself and avoid sharing anything with his successful rival. He stepped up the pressure on Spartacus until he finally had little choice but to attempt a breakout. Unable to secure the passage to Sicily that he coveted, a breakout against the siege was ordered. While they did manage to escape, Spartacus lost a tenth of his army, or nearly 12,000 men. Free from Crassus' siege, Spartacus moved towards Brundisium, in the heel of Italy, where he still hoped to secure escape by sea.

The Romans were closing in, however, and an escape to Brundisium would never happen. Marcus Licinius Lucullus, fresh from a victory over Mithridates in the east, landed there with a full compliment of legionaries. Spartacus had little choice but to face his pursuers. Facing a full Roman army in open battle, especially one under adequate command, was something Spartacus tried to avoid, but in 71 BC, the slave army and the Romans met near Brundisium.

In the battle the inspired Romans dominated the slaves, and they were cut down in huge numbers. By the end, Spartacus himself was wounded and likely killed (his body was never found). Crassus swept survivors and stragglers out of the surrounding countryside by the thousands, and prepared a horrific, if not intimidating punishment. Up to 6,000 rebellious slaves were spaced out along the Appian Way, from Rome to Capua. Here they were crucified and left to rot as a reminder to all future potentials rebellions.

Pompey meanwhile had moved into Italy with his legions from Hispania. He swept out any remaining resistance and claimed final victory in the war. Pompey enjoyed a triumph for his 'victory' in Hispania, while Crassus was given the lesser honor of an ovation for his victory over mere slaves. The incident was an additional thorn in the side of a growing rivalry between Crassus and Pompey.

As the rivals stood on Rome's door step with full armies, both were elected Consul for 70 BC, despite Pompey's youth and lack of previous offices. Despite their rivalry, both men seemingly worked well enough together to repeal many of Sulla's unpopular laws. Pompey would soon be commissioned for further exploits in the east while Crassus would remain in Rome to continue amassing his fortune and influencing the politics of the 60s BC.

Did you know...
Capua's foundation is attributed - according to Cato the Elder - to the Etruscans, and the date given as about 260 years before it was "taken" by Rome.