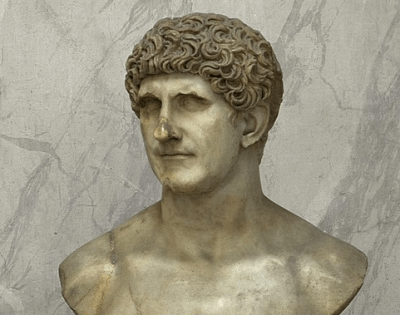 After the death of Caesar, one man in particular stood in the best position to sieze control of unstable Rome. Antony proved a vital supporter in Caesar's rise to power and would establish himself as one of the leading men of the later Republic. Antony, however, despite being a brilliant general, lacked the necessary political tools hold onto his precarious position.

Antony was born in Rome around 83 BC and was of a prominent family of some fame. His grandfather of the same name was a supporter of Sulla and was executed by Marius before Antony's birth; and his father, known for his campaigns against the eastern pirates died when Antony was quite young. Through his mother, Julia Caesaris, Antony was distantly related to Julius Caesar; and this carried considerable weight in his early career. Antony's mother remarried Publius Cornelius Lentulus, yet he was executed by Cicero in 63 BC as a result of the Cataline Conspiracy. This likely would be a key event marking Antony's personal enmity with Cicero in later years.

In his youth, Antony was known to keep dubious company, revelling in numerous affairs and general scandalous behaviour. With his friends, Publius Clodius Pulcher (the later leader of one of many factions within the Roman mob, and others such as Curio, Antony was a general carouser and gambler and was rumored to be indebted to the sum of 250 talents (several million dollars today). Prospects for the young man didn't seem to be outstanding, but his life took a decided turn for the better when he left Rome to study rhetoric in Greece. Though, his political education or abilities would never rival other great contemporaies such as Caesar, Cicero or Octavian, Antony seems to have garnered at least some natural oration ability. While his strength didn't necessarily rest in the political arena, military ability would be his eventual claim to fame.

While in Greece, Antony joined the cavalry under Aulus Gabinius and campaigned in Syria as well as other eastern borders of the empire. During the campaign, he showed a fine aptitude for command, distinguishing himself with both courage and leadership. He eventually ended his tour in Alexandria Egypt, where he helped re-install the exiled King Ptolemy Auletes. Though inconsequential at the time, its quite possible that Antony first crossed paths with his future lover; the eventual queen of Egypt, 14 year old Cleopatra VII.

In 54 BC, Julius Caesar called on the promising young commander to join his staff in Gaul. Though half-way through the war, Antonius' arrival was welcome indeed. As the hardest fighting was yet to come, Antony would prove a vital component in Caesar's eventual victory. Along with Labienus, Antony would become Caesar's most trusted and able subordinate. Unfortunatly, however, Antony's brutish and overbearing personality created problems that would plague Antony throughout his life. Though Caesar supported Antony for Quaestor in 52 BC, and continued to keep him on his staff, there were rifts that certainly must have soured Caesar's opinion.

In 50 BC, as civil war approached, Antony was elected as the fiery tribune that was a faithful and forceful supporter of Caesar's causes. It was his proposal (that both Caesar and Pompey should jointly lay down their commands) that could've prevented the war. Overwhelming senatorial objection to anything that might favor Caesar unravelled Antony's plans in favor of violent mob tactics. These tactics eventually earned Antony's expulsion from the office of tribune and gave Caesar the excuse he needed to cross the Rubicon. Supposedly defending the sacred rights of the tribune of the people, Caesar marched on Rome in 49 BC, with Antony at his side.

When Caesar marched for Spain, Antony was left in nominal command of Italy, but began to prove his ineffectiveness as a politician. Plutarch paints Anotny into a portrait of a tyrant with little care for Roman law or honor. Nevertheless, Antony's military skill kept him close to Caesar at least while Republican resistance was at its height. When Caesar crossed from Italy into Greece to attack the armies of Pompey, it was Antony who forced desperately needed supplies and reinforcements across the Republican controlled Adriatic. At Pharsalus, where Caesar defeated Pompey and essentially won the supreme leadership of Rome, Antony commanded the left wing of Caesar's army.

After Pharsalus, Caesar, now the dictator, continued on to Egypt and Africa, leaving Antony as his Master of Horse in command of Rome. Here it seems Antony's behavior finally alienated himself from Caesar. Antony let the economic and social order within Rome begin to crumble and turned to violence as a solution. Hundreds of citizens were killed in Antony's attempts to maintain order with obvious disapproval from Caesar. By the time Caesar returned victorious from Africa, Antony was replaced by Lepidus, and Antony fell out of Caesar's inner circle for nearly 2 years. Eventually Antony re-established importance within Caesar's faction, however, and played a pivotal role. In 44 BC, Antony joined Caesar as Consul and it was Antony who offered Caesar a diadem (crown) at the Lupercalia festival of that year. He continued to support Caesar's agenda and certainly was intrumental in forcing through many honors for the great conqueror.

After the assassination of Caesar on March 15, 44 BC, Antony was apparantly surprised to find that he wasn't a target. Though some speculate that he may have been at least distantly involved in the plot, his behaviour after the murder suggests otherwise. After reconciling, at least in theory, with Caesar's assassins, and perhaps fearing the loss of power, Antony used Caesar's funeral oration as the catalyst that would once more plunge Rome into civil war. At this point, he used brute force and Caesar's massive public popularity to position himself at the top of the Roman political ladder. By late in 44 BC, Antony pushed through several laws, scattering the assassins throughout the provinces, and used his command of Caesar's fomer legions to maintain control. Antony procured the Gallic provinces for himself, and planned to take his army against Decimus Brutus, one of Caesar's assassins, who was assigned as governor there previously.

Before Antony could begin his quest for ultimate power, however, there was a new man on the seen. Gaius Julius Caesar Octavianus, Caesar's heir, had begun to challenge the authority of both Antony and the assassins. And sandwiched between them all was the great orator, Marcus Tullius Cicero.

Mark Antony's final years are entwined with the coming to power of Julius Caesar's adopted son and heir Octavian (later becoming better known as the emperor Augustus). This period is covered in great detail on the main page for Octavian/Augustus, which can be viewed by clicking here.

Did you know...
Marcus Tullius Cicero was born in 106 BC, hailing from a local equestrian family in Arpinum.