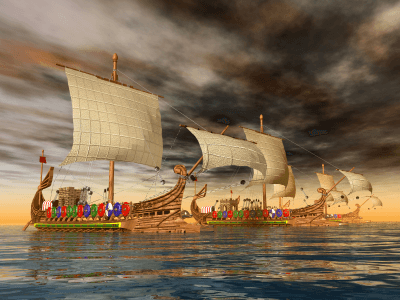 Prior to the Punic wars the Roman classis or fleet was limited to minor coastal operations and support for trade. The Romans concentrated on land based operations until this period in order to conquer and consolidate the Italian peninsula.

The wars with Carthage forced the Romans to adapt to naval operations in order to compete and defend. During the First Punic War a large fleet was built allegedly using a stranded Phoenician vessel as a prototype. The Romans lacked the skill of other maritime powers such as the Greeks and Carthaginians and had to resort to technology for advantages.

The traditional naval tactic of ramming wasn't abandoned, but the Roman ships were fitted with a corvus to accommodate their strengths in land combat. This movable boarding bridge enabled the Romans to transform naval combat from ramming and sinking to boarding with marines, capturing and plundering. In its initial stages this new combat style enabled the Romans to win some overwhelming successes against the Carthaginian fleet, but the added weight of the corvus made their vessels less maneuverable and seaworthy resulting in heavy losses with violent weather conditions.

Victory bred confidence and led to the eventual invasion of North Africa. Their newly founded sea prowess enables the Roman legions to land on the coast of North Africa and bring the war out of Italy and into the laps of the Carthaginians. Their navy became so successful in fact, that Hannibal, in the Second Punic War, abandoned the once formidable Carthaginian fleet to focus on land operations. With the final destruction of Carthage, and the end of the Third Punic War in 146 BC, Rome was the master of sea power in the Mediterranean.

However, the conquest of Carthage also eliminated the threat of maritime warfare as their were no longer any sea powers left to challenge Roman supremacy. As a result, the navy slipped into the logistical role of support to the legions and providing escort for trade vessels and grain shipments, with the adverse affect of drastically increasing piracy.

The only significant naval occurrences, aside from Caesar's crossing to Britannia, for the remainder of the Republic came during the Civil Wars that would end the current system. The battle of Actium, between Octavian's Legate Marcus Vipsanius Agrippa and the combined forces of Marcus Antonius and Cleopatra, was the last major naval battle in the Mediterranean until the Middle Ages.

Victory for Octavian ensured the collapse of the Republic and his confirmation as Augustus of the Roman Empire. With a fleet already raised to be for use against other Romans, Augustus virtually wiped piracy off the face of the Mediterranean, but this time, the fleet was more moderately maintained to protect Rome's trade.

The imperial navy after Augustus, aside from the occasional conflicts in civil wars, once again was primarily charged with the protection of shipping and deterring piracy. Rome maintained two large fleets, the Classis Praetoria Misenensis and Classis Praetoria Ravennatis based in the Mediterranean with smaller squadrons operating on the North Sea, Black Sea and along the major rivers running throughout the provinces. Misenum, built by Agrippa in 31 BC, was the main naval base of the Mediterranean, joined by Ravenna, Aleria on Corsica and other temporary ports.

The military situations on the Rhine and the Danube necessitated the construction of several dedicated fleet installations for the provincial fleets, classis Germanica, Pannonia and Moesica, but most were attached to the existing forts of Provincial Legions. In the English Channel and the North Sea (Oceanus Britannicus and Oceanus Germanicus), the Classis Britannica was stationed at Portus Itius (Boulogne) in Gaul and later also used the Saxon Shore forts of Britannia as bases.

As Roman power waned in the 4th and 5th centuries AD, so went the Roman navy. In 429 AD, the Vandals embarked on ships from southern Gaul and landed in North Africa, where they established their own kingdom.

Within a couple of decades, the Roman Empire consisted of little more than the city of Rome itself and its original territories in Latium and Central Italy. The Vandals powerful navy would aid the ushering in of the western empires fall when their pirate king Gaiseric not only eliminated Roman shipping on the Mediterranean, but also invaded Rome itself.

By the mid 5th century, the Vandals were the masters of the sea, and by 476 AD, Rome had fallen completely from power in Western Europe.

Did you know...
Roman ships were built by copying the example of captured Carthaginian vessels, combined with the expertise supplied by the Greek cities of southern Italy.