The Government of Ancient Rome 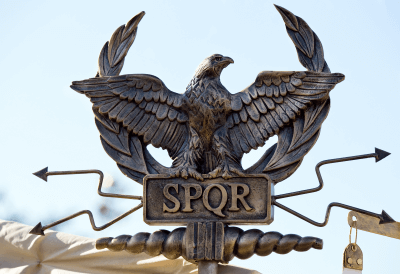 The Roman government, in its entire history from founding to fall, was a strange mix of democracy and dictatorship, quite often with the two overlapping at the same time.

At the creation of the republic, supreme power probably resided with a popular assembly, but early on the Senate became very influential, and the traditional formula, which survived for centuries, was S.P.Q.R. - Senatus Populusque Romanus - the Roman Senate and People acting together.

Since the Ancient Romans did not want one man to make all of the laws, they decided to balance the power of the government between three branches, there was first the executive branch, then the legislative branch, and finally the judicial branch.


Monarchy – The Seven Kings of Rome

In the early days of the fledgling settlement, Rome was governed by kings. Similar in many ways to the emperors that came later, these individual men had complete authority over all aspects of the lives of their subjects. A challenge to the king's authority would almost certainly lead to severe punishment, typically death.

As kings and rulers of other countries and civilizations throughout history have found (often paying the price with their life), such totalitarian rule can only last so long. The end of the road came with Rome's seventh king, Tarquinius Superbus (Tarquin the Proud) who ruled from 534-510 BC. He repealed several earlier constitutional reforms and used violence and murder to hold on to power. His tyrannical rule was despised by the Romans and the final straw was the rape of Lucretia, a patrician Roman, at the hands of Tarquinius' son Sextius. The Tarquins and the monarchy were cast out of Rome in 510 BC in a revolt led by Lucius Junius Brutus and Lucius Tarquinius Collatinus, who would become the first two consuls of a new form of government – the Roman republic.

FIND OUT MORE ABOUT THE KINGS OF ROME

The Roman Senate is often viewed as the seat of Roman power, where all the major decisions affecting the governing of the empire were made.

The reality is that the Senate was primarily an advisory body which, despite the wealth and prestige of those who sat in its hallowed chamber, actually had surprisingly little power. Of course, this is true of the Imperial Period, during which time the Emperor reigned supreme, but was actually rather surprisingly the case during the period of the Republic.

Although members of the Senate deliberated and voted on topics, actual legislation was secured in the various assemblies. These assemblies acted on the recommendations of the Senate's deliberations, and also elected the magistrates.

FIND OUT MORE ABOUT THE ROMAN SENATE

The decline and end of the Republican period ushered in the beginning of the Imperial period, in which the Roman empire was ruled by just one man – the emperor. Whilst political offices and bodies such as the Senate still continued, they become much more advisory in the role, at least for major decisions that is. They still played a significant part in the actual administration and functioning of the Roman empire; it was just that the emperor always had the final say.

FIND OUT MORE ABOUT ROMAN EMPERORS

Early Roman law was drawn from custom and statutes, but later - during the Imperial Period - the emperors asserted their authority as the ultimate source of law. However, the emperor certainly didn't have the time to judge every case in the empire, which meant that a comprehensive judicial system was required.

Many features of Roman law provided the basis for areas of modern laws, which is why Latin terms continue to be used in legal documents even today.

FIND OUT MORE ABOUT ROMAN LAWS

In the early days of the Roman Republic, the law was unwritten and tended to be implemented arbitrarily; interpreted up to that point by the higher status priests and magistrates, who would in most cases already have a biased opinion against the lower classes. By around 450 BC, tensions between wealthy patricians and poorer plebeians, who often felt aggrieved at the perceived unfairness of the legal system, were running high, and led to the creation of the Twelve Tables.

Inscribed on large bronze tablets and prominently displayed in the Forum, the Law of the Twelve Tables comprised 12 tables which stated the rights and duties of a Roman citizen, now for the first time in written format that anybody could view.

By producing a written set of laws that could be applied uniformly to all (at least in theory), the Twelve Tables calmed tensions and formed the basis for Roman Law for much of the next 1,000 years. Covering issues such as trials, rights and possessions, the Twelve Tables - at least in their concept of having written laws that could be applied uniformly – provided much basis for modern laws that we still live by today.

THE ROMAN TWELVE TABLES OF LAW

Consuls were the chief civil and military magistrates, elected through the assemblies by popular vote. Two annually elected consuls convened the senate and the curiate and centuriate assemblies. At the end of their annual term of service, Consuls would take the title Proconsul and generally serve as provincial governors.

During the Republican period, the two consuls were the two most powerful men in the entire Roman empire.

Each was allowed to veto the other's decision. This deliberately restricted the power held by a single man, as the Romans were highly fearful of going back to a monarchy with an all-powerful king (although this is slightly ironic as they would later be ruled by an emperor). The downside was that with an equal share, decisions could continually be blocked and little progress or change made. It also meant that consuls frequently disagreed with each other, which sometimes resulted in open hostility, and was far from conducive to a smooth-functioning empire.

FIND OUT MORE ABOUT ROMAN CONSULS

The Roman Empire was made up of several geographic territories called provinces. Each province fell under the control of a provincial governor, who were tasked with the administration and rule of that particular territory. There were 3 types of provinces and several classifications of governor. In 180 AD, provincial governors were still mainly drawn from the Senate.

FIND OUT MORE ABOUT PROVINCIAL GOVERNMENT

In 330 AD, the Roman Emperor Constantine moved the seat of the empire to Constantinople. The Roman Empire, now permanently split into East and West, was never to be the same again. In the East, what historians now refer to as the Byzantine Empire was the continuation of an empire that comprised Rome's eastern territories. The Byzantine Empire would continue for another 1,000 years or so, until it finally fell to the Ottoman Empire in 1453.

Please click on the link below to see the list of Byzantine emperors, beginning with Theodosius I (the Great) in 379 AD and ending with Constantine XI Palaeologus Dragatses in 1453.