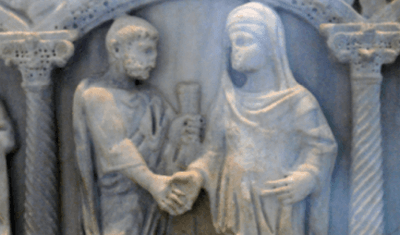 Prior to 445 BC, intermarriage (connubium) between patricians and plebeians was forbidden. After that the children of such marriages took the social rank of the father, be it patrician or plebeian, regardless of the mother's status.

After both families had agreed to a marriage, and the consent of the parents or persons in authority was given, the marriage contract was drawn up and signed by both parties. Once settled, the wedding day was then arranged, with important care to note that it could not fall upon the Kalends, Nones, or Ides of any month, or on any day in May or February (Related Page: The Roman Calendar).

The bride was dressed in a long white robe, with a bridal veil, and shoes of a bright yellow color. She was escorted in the evening to her future husband's home by three boys, one of whom carried a torch, the other two supporting her by the arm. They were accompanied by friends of both parties. The groom received the bride at the door, which she entered with distaff and spindle in hand. The keys of the house were then delivered to her. The day ended with a feast given by the husband, after which the bride was conducted to the bridal couch, in the atrium, which was adorned with flowers. On the following day another feast was given by the husband, and the wife performed certain religious rites.

The position of the Roman woman after marriage was very different from that of the Greeks. She presided over the whole household, educated her children, watched over and preserved the honor of the house, and shared the honors and respect shown to her husband. While few women were able to hold positions of power within the political or social system, many did run the household and private lives of their husbands with complete authority.

The Roman wedding is the basis for many modern western marriage customs. While there are some differences (especially regarding ages and choice of spouse), the similarities that have survived are quite remarkable. The following is a list of some basic wedding customs in ancient Rome:

Did you know...
Not only were there laws for marriages between citizen classes, but for others within Roman influence as well. There was also a marital arrangement for slaves (contuberium) and between freedmen and slaves (concubinatus).