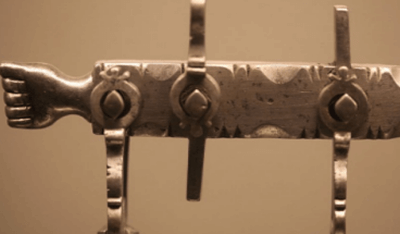 Many units of measurements in the modern western world have a direct relationship dating back to the Romans.

The modern mile, pound (lb for libra) and ounce (uncia) are all directly traceable. Some other similarities, such as the width of rail road rails, is said to correspond directly to groove marks left in Roman roads, but this theory is widely debated.

The following charts list the basic units of measurements used by the Romans. It is interesting to see how the American and old British systems, as tedious as it can be vs. the Metric, is so closely related.

Did you know...
Aediles were responsible for the supervision of water supplies and administration of public market and weights and measures.

Did you know...
The Groma (resembling a surveyor's cross) was the favored aligning instrument of the Romans.

Did you know...
The Congius volume measurement was also used in England, as appears by a charter of Edmund I in 946 AD.