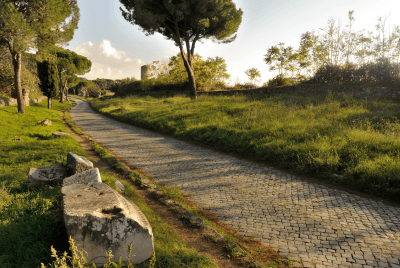 The engineers of ancient Rome built an unparalleled network of roads in the ancient world. Approximately 50,000 miles (80,000 km) of roads spanned the Roman Empire, spreading its legions, culture and immense influence throughout the known world.

The old saying "all roads lead to Rome", simply couldn't have been truer. Rome was the hub of commerce, trade, politics, culture and military might in the Mediterranean, and the grand achievement of her road network all led directly to the city and back out to her many territories and provinces.

Despite the grand spectacle that the road network really was, the original functionality of Roman roads was mainly designed for military exploitation. Starting with local roads, Rome was connected first to Latium, Ostia and surrounding areas. By the mid 4th century BC, as they pushed south into Samnite territories and Campania, longer highways were developed to give the legion an advantage over Rome's adversaries. The Via Appia, built between was the first, and most famous, of these. Begun in 312 BC by Appius Claudius Caecus, it ran southwest out of Rome, to Capua, then to Tarentum and later was pushed across to Brundusium (Brindisi) on the Adriatic eventually stretching all the way to the Straits of Messina.

Like most major Roman fortifications and public works, Roman roads were primarily built by the legions themselves, as they stretched the frontiers. Engineers were regular members of the Roman army and their expertise in roads, forts and bridge building was an invaluable asset unmatched by any other culture for two millenia. Estimating the cost of road building varies dramatically depending on the era and terrain, but there is no question regarding the cost effectiveness. As the empire expanded the cost responsibility for building and maintaining the roads were borne by local populations and tribes rather than by the Roman treasury itself.

As Roman generals marched with their legions, they were expected to provide road construction from their own resources. However, with complete authority in any given jurisdiction, those resources turned out to be mostly collected from locals, in money, raw materials and additional labor. Essentially, for seven centuries, Roman road building continued and was well maintained, until economic decline and external pressure began to give way. By the fall of the west in 476 AD, the condition of the roads paralleled the circumstances of the empire, and many roads would fall into disuse, disrepair and ruin throughout the medieval age.

Outside of the speed and accessibility provided to the Roman legions, the roads also provided an opportunity for trade, travel and communication unknown to the rest of the world. While travel of any considerable length was generally limited to the wealthy, theoretically one could travel from Spain to a Greek province without ever stepping off a road. While having obvious advantages for trade, once again, the roads were never a primary source of commerce. Most trade and transportation occurring on roads was limited to short routes, as sea traffic was by far the more attractive alternative. Road routes allowed the convenience of moving goods from the source, directly to a nearby port, or legionary supplies by sea could be moved to their final distance by road. The heaviest traveled roads were those connecting inland towns to nearby ports in the provinces and from ports, such as Ostia, to Rome in Italy.

A sort of ancient pony express was also developed along with a vast network of postal way stations along the road routes. Both horse driven carts and ridden horses were used for fast delivery of correspondence to distant places. For the first time in history it was possible to receive a letter in Rome, from as far away as northern Gaul, in as little as a few days. While military couriers were a considerably more common occurrence, dispatching letters between commanders, the Senate, the Emperor or various installations, the civilian mail service was a booming business as well.

Standard Roman roads consisted of a metalled surface (ie gravel or pebbles) on a solid foundation of earth or stone.

A simple yet technologically advanced plan was in place and implemented for the construction of each road.

Where possible, roads were built in the straightest line possible, only avoiding major terrain obstacles where it made practical sense. A Roman road was a multi-layered architectural achievement, but the construction process was fairly simple to define.

First the two parallel trenches were built on either side of the planned road, with the resulting earthworks, stone, etc., being dumped and built up in the space between the two ditches. The Agger, as this was called, could be up to 6 ft. (1.8 m) high and 50 ft. (15 m) wide. Alternatively it could be very slight or almost non-existent as was the case with most minor roads.

Next, the diggers would make a shallow 8 to 10 foot wide depression down the length of the agger, and line the edges with kerb stones to hold the entire construction in place. The bottom of this depression would then be lined with a series of stone fillers. 6 to 8 inch stones would form the foundation layer, with fist sized stones placed on top. In early roads the remaining gap would then be filled in with course sand to fill between the stones and to cover them by approximately 1 ft.

Later roads may have used Roman volcanic concrete to mix the entire mixture together making the whole structure more solid. The road surface was then laid down using large, tight fitting, flat stones that could be found and transported locally. These larger surface stones would be cut to fit when possible to make the surface as smooth and seamless as possible.

Bridle paths were then dug and smoothed, leaving the earth unpaved for horse travel. The roads were built for infantry, and it was easier on horse hooves to walk alongside the stone roads. Though the Romans did use horseshoes, they were tied on to the hooves, not nailed, making them unstable. Additionally, during the construction, forests and obstacles on either side of the road could be cleared to a considerable distance to guard against ambush attempts.


A Chart of Some Prominent Roman Roads

Did you know...
Roman roads were so effective that in the later empire they actually became a liability, because invading forces could travel along them just as quickly as the Roman armies!

Did you know...
After the slave revolt of Spartacus, as many as 5,000 to 6,000 captured slaves were lined up and crucified along the Via Appia as an example to others.