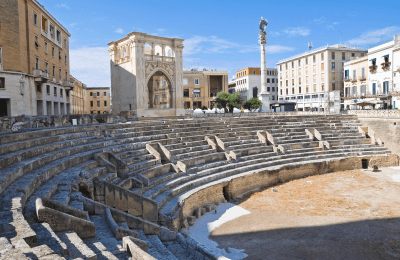 Roman amphitheaters were the ancient equivalent of today’s sports or concert venues. They were similar in design to an ice hockey stadium, in that there was a large oval space in the middle where the action took place, with raised seating all around for the spectators.

The word "amphitheater" is derived from the Latin amphitheatrum which translates into English as "theater all around". This references the fact that there are seats all around, and distinguishes amphitheaters from a smaller Roman theater which only had seating in front of the stage rather than wrapping all the way behind it (it wouldn’t be much fun trying to watch a play where the actors constantly had their backs to you!)

What Performances Took Place in a Roman Amphitheater?

Common events that were held within included gladiator combats, animal hunts and the execution of criminals and prisoners. Many towns and cities across the Roman Empire would come to build at least one amphitheater, with the size and number dependent upon the surrounding population.

Rather than coming out of the state purse, performances within an amphitheater were typically paid for by wealthy individuals who looked to win the support of the people, usually because they wanted their backing and votes in an upcoming political election. Games and events were also used by officials to try and placate a restless populace if they were becoming unhappy with how things were being run, and was a tactic frequently used by Roman Emperors to try and maintain the support of the people.

The seating area of a Roman amphitheater was known as the cavea (Latin for "enclosure") and, rather than a free for all, where a person sat was strictly determined by class and gender. The front rows were reserved for high ranking officials and nobility, with male citizens making up the majority of the rows behind them. At the very top, and with a worse view of course, were women and slaves.

The entranceways to the seats were very similar to modern stadia in the form of arched entrances located at various points within the blocks of seats. These are delightfully known as vomitoria and, as the term suggests, has at least a passing reference to being sick. The singular term vomitorium is a Latin word that translates into English as "to spew forth". Rather than having anything to do with feeling queasy at the gruesome sights unfolding down below in the arena, it actually referred to the rapid dispersal of people that would exit the amphitheater once the festivities had come to a close. Literally a mass ejection or vomiting of people.

The Rise and Fall of the Roman Amphitheater

It is difficult to pinpoint when the first Roman amphitheaters came to be built. Early written records make reference to wooden structures of similar shapes being erected in the Forum on a temporary basis from the second century BC, in order to provide seating for gladiator games.

As time went on, the size and construction materials used to build amphitheaters changed. Not only did they have to get bigger to accommodate an expanding population, but the governors and officials of towns and cities within the Empire liked to try and outdo each other by having the biggest and most spectacular public buildings.

The decline of amphitheater use can be traced to around the third century AD, due mainly to a combination of cost, and a change in public attitudes brought about through the increasing adoption of Christianity as the primary Roman religion.

The events staged within an amphitheater were notoriously expensive. Indeed, the extravagance and lavishness achieved was one of the most important drivers and reasons for a wealthy sponsor to put on the games in the first place. They wanted people to remember the spectacle they had just witnessed, and have them think that this was much better than the one put on previously by their rival!

The continual need to improve upon past performances and to outdo potential rivals obviously cost a lot of money. This was all well and good during the peak of Roman power when times were bountiful and fortunes could be made through trade and conquest, but as the Empire began to decline, so did the prosperity of the majority of its elite citizens. There simply no longer was the availability of easy money to both fund amphitheater events, or to support the upkeep and maintenance of these ostentatious buildings.

A shrinking Empire with less robust transport links also made it more difficult to ship the quantity of exotic animals required for amphitheater events, or at the very least, made it increasingly and prohibitively expensive to acquire them and do so.

Even more so than money, probably the biggest reason for the decline in amphitheater use came about as a consequence of the shift towards Christianity as the main religion of the Roman world instead of worshipping the many deities as in the time before.

Gladiatorial games and animal hunts now became to be seen as cruel and barbaric, and not the type of thing that a good Christian should be watching simply for entertainment. The wealthy now believed that they could use their money to attain access to heaven by giving it to the poor and needy, which further reduced the number of games put on.

The only other events that frequently took place up to that point were executions. But while executions still took place for the centuries after the total fall of the Roman Empire, and even up to the present day in many countries across the world, there was no need to maintain grand amphitheaters just for these short exhibitions that could easily take place elsewhere.

As a result of dwindling usage and available funds, many Roman amphitheaters fell into ruin, and their stone and other materials carried off and used elsewhere for the construction of new buildings and monuments.

Amphitheaters in the Roman world did not just provide entertainment for the masses; they also provided a livelihood and source of income for many enterprising individuals connected directly or indirectly to the amphitheater.

As well as making those who supplied the gladiators and transported the exotic animals from overseas provinces extremely wealthy, there were all manner of different industries that relied on the large number of people travelling and congregating near to the amphitheater when there was an event on. Refreshment sellers, betting bookmakers, prostitutes, people renting out rooms overnight for travellers, and many more, all depended upon those travelling to the amphitheater with money in their pockets to spend. 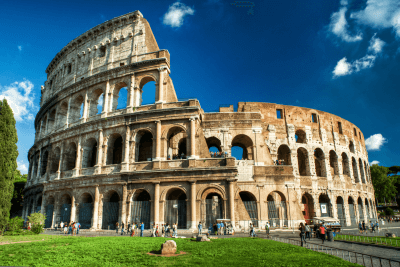 Despite many great amphitheaters being lost to history, thankfully a large number do still survive, even if - in many cases - only small pieces of their once former glory still exist. Some of the most prominent ones still surviving are listed below, but of course no article on Roman amphitheaters would be complete without mentioning the most famous one of them all...

The Flavian Amphitheater, better known as The Colosseum, is one of the most enduring and recognizable images for us today of Ancient Rome. Located on the east bank of the River Tiber in Rome, this magnificent structure could potentially hold around 55,000 people and was the jewel in the crown in terms of Roman arenas and stages for events that showed off the might and wealth of the Roman Empire.

To find out much more information about the Colosseum, including when it was built and its uses after the fall of the Roman Empire, please click here.

Spread all over the Roman Empire, there were more than 200 large and countless small amphitheaters, of which almost half are situated in Italy.

Below you will find an extensive list of the most important amphitheaters, giving priority to those amphitheaters of which the remains are still visible.

The list is based on Hönle and Henze (1981) and Golvin and Landes (1990). Not included in the list are the combitheaters that were used for varying purposes.


Did you know...
The name amphitheaters means "theater all around". This word, however, does not occur before the Augustan era, and was at first applied to the circus too.