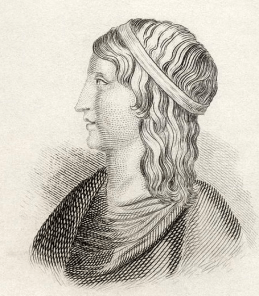 A Romanized Berber of the provincial aristocracy in Madura Africa, he was a gifted lawyer, travelling lecturer and an opponent of Christianity.

His literary interests involved mystical religions, magic and philosophy. What survives are his Apologia, a defense of himself against accusations of practicing magic, the Florida, a collection of his lectures and philosophical writings, and the Metamorphoses, a popular romance.

Also: De deo Socratis, De dogmate Platonis, De Mundo and his famous Aureus Asinus. His works are a valuable source of social life and the religious trends of the times. "Psyche lamented her solitary life, and being disquieted both in mind and body, although she pleased all the world, yet hated she in herself her own beauty."


Did you know...
In 158 AD, Apuleius stood trial before the Roman provincial court at Sabratha, where he delivered his own defense speech.