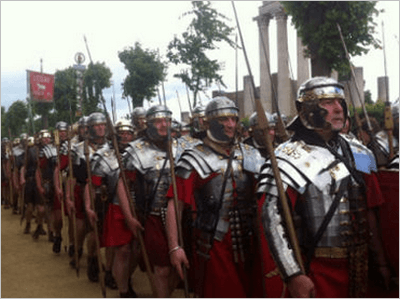 Legionary discipline was taken extremely seriously by the Romans. During a time when loyalty to the state, and later to include personal loyalty to the emperor, was demanded and expected, any deviation from this was met with extreme forms of punishment.

Although less severe punishments were used primarily to keep order, any form of insubordination, desertion or mutiny could potentially result in death; without trial and simply on the say so of a military commander.


Why Were Punishments so Harsh?

Although much harsher than punishments given out to soldiers in today's world (at least in most countries anyway), the two reasons for discipline are still the same: to punish wrongdoers and to act as a warning and deterrent to others. By failing to act against transgressors, it would potentially encourage others, and was something that could simply not be tolerated by Roman military commanders. 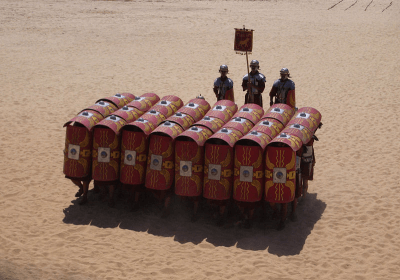 The Roman army, and the legions in particular, depended upon a strength in unity. Their battle formations and tactics could only work if individuals acted in the interests of the unit as a whole. For instance, the testudo (tortoise) formation comprised the first row of men placing their shields in front of them, whilst those behind them placed their shields over their heads. In this way, the whole unit was concealed in one protective “shell”, and provided excellent protection against arrows and other aerial projectiles. This formation depended on each legionary to hold their shield in the correct place, thus not only protecting himself, but also his fellow comrades.

Formations such as the testudo could only work if soldiers acted as a collective. They needed to stand firm to protect the lives of those next to them, as well as getting into such a position as soon as instructed. Heavy-handed punishment and discipline served not only to instil this sense of unity and brotherhood amongst the men, but also to ensure that the soldier's mindset was conditioned to follow any command instantly and without question or hesitation.

Punishments also needed to be harsh because not every soldier would have had the same unswerving loyalty to Rome. As the empire expanded, more recruits were needed, and these often came from conquered provinces who, whilst assimilated into the Roman way of life, would often not have quite the same enthusiasm to lay down their life for the good of the empire as a solider who had been born and bred in Rome would have.


Was Legionary Discipline Different in the Republican and Imperial Periods?

While both periods had harsh punishments and instilled strong discipline within its military ranks, during the Republican era the discipline of the legions was more strict and harsh than in the Imperial era.

This may be the result of several factors, including the volunteer nature of the Roman Imperial legion. During the Republican period, conscription (forcing citizens to undertake military service) took place to provide soldiers for the legions. Armed primarily with whatever they could find, a Republican legion was far from the shiny, uniform in appearance fighting force that the land units would come to be!

As Rome's territories expanded, the need for a more professional, paid army become more apparent. Not only this, but by the first century BC, the small land-owning classes had declined in number to such an extend that it was becoming more difficult to find conscripts. The transition to a professional paid army began with the reforms implemented (out of necessity) by the consul Gaius Marius in 107 BC (for more information on these reforms and the transition to a professional standing army, see the sub-section Marius Reforms the Legions).

It was later refined by Rome's first emperor, Augustus, who re-organized the legions by combining the men from his own legions with those soldiers willing to stay in the Roman military from Mark Antony's defeated army (see sub-section Caesar's Heir). This new army was initially paid directly by Augustus, ensuring loyalty to him, and after 6 AD, payments were to come from a new public treasury (the aerarium militare). For more information on this, see Augustus and the Legions.

A professional, paid army that was made up of men who had willingly chosen to be there, was obviously inherently more likely to have better discipline and motivation than one made up of people who had been forced into joining and, whilst in all likelihood still devoted to the state, probably resented (if only even a little bit) being taken away from their nice comfortable - and safer - life back home.

Another possible reason for slightly more leniency in the Imperial period was the need for the Emperor to keep the army loyal and happy to preserve his position. While discipline was obviously needed, being overly harsh or downright cruel to the army was not the way to inspire loyalty. This was found out the hard way by a small number of emperors who got on the wrong side of their own personal legion/bodyguard, the Praetorian Guard.


Execution. The death penalty was a rarely used punishment for desertion, mutiny or insubordination. In cases where execution might be considered, factors such as the soldier's length of service, his rank, previous conduct, age, etc. were taken into account. Special consideration was given to young soldiers.

Decimation. An extremely rare style of the execution penalty was called decimation and would only be used in extreme cases of cowardice or mutiny. Every tenth man of a centuria, cohort or even the entire Legion, randomly chosen by a draw of lots, was killed by being clubbed or stoned to death by the other members of his unit. The effect on future performance of the legion could be overwhelmingly positive or an absolute disaster.

Disbandment. An entire legion could be disbanded without the customary land settlements and pension disbursements. This, like the other forms of extreme punishment, was rarely done, and was more likely to exist as a deterrent to any legions who may be loyal to a political opponent or group.

For example, Legio I Macriana Liberatrix ("Macer's Liberators"), was formed by Lucious Clodius Macer, rebellious Governor of Africa, in 68 AD, to be used against Nero. In the midst of this year, that came to be known as the Year of the 4 Emperors, Galba was one of the men who took claim to the throne. Galba, distrusting of Macer's intentions, ordered the death of Legio I's commanding officers and the disbandment of the questionably formed legion. It was removed from service to the empire without ever seeing action.


Despite the strict environment of Roman military life, the less extreme punishments below were more common than any of the above, and are also more recognizable to us today. They included:

Did you know...
Discipline was important and infractions were heavily punished by the centurions.