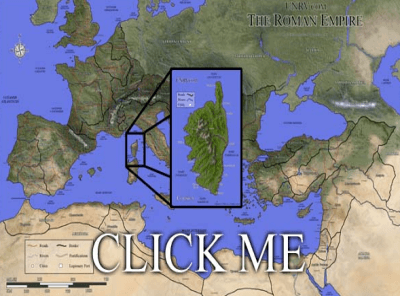 The first settlers on Corsica were Greeks from Phocaea on the coast of Asia Minor. In 565 BCE, they founded the colony of Alalia (now Aléria) on the east coast of the island, which they called Kalliste or 'the most beautiful one'.

In 540 BCE in a decisive battle at Alalia, the Greeks were beaten by an alliance of the Carthaginians and Etruscans, which limited their expansion in the western Mediterranean. The Carthaginians took over the colony and called the island by the old Greek name Kyrnos, which means 'full of forests'.

But in spite of this and the later military domination by Carthage (278-259 BCE) the Greeks still continued to exercise power in the colony, controlling the trade in wood, resin and honey.

Soon after the beginning of the first Punic War (264-241 BCE) the Romans took Alalia (259 BCE.) and began their conquest of Corsica. But the interior was not pacified until 162 BCE. Towards 100 BCE Alalia city was rebuilt and renamed Aleria, it became a great economic capital with its fortifications, hot springs and important naval base.

At the same time Mariana was built at the mouth of the "Golu". Latin became the spoken language of the country and Roman civilization flourished, but Corsica would become a popular destination of exile for political opponents for whoever was in power in Rome. Corsica would remain a relatively isolated and distant part of the western empire until invasion by Vandals in 436 AD. Corsica was very rugged and not well suited to major agricultural pursuits, but did export iron and silver.

Did you know...
History shows that Greeks from Phocaea, in Asia Minor, founded the east cost town of Alalia. Already by 264 BC, the Carthaginians had footholds on Corsica. Carthage intervened in a dispute between the two major cities on the sicilian west coast, Messana and Syracuse, to established that way a presence on that island. This happend during the First Punic War which was fought from 259 to 163 BC.