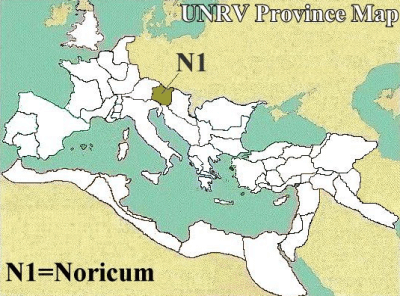 The original population of Noricum (mostly modern day Austria) consisted of Illyrians, who after the great emigration of the Gauls became subordinate to various Celtic tribes. It is in Noricum that we first hear of almost all the Celtic invasions, and was the starting-point of the attacks upon Italia in the early Roman Republic.

In approximately 200 BCE, an alliance of 13 of these tribes established the first Celtic Kingdom in Europe, supported by a Council of Elders of all the represented tribes.

In the latter part of the 2nd Century BCE, the Taurisci tribe would call upon Rome for help against the migrating Germanic tribes, the Cimbri and the Teutones. Within the general proximity of Noricum, Consul Papirius Carbo led the Roman army to a crushing defeat at the hands of these Germanic tribes in 113 BCE. The victorious tribes continued to move west through Gaul and avoided Italia for another 10 years, but in 103 BCE, after other considerable victories their return to the region posed a serious threat to Rome. Roman superiority would be established, however, when Gaius Marius defeated the Teutones at Aquae Sextiae and Q. Lutatius Catulus defeated the Cimbri at Vercellae in 102 and 101 BCE respectively.

From that point on Noricum formed a peaceful border state of Rome and the mining industry and metalworking boomed. In 48 BCE during the Civil War between Caesar and Pompey, the Noricans threw in the full weight of this considerable industry to Caesar's cause. The Norican King Voccio, who was an elected King, also supplied Caesar with an impressive auxiliary calvary unit. Caesar's ultimate victory would help cement the friendship between Noricum and Rome throughout the rest of the Empire's history.

King Voccio would continue to play an important role in Noricum. Just prior to the beginning and just after the conclusion of the Roman Civil War, Voccio was instrumental in driving out invading Dacians around 50 BCE and the Boii tribes around 40 BCE. However, a Norican joint invasion of Istria along with the Pannonians led to a military response by Rome under Publius Silius. The death of Voccio followed in 16 BCE, and Noricum became a client Kingdom to Rome and would eventually be established as a full province under the Emperor Claudius in the mid 1st Century CE. With the direct government of Rome the Noricans gained full Latin citizenship quite quickly and never had to give up their own elected officials (doyens).

For the next two centuries, the region was established as both a base of operations and a buffer zone against the Germanic tribes, the Marcommani and the Quadi. A near continuous danger of warfare would exist with these tribes over this period. Upon the death of Marcus Aurelius in the Noricum city of Vindobona, while on campaign against these tribes, an uneasy peace would exist for the Norican people. For the next century and a half the threat from the Germanic tribes was at least minimized. By the late 4th and early 5th centuries, however, this border province, along with Germania and Raetia, was among the first to be toppled by migrating tribes.

Very similar to the Raetia province, Noricum throughout the existence of the Roman Empire was a frontier province in direct contact with the Germanic tribes across the Danube. Several fortifications (limes) guarded both the river crossings and passes through the Alpes. Recruited for Marcus Aurelius' war against the Marcommani in the mid 160's CE, Legio II Italica Pia, along with numerous local auxiliary, was permanently stationed in Noricum.

The country was mountainous and the soil poor, but it was rich in iron, and supplied material for the factories, forges and smithies in Pannonia, Moesia and northern Italia. The Norici, a Celtic tribe along the Danube, were among the world's first and greatest steel smiths. Noric Steel was famous throughout the empire, and a sword of this fine material and design was considered a veritable treasure in the time of Augustus.

Other inhabitants were more apt to cattle-breeding than to agriculture, although it is probable that the Romans, by draining the marshes and cutting down timber and by increasing fertility, brought more farming to the region. Gold and salt were also found in considerable quantities. The plant called saliunca (the wild or Celtic nard) grew in abundance, and was used as a perfume.

While there were several tribes in the early alliance that brought about the formation of the Norican Kingdom, only a few developed into prominence and the early Illyrians were of no serious consequence within the province after the Celtic migrations. Both the Norici and the Taurisci enjoyed the friend and ally status of Rome and prospered as fully romanized citizens throughout the empire.

Did you know...
Noricum was, in ancient geography, a Roman province bounded on the north by the Danube, on the west by Raetia and Vindelicia, on the east by Pannonia and on the south by Pannonia and Italy, corresponding to the greater part of the modern Styria and Carinthia, and part of Austria, Bavaria and Salzburg.