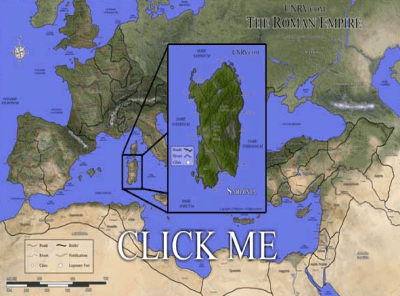 The first people to settle in Sardinia probably came from the Italian mainland and, in particular, from Etruria.

Those who populated the central region of the island around the salt lakes of Cabras an S. Giusta, arrived probably from the Iberian Peninsula by way of the Balearic Islands and around the gulf of Cagliari there were several groups.

As time passed, the Sardinian peoples became united in language and customs yet remained divided politically into various smaller tribal states. Sometimes they banded together, while at others they were at war with one another.

Around 1000 BCE the Phoenicians began to settle on the shores of Sardinia with increasing frequency. With the consent of local tribes the more common ports were those later named as: Caralis, Nora, Bithia, Sulcis, Tharros, Bosa, Torres and Olbia. They soon became important markets and after a time they formed into real towns inhabited by Phoenician families who traded on the open sea and with the Nuragic Sardinians inland.

In 509 BCE, with Phoenician expansion inland becoming ever more menacing and penetrating, the native Sardinians attacked the coastal cities of the Phoenicians. In order to defend themselves, they called upon Carthage for help. The Carthaginians, after a number of military campaigns, overcame the Sardinians and conquered the most mountainous region, later referred to as Barbaria or Barbagia. For 271 years, the splendid Carthaginian or Punic civilization flourished alongside the fascinating local Nuragic culture.

In 238 BCE, the Carthaginians, defeated by the Romans in the first Punic War, surrendered Sardinia which became a province of Rome. The Romans enlarged and embellished the coastal cities and with their armies even penetrated the Barbagia region, thereby bringing down the Nuragic civilization. The Roman domination in Sardinia lasted 694 long years but was often opposed by the Sardinians. Nevertheless Sardinia adopted the Latin language and civilization.

Sardinia developed into a major source of grain and salt for the Empire, but also exported wines, olives and was also home to several mining operations. By the 5th century AD Germanic tribes swept through the western empire with devastating results. Sardinia fell to the Vandals, and out away from the Romans, in AD 436.