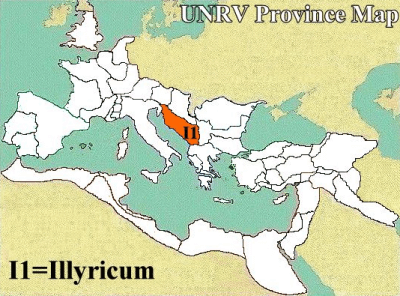 Illyricum was a district of the Balkan Peninsula, which has varied in extent at different periods. To the Greek geographers Illyria meant the eastern shore of the Adriatic Sea and the adjoining mountainous territory stretching into the interior, all of which was the abode of Illyrian tribes.

During the time of the division of provinces under Hadrian, it was subdivided into seventeen provinces, comprising also Thrace. During Constantine the Great in A.D. 324, Illyricum was one of four prefectures assigned to Western Rome.

In Illyricum's early history, constant warfare with neighboring tribes forced the Illyrians to unite for the common good. Over time, they became a constant source of irritation for the Spartans and the Macedonia. In 424 B.C, they assaulted the Spartans during the Peloponnesian War, on their march across Thessaly and Macedon causing a Spartan retreat. In fact, in 359 BC, the Illyrians nearly succeeded in destroying Macedon, however, Philip, the father of Alexander the Great, subdued the Illyrians and captured part of their kingdom.

After the fall of Alexander and the decline of Greek power during the 3rd century BC, the Illyrians turned their fortunes to piracy. Conducting their raids from the secluded harbors of the coast, they ravaged the shores of Italy and Greece and preyed on the commerce of the Adriatic. In response to calls for help from Greece, Rome demanded a cessation of the piracy, but the Illyrians rejected. This rejection led to two successive defeats in the Roman wars of 229 and 219 BCE, the Illyrians would submit.

Illyria, however, remained a powerful kingdom with its capital at Skodra, until 180 BCE, when the Dalmatians declared themselves independent of king Gentius. So the history of Dalmatia began when the tribe from which the country derives its name declared itself independent of Gentius, the Illyrian king, and established a republic. After the Dalmatians had split from the kingdom, the Romans conquered Gentius and established (168-167 BCE) one of the earliest Roman colonies as Illyricum.

In 156 BCE the Dalmatians were for the first time attacked by a Roman army and compelled to pay tribute. They, however, resisted formal surrender and Roman control until the early part of the first century CE. They joined in an attempt with the Pannonians and to liberate their territories from Roman occupation in 6 CE and they were not finally subdued until 9 CE by Augustus and Tiberius. From then on, all of Illyria was annexed and united as the Roman province of Illyricum.

Illyricum prospered, as it became an important trade link between western and eastern Europe. The ports on the Illyrian coast became important trade routes as well, and the Latin influence spread quickly and without resistance throughout the region.

Known to be aggressive people in their early relations to Rome, they were eager and readily recruited into the Roman Legions. Illyricum eventually grew into one of the leading recruiting grounds for the Roman armies. Eventually, as it became highly Romanized, it was known as the birthplace of several Emperors including Diocletion. Parts of the area remained in the Byzantine Empire until the 14th century AD., though it mostly fell to Serbs, Bulgars and others by the 7th century.

Illyria's position on the Adriatic Sea and proximity to the Italian province made it an important stop in trade with the eastern empire. Gold, iron and silver were found in adequate quantities in the region and animal hides were also exported.

Illyricum and Dalmatia were very tribally diverse. People of Italic, Celtic, Thraco, Hellenic and Illyric descent all settled and spread throughout the region.

There were a number of tribes, of disputed Illyrian origins, that settled the eastern Italian coast such as the Messapi, the Iapyges, the Picenti, and the Veneti to name a few.

The Breuci settled on the Save river in northern Bosnia and it was this tribe that rebelled against the Roman occupation.

The Scordisci occupied the area in northern Serbia where the Save and Drave rivers meet and they may have migrated from the Scordus mountain range in Albania and western Macedonia as the name suggests.

The Triballi occupied an area in northwestern Bulgaria. The Agrianes once dwelled in the area of lower eastern Serbia. The Paeones or Paeonians once occupied the territory of northern Macedonia.

The Chaoni lived in the region of southern Albania and the powerful Molossi were found in the border region of Albania and Greece.

The Ardiaei, once an inland tribe, eventually settled on the Adriatic coast. The ancient geographer, Strabo, lists the Ardiaei as one of the three strongest tribes - the other two being the Autariatae and the Dardani. Situated in the central Bosnian/Serbian border, Strabo expresses the Autariatae as the most powerful of the Illyrians. Strabo writes of the Dardani or Dardanians as 'so utterly wild that they dig caves beneath their dung hills and live there.

The Dardani (once occupied what is now Kosova and southcentral Serbia. They would eventually be subdued by the Ardiaei and then later by the Romans. The Delmatae or Dalmatians were situated on the southern Croatian coast and came on to the historical scene during the Roman conquests. The Encheleae controlled most of southern Illyria. The Liburni, seafarers, were described as the masters of the Adriatic Sea and once occupied the northern Croatian coast and surrounding islands. The Taulanti dwelled in what is today central Albania and were known to have dominated the area thwarting foreign rule.