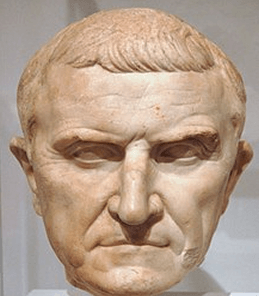 Marcus Licinius Crassus (115 - 53 BC) was the son of a Censor and of a prestigious Plebeian family. While of the highest order of equestrian social standing, the Crassus family was of modest wealth, comparable to others of the same order. The family sided with the Optimates, and Sulla, in opposition to Marius and Cinna. This political turn of events was not only a dangerous set of circumstances for Crassus, but also his opportunity for fame and fortune.

While in his late 20's, in 87 BC, Marius and Cinna took control of Rome while Sulla was fighting the Mithridatic War. In the bloodbath that followed, the Crassus family was at the top of the list of targets. His father and one of his brothers were both killed, while he managed to escape with a small party to Spain. His father had served as Praetor and established a small client base there. One such client, Vibius Pacacius hid Crassus in a cave on his property for as long as eight months. Provided with food and daily needs through Pacacius' slaved, Crassus was able to wait out the Consulships of Cinna.

When Cinna died in 83 BC, and Sulla prepared to march on Rome, for the second time, Crassus eagerly prepared to join him. He personally raised a small force of 2,500 men and marched to Italy to join Sulla. At the Battle of the Colline Gate, Crassus was pivotal in turning the tide for Sulla, but favoritism showed towards Pompey began a life long rivalry between the two men. While Crassus built a solid reputation as a soldier, Pompey was dubbed with the title Magnus (the Great) and was a personal favorite of Sulla.

After Sulla took power in Rome his supporters fed on the opportunities provided by his policy of proscription and confiscation. None of these men took more advantage than Crassus. He bought up land and properties of the condemned at cheap prices and made a fortune in mining and slave trading. He maintained his own private force of slaves which he used as a fire-fighting brigade. However, his real intention was not providing a public service, but bargaining people into selling property cheaply. His troop would arrive at the scene of a burning building, and Crassus would bargain with the owner to buy the property. The longer the owner resisted, the longer Crassus would lower the price and let the property burn on. At times when an owner refused to sell, his slaves would let the property burn completely to the ground. While Crassus would eventually make himself the richest man in Rome through these less than the ethical methods, Pompey established himself as Rome's premier general.

Unable to match Pompey in sheer military capability, Crassus instead focused on pure politics. He followed the cursus honorum to the letter of the law and built a strong client base through good random acts of kindness. From influencing the courts to providing personal loans or support for political campaigns, Crassus built a powerful following. By the time Pompey was deeply embroiled with the formidable Sertorius in Spain, Crassus had himself elected as Praetor. Social conditions were deteriorating again with the slave population and Crassus was at the right place at the right time. As the Third Servile War, or Spartacus Slave Rebellion, broke out, Crassus was in prime position to increase his power base.

After serving his joint Consulship with Pompey in 55 BC, Crassus was eager to emulate his triumvir partners with military glory. Having last seen success on the battlefield against Spartacus nearly 20 years prior, Crassus took Syria as his province for 54 BC, with the full intention of attacking the Parthian empire. Many within the Senate opposed Crassus' plans as the powerful Parthians had never done anything of great harm to Roman interests. Little could be done to stop a man with the power of Caesar and Pompey behind him, and an undying thirst for glory and wealth.

First arriving in Syria in late 55 BC, Crassus spent the bulk of the next year preparing his legions and squeezing the Asian territories for money. By late 54 BC, he was joined by his son, Publius Crassus and his Gallic cavalry, as he had recently been a Legate in the service of Caesar. With dreams of glory and 7 legions compromising some 30,000 men, along with the 1,000 cavalry of Publius, Crassus crossed the Euphrates River into Mesopotamia in early 53 BC. Initially, the Hellenized populations there quickly offered allegiance to the Romans and Crassus was certainly heartened. They were joined by Artabazes, king of Armenia, who was encouraged by the Roman presence and opportunity to rid himself of Parthian rivals. He encouraged Crassus to march through his own country, which would provide opportunity for supply and terrain suitable to defend against the vaunted Parthian cavalry. Crassus preferred the faster more direct route straight southeast through Mesopotamia and towards the cities of Seleucia and Ctesiphon. Perhaps sensing disaster, Artabazes took his own 6,000 Armenian cavalry home with him.

Conveniently, in what seemed a stroke of luck to the Romans, a Nabataen chieftan Ariamnes joined Crassus with 6,000 of his own cavalry. Unbeknownst to the Romans, Ariamnes was actually a spy sent by the Parthians in order to lead the Roman army into a trap. He convinced Crassus that the Parthians were on the run in advance of the Roman forces. With this information, Crassus was convinced that he made the right decisions and continued with haste along his straight desert route. Sure that little resistance would be met he was unconcerned with the hazards of desert travel and the vulnerability caused by open terrain. However, the Parthian King Orodes II had already devised a plan to stop the Romans using Ariamnes to mislead Crassus. Part of the Parthian army was sent to Armenia to punish Artabazes for siding with the Romans in the first place, and another force under the great clan leader Surena was sent to pre-occupy Crassus.

At this point Ariamnes convinced Crassus to move away from the Euphrates and deeper into hostile territory. Initially, there seemed little cause for concern, but as the miles of desert wasteland drudged on, moral was certainly at a dangerous low. The Roman officer staff certainly suspected treachery and tried to convince their commander to turn back or at least not to trust Ariamnes. Even a messenger from Artabazes, sent to inform Crassus of the Armenian cavalry's inability to return, suggested that the Romans take a different route.

This only inspired Crassus to anger and he vowed revenge, despite the fact that it was sound and practical advice. As the tension was building between the Roman general staff and moral was terribly low, Ariamnes knew his trap could be sprung. He told Crassus that his cavalry would depart to harass the enemy where it could, but that the Romans should continue on through the heart of the desert terrain at all haste. Crassus seemingly continued to trust the Nabataen commander, perhaps blinded by greed and told of fabulous riches. He ordered his advance to continue at even greater speed certainly punishing the men in the heat of the desert. By the time they approached the inland town of Carrhae, the Roman legions were exhausted and in complete disorder. Unfortunately for them, the trap sprung by the Parthians was perfectly played. Scouts sent out in advance of the main body returned, informing Crassus that most of their unit had been killed and that the Parthians were massing nearby.

Did you know...
An Equestrian (Latin eques, plural equites) was a member of one of the two upper social classes in the Roman Republic and early Roman Empire.