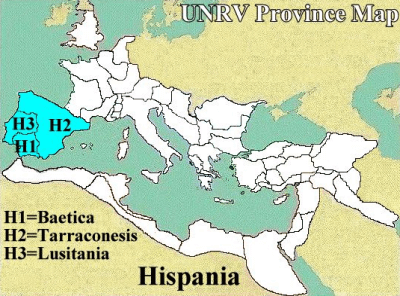 Roman armies invaded Spain and used it as a training ground for officers and as a proving ground for tactics during campaigns against the Carthaginians and the Iberians. Iberian resistance was fierce and prolonged, however, and it was not until 19 B.C. that the Roman emperor Augustus (r. 27 B.C.-A.D. 14) was able to complete the conquest of Spain.

Romanization of the Iberians proceeded quickly after their conquest. Called Hispania by the Romans, Spain was not one political entity but was divided into three separately governed provinces (nine provinces by the fourth century A.D.). More important, Spain was for more than 400 years part of a cosmopolitan world empire bound together by law, language, and the Roman road.

The Roman conquest of Hispania (roughly modern Spain and Portugal) began mainly due to the actions of Carthage. At the end of the First Punic War (264-241 BCE) Rome defeated Carthage and claimed Sicily, Sardinia, and Corsica. This deprived Carthage of a main source of wealth and manpower. As a result of this burden Carthage placed an increased emphasis on Hispania.

In 228-227 Carthage founded the city of Cathargo Nova on the southeast coast. This coast was rich in silver, and the Carthaginians wished to exploit it. Soon Carthaginian influence spread all along the eastern coast and began to alarm the Massalia who Rome had signed a treaty with. In 226 Rome signed a treaty with Carthage, confining Carthaginian expansion to south of the Ebro river, and Rome to the north. The Romans, however, made an alliance with the town of Seguntum (modern Sagunto), which is located about 100 miles south of the Ebro river.

In 219 BCE Hannibal, the Carthaginian leader, attacked, and laid siege to Saguntum. In 218 BC the Roman senate came to the assistance of their allies. They declared Hispania a Roman province and dispatched Cnaeus Cornelius Scipio with two legions to block Carthaginian forces moving towards Italy. He landed at the Greek colony of Emporion and established a base there. Unfortunately for Scipio, he found that Hannibal had slipped past him and crossed the Pyrenees Mountains to invade Italy.

With Hannibal gone he switched his focus to blocking reinforcements from Carthage, or Cathargo Nova. Cnaeus advanced to Tarraco (modern Tarragona) and established a stronghold. In 217 he defeated a Carthaginian fleet in the mouth of the Ebro River. In 215 BCE his brother Publius Scipio arrived with reinforcements, and in 214 the Romans advanced and recaptured Saguntum. In 213 however disaster struck the Romans. Hasdrubal, Hannibal's brother, with and army of 40,000 and supported by Iberian mercenaries routed the Romans at Castulo (modern Cazlona) and killed both the Scipio brothers.

Another Scipio, Publius Cornelius Scipio, was sent to replace his father and uncle. In 209 he advanced and succeeded in capturing the city of Cathargo Nova, Carthage's main supply-base in Spain. Following his victory at Cathargo Nova, Scipio fought for three more years before he finally forced the remainder of Carthaginians from Spain. In 206 Scipio returned to Rome and brought the war to Carthage in Africa. There he defeated Hannibal in 202 BC at the Battle of Zama, and earned the name Scipio Africanus.

Rome's control of Hispania however was not uncontested. After the war Rome divided Spain into two provinces, known as Hispania Citerior (Near) and Hispania Ulterior (Far). Both of these provinces were rich in silver and other precious metals, and their governors did not hesitate to extort extra wealth from the local inhabitants. During the second Punic war the native tribes of the region switched between supporting the Carthaginians and the Romans. Eventually they turned fully against the Romans in a series of revolts.

The first to revolt were the Ilergeti tribes. Scipio put down this uprising in 206 BC, but they revolted again the next year. Scipio's successors were able to suppress the tribes, but in 197 the Turdetani who lived in the southeast rebelled and the central and north-eastern tribes soon followed suit. Marcus Porcius Cato became consul in 195 BC, and was given the command of the whole peninsula. Cato put down the rebellion in the northeast and the lower Ebro valley. He then marched southwards and put down a revolt by the Turdetani and Celtiberian tribes. Cato returned to Rome in 194 leaving two praetors in charge of the two provinces.

For the next 175 years Spain was an almost constant battleground. Between 82 and 72 BC the senator Quintus Sertorius fought a civil war against Rome. Sertorius was a supporter of Gaius Marius and later after Marius's death, of Lucius Cornelius Cinna. Sertorius was appointed governor of Hispania Citerior in 83 BC. His first act as governor was the expulsion of the incumbent governor, who was a supporter of Sulla. During the next ten years he fought to gain control of both Hispania Citerior and Hispania Ulterior, and defeated several armies sent by Rome.

These victories won him the support of Lusitanian and Celtiberian mercenaries. By 77 BC Sertorius had control of most of Citerior, and had established a new capital at Osca. Between 79 and 72 BC Sertorius fought against the armies of Caecilius Metellus and Pompey. The long fighting eventually weakened Sertorius' forces, and led to defections by many of his Celtiberian allies. In 72 BC Sertorius was murdered by Perperna, one of his own generals.

The Lusitani and Celtiberians who lived on the west coast and central plains began raiding Roman Spain in the 160s, and continued to resist Roman attempts to pacify them until 133 BC. The Lusitani tribe revolted again in 61 BC which was put down by Julius Caesar. The final conquest of Hispania was accomplished under Augustus, between the years 39 and 19 BC. In 13 BCE Hispania was divided into three provinces: Baetica, Lusitania, and Tarraconensis.

Hispania was significantly Romanized throughout the imperial period and it came to be one of the most important territories of the Roman Empire. Emperors Trajan and Hadrian were both born there and most all of the people of Hispania were granted Roman citizen status. Despite this, Legio VII Gemina was permanently stationed in Hispania Tarraconensis. Its base was at Leon to be close to, and to protect the gold and iron mines of Gallica. Hispania finally fell from the Roman Empire with the great Germanic migrations of the 4th and 5th centuries AD. Alani, Seuvi, Vandals and Visigoths poured through Gaul and into the west, effectively removing Hispania from Roman control by about 409 AD.

Hispania's economy expanded greatly under Roman Rule. The province, along with North Africa, served as a granary for the Roman market, and its harbors exported gold, wool, olive oil, and wine. Agricultural production increased with the introduction of irrigation projects, some of which remain in use even today. Much of daily life consisted of agricultural work under which the region flourished. Much of the eastern region cultivated grapes and olives to supplement the economy. Silver mining within the Guadalquivir River valley became an integral part of Iberian society. In fact some of the Empire's most important metal resources were in Hispania. Gold, Iron, Tin, Copper and Lead were also all mined in abundance.

Along with the following tribes, the people of Hispania had a great deal of influence from Phoenician (Carthaginian), Greek and Roman settlements.

The Lusitani - Were a group of warlike tribes who, despite defeats, resisted Roman domination until their great leader, Viriatus, was killed (139 BC). In the 1st century BCE they joined in supporting Sertorius, against the government in Rome. The Lusitani lived in what is now Portugal.

The Celtiberians or "Celts of Iberia" - In Roman times the Celtiberians were composed of the Arevaci, Belli, Titti, and Lusones. The Arevaci dominated the neighboring Celtiberian tribes from the powerful strongholds at Okilis (modern Medinaceli) and Numantia. The Belli and the Titti were settled in the Jalon valley, the Sierra del Solorio separating them from the Lusones to the northeast.

The Iberians - Settled in the southern and eastern sections of what is now Spain, from which the entire peninsula got its name. Iberian applied to all tribes that settled by the 5th century BC between the Iberus River and the Huelva River. The most important of the Iberian tribes were the Bastetani, who occupied the Almeria and mountainous Granada regions. To the west of the Bastetani were the Turdetani who were the regions most powerful. The Turdetani tribes were located around the Guadalquivir River valley and were greatly influenced by the Greeks in the Emporion and Alicante regions. Towards the southeast greater influence was found from the Malaca, Sexi, and Abdera.