Rome and America: The Great Republics - What the Fall of the Roman Republic Portends for the United States 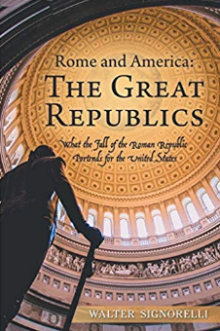 Comparing and contrasting the rise and decline of the Roman Republic and the United States of America, Signorelli describes fascinating parallels and influences: "military and civil structures that enabled them to surpass all other contemporaneous nations" (1); Latin mottos; civic architecture; the overthrow of a monarch's rule; civil war in both republics; the frequent portrayal of American founders in togas; the dependence on slaves; "citizen equality before the law" (11); the need for violence against internal and external enemies, with "early successes reinforc[ing] the belief in conquest as the best security" (25); and long-running and destructive conflicts between populists and conservatives.

Items of interest abound: George Washington's Secretary of War proposed a standing army of 5,120 men - the same number as in a Roman legion, and the campaigns of the Gallic leader Vercingetorix (Related Page: Julius Caesar - Revolt in Gaul) and the Indian chief Tecumseh are neatly compared in a few pages. As the book progresses, the comparisons become longer and more complex. A few specific examples:

Catiline and Aaron Burr, had careers, Signorelli says, that were ruined by false allegations of treason and libertinism, with their own pride and ambition contributing to their downfalls.

Julius Caesar (conquest of Gaul) and Andrew Jackson (military actions in Florida and Louisiana) were praised by many for actions which, at the very least, compromised the rule of law.

The role of virtue was crucial for both early republics, especially in terms of the patient acceptance of the rule of law, defined as an "abstract body of norms" (280). The destruction of virtue, especially in Rome, came about through "avarice and luxury" (185) which eased the import of "Greek sophistry, atheism and skepticism" (183). The author attributes the decline in the United States partly to 20th-century European ideas.

The declines played out historically in increasing war powers, and in the conflict between populist demagogy and stubborn resistance to necessary change on the part of wealthy conservatives, leading to the populist dictatorship of Julius Caesar, and his successor Augustus who destroyed the rule of law, while preserving an appearances-only form of republican rule.

The author notes that "excessive partisanship is a form of mob psychology" (383), and criticizes the leaders and followers of both sides, with equal fervor and fine impartiality.

The misuse of prosecutorial powers also played a role - he even pleads a case against American heroes, including the revolutionary war leaders and Abraham Lincoln, and relates several frightening cases in contemporary America, in which unelected and unaccountable environmental officials are able to bankrupt their targets, or force compliance, without any need to make, or even take a case to the courts.

We are not yet where Rome ended up, but Signorelli warns that a future president, enjoying a fawning press and bringing to a culmination all the defeats of rule of law described in the book, "might be able to exercise unchecked, unprecedented power" (575).

This is not an easy book to read. There are 575 pages of text, and while the author writes clearly (he is both a retired cop and a practicing attorney - two professions that demand clarity of expression - he may try the patience of some readers with his long citations of text and oratory. But if you like that sort of thing, as I do, and want to brush up on the details of a great deal of history and a huge cast of characters, this is a book for you. (On the downside, there are numerous typos and idiosyncratic uses of Latin.)

For those of us who care that we learn the lessons of history, it's also a timely warning.

The Middle Ages in 50 Objects
by Elina Gertsman and Barbara H Rosenwein
Women at War in the Classical World
by Paul Chrystal
Return of the Barbarians
by Jakub J. Grygiel
The Bible and Early Trinitarian Theology
by Christopher A. Beeley and Mark E. Weedman
Caligula
by Simon Turney