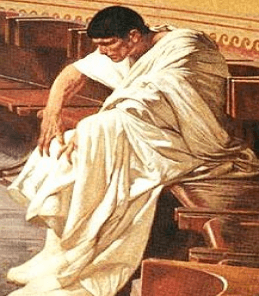 Cicero's nemesis and a key political figure in the 60s BC was Lucius Sergius Catilina. Like Crassus, Catiline profited enormously from the proscriptions of Sulla's dictatorship, but Catiline was notorious for his brutality and unlawful methods. While a definite villain of the Late Republican period, he was also the victim of Cicero's eloquent attacks, which certainly did little to commend him either with his ancient peers or in modern review.

In 67 to 66 BC he served as the Propraetor governor of Africa and may have used his position to extort large sums of personal wealth. Upon his return to Rome, he sought the Consulship but accusations of provincial mismanagement and a general distrust barred his ability to run.

In the year 65 BC, Catiline's efforts for the Consulship were blocked by impending trials for extortion, but massive bribery would eventually see his acquittal of the charges.

64 BC saw the election of Cicero as Consul. While Cicero, as a new man, wasn't overly popular with the Senatorial elite, he was a far better conservative alternative than the long line of corrupt individuals that sought the highest office. The choices for election in that year were Cicero, the despised Catiline, and his similar contemporary C. Antonius. To prevent a joint consulship with Catiline and Antonius, the Senate pushed Cicero forward along with Antonius to prevent the worst of three bad choices (in their opinion) from taking power.

During the Consulship of Cicero, he faced one early challenge of note. The agrarian bill of the tribune P. Servilius Rullus was intended to elect ten land commissioners with imperium. These commissioners would oversee all concerns with selling public land and distributions to veterans, with sweeping power. Cicero vehemently opposed the concept in light of the massive corruption of the time. Such positions would've undoubtedly been major sources of extortion and greed. The proposal was defeated in the plebeian assemblies, thanks in large part to Cicero's usual eloquent speeches. In a testament to his oratory skill and prestige, this was the first land reform bill that was ever defeated in a vote of the citizen assemblies.

For the year 62 BC, Catiline was again running for Consul and bribery was the operating standard of the day. Despite massive bribes, Catiline lost one again, however and certainly began to look at other measures to gain power. Shortly after the elections, a bundle of sealed enveloped were delivered anonymously to Crassus addressed to several Senators. In opening the one addressed to him, Crassus found that the letters were warnings, telling certain individuals that an impending massacre of many Senators was about to take place. Crassus took the letters to Cicero and it was discovered that they all said the same thing. Cicero then addressed the Senate with the plot and he was authorized with a tumultus, or a military emergency, to find the writer and uncover the plot. While Cicero tried to place the blame on Catiline, the author was never found, and it was suggested that the entire concept may have been hatched by Cicero himself as an excuse to prosecute troublemakers.

Regardless of the truth regarding Catiline's involvement in various plots, social conditions outside of Rome were again building a foundation for civil war. The great indebtedness of the Italians and other provincials was creating a situation ripe with potential disaster. In Etruria, a former Sullan centurion by name of C. Manlius was stirring up trouble by gathering weapons and recruits for a potential revolt. Cicero once again blamed Catiline, though there was no real evidence of his involvement. Cicero managed to convince the Senate of the danger and a senatus consultum ultimum was passed granting him extreme authority to deal with the threat.

Catiline, meanwhile, in order to thwart Cicero's attacks against him, organized a meeting of his supporters. In this meeting, while little real evidence existed, Cicero claimed that a plot to assassinate him was developed, as well as setting in motion the overthrow of the Senate. In a debate before the Senate, both men blistered each other in partially surviving speeches, but eventually Catiline volunteered to go into exile. While en route to his supposed destination of Massilia, however, Catiline instead joined with C. Manlius and his armed mob in Etruria.

While that move was suspicious enough regarding Catiline's various involvement in plots, another move by his supporters in Rome was even more damning. Representatives of the Gallic Allobroges tribe were in Rome discussing conditions relating to their own debt issues. The Roman conspirators sought to have the Gauls join in their rebellion, but the Gauls wanted little do with it and word reached Cicero of the conspirator's proposition. P. Cornelius Lentulus Sura was forced to admit to his own participation in the plot and a great debate over the punishment ensued. Gaius Julius Caesar, the praetor elect at the time, argued against death which was the prominent choice of the Senators. He suggested that the plot of Sura was different than the reason Cicero was granted a Senatus Consultum Ultimatum, and that the death penalty shouldn't apply. He, however, was over ruled by the veracity of M. Porcius Cato, and several conspirators were sentenced to strangulation.

In Etruria, the short lived revolt never really got off the ground. With little assistance from neighboring Italians, or the Allobreges, the plot was doomed to failure. In 62 BC, a force under M. Petreius destroyed the armed mob of Catiline and Manlius, killing Catiline in the process, and the conspiracy was over.

Cicero was hailed as the 'father of his country' for saving Rome from another rebellion. Later, however, the death sentences of various Senators would eventually be a source of much resentment. It's important to note, that Cicero's action may have been far more motivated out of fear of Pompey, than the actual conspiracy. Just as Pompey was getting set to return from his eastern conquests, with veteran legions in tow, conditions in Rome were similar to that of the Marian and Sullan civil war. In order to stabilize the situation, and not give an excuse for Pompey to march on the city, Cicero likely pushed his agenda of dealing with the potential plots as quickly and severely as possible. He would eventually pay a price of his own for it, however. Within a few years, Cicero himself would be exiled, with his actions during the conspiracy playing a prominent part. But far greater things were in store for the master orator, as he would play a major role in the coming fall of the Republic.

Did you know...
A Propraetor was a former praetor in charge of a province.

Did you know...
The first classical reference to the Allobroges is made by the Greek historian Polybius, writing sometime between 150 and 130 BC, and describing the crossing of the Alps by Hanibal in 218 BC.