Return of the Barbarians: Confronting Non-State Actors from Ancient Rome to the Present 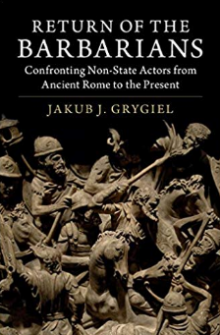 Note: Grygiel unapologetically uses the word "barbarian" to describe armed horsemen who raided settled societies and killed their inhabitants for glory, loot, and pleasure. I have followed that usage in this review.

In Return of the Barbarians, Grygiel draws fascinating analogies between states and "non-state actors" in ancient and modern times, citing Goths, Huns and Anglo-Saxons and others in the past, and Comanches and Al Qaida, with others, in the present. His general thesis is that ancient states such as Rome were bothered by terrorist incursions on their peripheries, against which they could make no effective response; with time, the barbarians grew in number, weapons and military skill to the point that they could trap and destroy large, organized military units, as the German leader Arminius did in 9 AD, when he destroyed Rome's "Lost Legions" in the forest of Teutoberg.

German clans became tribes and tribes became nations, under the leadership of men with sufficient charisma (and promises of loot). These were able to overthrow the Western Empire in the fifth century AD, as the Empire's weakened resources centralized defense in the cities, and left peripheral towns and provinces to fend for themselves. (He includes a fascinating excursus on how three Roman Catholic saint-bishops - Augustine of Hippo, Sidonius Apollinaris of Gaul, and Severinus of Noricum - used their organizing abilities, spiritual authority and pastoral concern to compensate for weak or absent Roman leadership in the fourth and fifth centuries, and fight an ultimately unsuccessful delaying action.)

As an intriguing aside, Grygiel notes that the Eastern Empire, Byzantium, survived longer, in part because its chief enemy was Persia, with which it could fight on familiar ground: large army vs. large army, utilizing the huge military units that only a well-populated and well-taxed empire could deploy.

Unsettled, highly mobile, savage, self-sufficient, led by charismatic leaders and incomprehensible to civilized man, barbarians in their earliest stages are generally immune to the defensive power of the armed state-deterrence and diplomacy. They are hard to deter because they are organized in small, hard-to-detect groups, skilled in using weapons stolen, bought or adapted from their enemies, wreaking pin-prick havoc against border communities and other soft targets, and then melting back into territories uncontrolled by powerful states and evading those states' better equipped, but harder to maneuver, armies. Diplomacy is of little use because it deals with negotiations about territory and the threat of war or sanctions to regain it; barbarians, by contrast, "for whom violence was a way of life and a source of power" (69), want loot, the glory of battle and the adulation of followers - not treaties.

According to Grygiel, the modern state, with its administrative and military powers, has dominated world polity since 1494, especially after vast areas that used to be available as sanctuaries for raiders, such as the American West and Russia's steppes, were made inhospitable through resource destruction (such as the near-elimination of the buffalo population in America) and a countervailing flood of soldiers and settlers.

Grygiel spends much of the last half of the book arguing that premodern conditions are returning, and the world is now under an early-stage threat from modern barbarians: with hackable IT technology and weapons that are becoming easier to copy, "lethality is no longer tied to a well-administered, resource-rich state" (87), and ungoverned spaces (Sub-Saharan and East Africa, Southeastern Europe) are providing safe havens for barbarians. Like their ancient counterparts, "they fight for the allegiance or respect of people, for glory or prestige, or for ideological and religious objectives that transcend material calculations" (103). In modern conditions, they are radicalizing themselves in a do-or-die, nothing-to-lose "process of rejecting the state" and its civilized norms. Grygiel also sees them as forming "virtual networks outside of state controls" (99), lines that were written when "Twitter revolutions" were considered more viable than they are now, and before such state actors as China showed what could be done to enforce conformity through social media.

This erudite book increases our understanding, and begins the discussion of remedies with a description of the virtues of local defense, assisted and promoted by central governments. I look forward to a follow-on book describing the full panoply of counter-measures, and I'm very glad that he is applying ancient wisdom to modern problems on the Policy Planning staff at the U.S. Department of State.

The Bible and Early Trinitarian Theology
by Christopher A. Beeley and Mark E. Weedman
Caligula
by Simon Turney
Group Identity and Religious Individuality in Late Antiquity
by Éric Rebillard and Jörg Rüpke
Early Ships and Seafaring: European Water Transport
by Seán McGrail
Lucullus: The Life and Campaigns of a Roman Conqueror
by Lee Fratantuono
Graffiti in Antiquity
by Peter Keegan
Pax Romana: War, Peace and Conquest in the Roman World
by Adrian Goldsworthy
Julius Caesar's Disease: A New Diagnosis
by F. M. Galassi & H. Ashrafian
Legio XVII: Roman Legion at War
by Thomas A. Timmes
A Sacred Kingdom: Bishops and the Rise of Frankish Kingship
by Michael E. Moore