Women at War in the Classical World 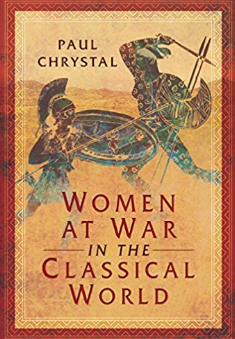 Paul Chrystal's Women at War in the Classical World is a useful overview of how women experienced warfare in the Classical World. He emphasizes that no matter where and when the warfare has occured, women were, and are, always involved. Chrystal primarily discusses the women involved in the wars and traditions of warfare of Greece and Rome, though he does address women of other ancient cultures in the introduction.

The book is usefully divided by time period and geographic location, with relatively short chapters focused on one topic or a few related topics. This makes it an effective introduction for students of the Classical World on a topic that is little handled in most textbooks of the period.

Beginning with Greek mythology and Homeric Epic, he shows that while women did not participate in the fighting of the Trojan war (with one exception), they are a vital part of it. It's not just that a woman is pointed to as the cause of the war itself, but women cause conflict within the Greek camp, act as narrators, and give the soldiers a reason to fight: in order to return to home and hearth. "Homer's women in the Iliad are clearly shown as appreciating the fact that their men are obliged to fight... The women never demand an end to the hostilities, unpalatable as those hostilities are." The position of women as narrators gives Chrystal the opportunity to introduce and explain the idea of teichoscopy, the narration from the walls, which is used across literature of the ancient world to give the point of view of non-combatants. Having addressed women as non-combatants, Chrystal dedicates a chapter to the Amazons, who served as almost anti-examples for the Greek world. The author then continues with women in plays, giving sketches of the women featured in Greek drama and comedy and how they interact with warfare.

Chrystal then moves on to Greek histories of warfare; Herodotus, Diodorus, Thucydides, and Plutarch all make a point of discussing women's involvement in warfare. In some cases, foreign women are used as an example of how truly barbaric the "barbarians" were; in other cases they are examples of how women have no choice but to take over as leaders when a man is unavailable or unable to do so. More often, though, both Greek and foreign women were simply fulfilling their usual roles as cooks and bakers, laundresses, and sexual partners in either the baggage train of the travelling army or in a city under siege. Even in these roles, it was not unusual for a woman to have to defend herself at risk of being captured or killed when her side lost.

Any discussion of women and warfare in the ancient world must include discussion of the Spartans; Chrystal dedicates an entire chapter discussing Spartan women's lives as producers of warriors for the state. Spartan women, in his explanation, are different from all other Greek women in that their societal role is directly related to the state being at war: their day-to-day lives reflect not women who are dedicated to domestic activity (though that does take up some of their time) but women who dedicate their very bodies to the production of "strong babies for a strong army for a strong Sparta." Chrystal closes his section on women in Greek history with a chapter on the Macedonians, who had more similarities with Spartan women than with other Greeks. Their societal position and potential power, though not quite the cult-like dedication to the state, are closer to that of Spartan women, possibly because of societal and governmental traditions that allowed women some level of power.

The reader than comes to the literal and philosophical centerpiece of the book, a chapter entitled "Women as Victims of War." This serves as a transition, as explained in the epilogue: "The section on 'Women as Victims of War' is at the very heart of the book: it comes between women at war in Greece and women at war in Rome because it is pivotal to the history of warfare in both cultures." Here the author discusses the universality of women's experience with warfare; an experience that is shared worldwide throughout human history. The stories told of women's experience are real events, and even though we are separated from them by thousands of years, they must be treated with seriousness and respect. In order to bring the point home, he enumerates the experiences of women with war and its effects:

"For women, more often than not, their war is not over when the war is over: wartime sexual and gender-based violence has a real, enduring impact on women's lives long after the fighting has stopped. Women suffer abject shame and widowhood; they wait anxiously at home always expecting the worst of bad news; they are left to grieve and mourn and to struggle on with their lives, often working their farms or businesses alone and bringing up young fatherless children; where the husband-soldier is wounded they may have to spend their lives as carers, tending limbless or otherwise traumatized ex-servicemen, coping with all of the physical and psychological issues disabling injury brings; if raped they are ostracized, rejected by husbands and families; they submit to body shame and loss of personal esteem; sometimes they are displaced - their cities and homes wrecked or requisitioned - forced to move on as penniless refugees, carted off to strange and inhospitable lands with foreign languages and customs where they may suffer more prejudice and sexual and gender-based violence. Just as often they are sold into slavery or become concubines, considered no better than just another bit of war booty."

The third part of the text focuses on Roman women, following roughly the same format as part one, beginning with mythology, then focusing on historical examples, then women involved in war in poetry and prose. This section is somewhat shorter on the generalities, as the experience of Roman women in an army's baggage train or in a city under siege was much the same as that of Greek women. Instead, Chrystal focuses on more specific examples of women's involvement, especially where it is divergent from the Greek experience. The issue of how a Roman soldier's wife interacted with her husband's involvement in warfare is one such divergent point. Those with a passing familiarity with Roman history might think of Antonia and Agrippina travelling with their husbands on campaign, something that would have been unthinkable to most Greeks, male or female. The question of whether a wife should or could accompany her husband to war was brought to debate more than once in the Roman Senate, and it was generally outlawed, though that law was not often enforced. For a time, soldiers were banned from being married while they were in service, though, again, this was only sporadically enforced; many started families with local women while they were posted away from home.

Roman women at home also involved themselves in various war efforts, often with donations of money or other valuable items. Some women could act as unofficial advisors, Chrystal points to Servillia doing so for Brutus in the war after the assassination of Caesar. On the rare occasions when a Roman town found itself under siege, Roman women are said to have conducted themselves well, acting in defense of their homes. These activities are also discussed in the literature of the period, to which the author devotes the last few chapters of the Roman section.

The book ends with discussion of women involved in warfare and combat as entertainment, primarily looking at female gladiators, though there is also a short discussion of women's involvement in war as depicted in the visual arts.

Overall, Chrystal's book is an excellent introduction into the topic of women and their intersection with warfare in the ancient world. His extensive use of primary sources only adds to its value to the student. It could easily be integrated into a survey of either Greek or Roman history, offering a different perspective on the era.

Return of the Barbarians
by Jakub J. Grygiel
The Bible and Early Trinitarian Theology
by Christopher A. Beeley and Mark E. Weedman
Caligula
by Simon Turney
Group Identity and Religious Individuality in Late Antiquity
by Éric Rebillard and Jörg Rüpke
Early Ships and Seafaring: European Water Transport
by Seán McGrail
Lucullus: The Life and Campaigns of a Roman Conqueror
by Lee Fratantuono
Graffiti in Antiquity
by Peter Keegan
Pax Romana: War, Peace and Conquest in the Roman World
by Adrian Goldsworthy
Julius Caesar's Disease: A New Diagnosis
by F. M. Galassi & H. Ashrafian
Legio XVII: Roman Legion at War
by Thomas A. Timmes
A Sacred Kingdom: Bishops and the Rise of Frankish Kingship
by Michael E. Moore