A Sacred Kingdom: Bishops and the Rise of Frankish Kingship 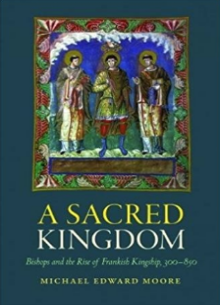 This detailed, carefully argued book shows how Christian bishops used their mastery of moral, social and spiritual power, along with law and tradition, to guide the formation and governance of the Frankish kingdoms.

The period covers the Gallic period, the conversion and baptism of Clovis I (c 508 AD), the deposition of the Merovingians in 751, the missionary conquests of Charlemagne (King 768-814, Emperor 800-814), and the breakup of the unified empire after the death of Charlemagne's son Louis the Pious in 840.

Moore cites nearly 100 bishops' councils during the period, and dozens of royal laws and edicts. Moore argues that the church's "power to shape and guide a society rather than coerce it" (p. 2) was based on:

In one of his many brilliant and well-expressed metaphors, Moore summarizes the bishops' success over five centuries in developing a Christian kingship: "so much royal fabric seemed to absorb an episcopal dye" (p. 7). "Kings were offered a lofty role they could play only in concert with bishops" (p. 140).

Kings and nobles did from time to time attempt to enforce their authority against that of the church. The most intriguing story concerns the henchmen of King Childebert (496-558), and their pursuit of an enemy of the king who had taken refuge in a church. Mindful that it was unlawful to invade the holy place, and following the letter if not the spirit of the law, the men climbed on the roof, tore off tiles, and threw them down on the victim, killing him (p. 192). But overall, the "integration of royal and episcopal power" (p. 254), under the guiding hand of the church, continued apace, reaching its apogee in the reign of Charlemagne as emperor (800-81).

Near the end of the united empire, the highs and lows stand out. Louis the Pious negotiated on equal terms in the 820s with the Byzantine Emperor Michael in their condemnation of the Pope's excessive veneration of icons. Later, in 833, Louis made public penance before bishops at Compiégne, where he had to be physically restrained by bishops as they removed his sword belt (p. 335). The penance related to Louis's alleged misdeeds in an era of "treason, royal rebellion and civil war" (p. 332).

As always with this historical period, it is a pleasure to encounter again the splendidly barbarian names (Sisebut, Grimoald, Wamba), and to read the odd examples of decayed Latin, such as that of the Bobbio Missal. However, for the most part, and in tribute to their maintenance of literary standards in often rough times, the bishops wrote a generally solid legal and Christian Latin, which Moore translates extensively, with the original in footnotes. (Very occasionally, Moore cites some Latin and French without translation.) It is an even greater pleasure to read the grand sweep of over half a millennium, supported by, but never bogged down by the details that support the thesis.

Michael Edward Moore received his higher education at the University of Michigan, taking a B.A. in 1984 (Phi Beta Kappa) and a Ph.D in 1993. At Michigan he studied with Czeslaw Milosz and Hans Küng. Dr. Moore's research centers on ecclesiastical, legal and scholarly traditions of Europe from late antiquity through the Carolingian Empire. His work encompasses the history of medieval politics, the history of scholarship, the papacy, liturgy, royal law, canon law, and the "history of history." Recently he has begun to study the history of philology and hermeneutics.

Michael Mates earned his PhD in 1982 at Fuller Theological Seminary in Pasadena CA, writing his dissertation on St. Patrick and the British Church. After seminary, he taught in Pakistan, and then worked as a U.S. diplomat with the Department of State, serving in Islamabad, Canberra, Karachi, Cluj (Romania), Columbia (District of) and Chisinau (Moldova), before retiring in 2011 to Monroe, Washington State, and starting a new career as co-landscaper at his hectare of gardens, lawns and forest, and brewer of black-fudge garden compost.