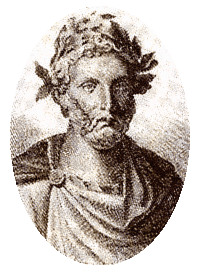 Titus Maccius Plautus was one of ancient Rome's greatest playwrights. He was born in Sarsina, Umbria in about 254 BC. Little is known about his life but it is believed that he worked as a stage carpenter as a young man. Plautus eventually went into business as a merchant shipper and, according to tradition, worked as a miller's labourer after his venture collapsed. He studied Greek drama in his spare time and from the age of forty onwards achieved increasing success as an adaptor of Greek comedies for the Roman stage.

Plautus's plays were mainly derived from Greek works belonging to the New Comedy Style. New Comedy plays were essentially social comedies of manners usually featuring the domestic life of the middle and upper classes. They were very "clean" compared to plays from the Greek Old Comedy genre which commonly used vulgar expressions and jokes - Aristophanes's plays being a case in point. Another typical characteristic of New Comedy was the generalised use of stock characters: the helpful slave, the young lovers, the strict father, the pimp, and so on.

By the time Plautus began to write, New Comedy was becoming fairly popular in the Roman world. Following more primitive dramatic forms such as the Atellane farce or the Fescennine verses, the growing interest in this "new genre" reflected a higher degree of sophistication of Roman audiences. Plautus felt quite free to make adaptations by modifying the structure of the original plays. He was, after all, writing for a different audience and under different performance conditions. There was no permanent theatre in Rome - the first one would not be built until 55 BC - so the plays were put up on a temporary stage in the Forum during religious festivals at specific times of the year where people gathered around when a performance was about to begin. As a result, the plot was conceived in such as way as to keep the audience interested at all times so as to prevent people from being lured away by other forms of entertainment (for instance, scenic games) taking place at the same time.

The language used by Plautus was quite different from the sophisticated and elegant Greek of New Comedy. There was in fact a deliberate lowering of tone and the use of much simpler diction, possibly a version of street Latin that could be easily understood by the lower classes that formed the bulk of his audience. Characters would commonly exchange insults and make use of meta-theatrical references as a way of drawing the audience into the plot:

Pseudolus: This is the letter, and token, which I have intercepted.
Calidorus: Token? What token?
Pseudolus: The one from the Macedonian officer, which has just been brought here. His servant arrived here with it, bringing five hundred drachmas also, and was to take your girl away with him - but I pulled the wool over his eyes.
Calidorus: How did you do that?
Pseudolus: Well, look, this play is being acted for the benefit of the audience; they know what happened because they saw it happen. I'll tell you about it some other time.
Pseudolus

Interestingly, the recurrent use of military diction suggests that Plautus was also addressing the soldiers in the audience, many of whom would have campaigned in Southern Italy and Sicily and so have come into contact with a more refined and cultured life of the Greek cities of Magna Graecia. Indeed the use of Greek words in some plays implies that he expected his audience to have a minimal knowledge of the language. In addition, there were many references to Greek mythology, further implying a degree of hellenisation of the population, although Plautus would sometimes use the Latinised names of Greek heroes and Gods:

Megadorus: You seem to have withdrawn from the debate?
Euclio: I have. I was meditating how I could bring an action against you, as well you deserve.
Megadorus: What ever for?
Euclio: What for? For filling every hole and corner of my house with thieves, curse you! For sending me five hundred cooks, each with six hands like a tribe of Geryons. Argus with all his eyes - the fellow whom Juno set to watch Io - would have his work cut out to keep an eye on that crew. Not to mention a flute-girl who, once the wine starts flowing, is likely to cost me a Pirenian spring of drink. And the food -
The Pot of Gold (Aulularia)

It is believed that Plautus modified and even added parts he himself created to the original plays; distortions and loose ends are commonly found in the plots. The playwright was very good at stagecraft and knew exactly what to include and what to change in the play in order to entertain the public. This was, of course, what really mattered, and it is highly probable that the audience did not notice any inconsistencies. Even if they did, they might not have cared as long as they continued to be interested in what was happening on stage.

Plautus's plays completely reversed societal rules Romans were accustomed to. It was therefore safer to attribute characters' weaknesses and stupidity to Greek society - after all Romans regarded Greeks as dissolute and deviate. It would have been impossible to portray a slave cheating on his master in a play set in Rome or Italy, as happens for instance in Pseudolus, which is of course set in Athens. Plautus was using a safer medium and so could make allusions to contemporary events in Rome more freely. It is important to remember that the local authorities - aediles and other magistrates - responsible for putting up public performances had to approve them first. As a reward for such careful planning and successful adaptations, Plautus was eventually granted Roman citizenship.