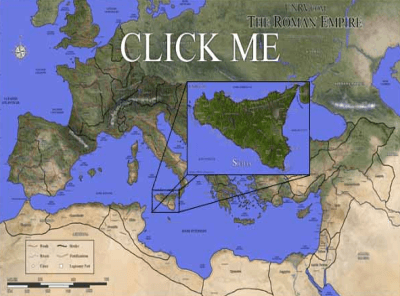 The first known inhabitants of the important Mediterranean island were the Elymi, Sicani, and Siculi.

The originally democratic Greek governments were gradually replaced by tyrannies, particularly those of Gelon, Hiero I, and others at Syracuse.

In the 5th Century BC Syracuse gained control over the other city states, but Phoenician influence was rapidly taking hold by Carthaginian expansion. The Carthaginian Hamilcar was repulsed at Himera in 480 BC, but later invasions gained control (by 400 BC) of more than half of the island. More invaders from mainland Greece seized the remainder, and Sicily became a battleground for rival empires.

A century of antagonism between Greeks and Carthaginians eventually led to a treaty between the Greek King Hiero I and Rome. This brought the fledgling Roman Empire into direct conflict with Carthage in the First Punic War between 264 and 241 BC.

The Roman victory would make them the predominant force in Sicilia. With the death of Hiero II in Syracuse in 212 BC and another Roman victory over Carthage in the Second Punic War, virtually all of Sicily came under Roman control. Total control would remain in doubt, however until the defeat of Hannibal in 146 BC.

The Romans would complete the enriching Hellenization of Sicilian culture. However, the resources of the island - known as the Breadbasket of Rome - were depleted by the Romans, who also founded the large estates (latifundia) that subsequently greatly hampered the economic development of Sicily. The island was regarded as land to be exploited, especially agriculturally, to supply Rome with grain. A colonial-type economy was established and the land assigned to Roman proprietors using Asian slave labor bought in the Delos markets.

The slave uprisings of 139 and 104 BC are an indication that slavery and exploitation of the island had increased. The first slave revolt helped lead directly to the rise of the Gracchi brothers in Rome. They instituted agricultural reform as a policy in Rome. Further acts transferring power from the senate to the Tribunes of the Plebs and the ensuing violence it caused was one major of many factors, however, leading directly to the fall of the Republic and the rise of the Empire.

Corruption in government of Sicilia reached its peak with Gaius Verres in 73 - 71 BC. Marcus Tullius Cicero was called to Sicily to argue against the island's corrupt governor, who fled in anticipation of being tried by the great orator. The trial is little more than a footnote to history, but Cicero's lengthy indictment of the governor contains many useful descriptions of the Sicily of those times.

Relegated to the backdrop of Roman political life, Sicily found itself again involved in the final years of the Republic. At the time of the second triumvirate of Octavian, Marcus Antonius and Lepidus, Sextus Pompeius, son of Pompeius Magnus, occupied the island, blocking the journey of the expedition carrying grain to Rome.

In 36 BC Octavian landed an army in Sicily, defeated Sextius and, in 27 B.C., became emperor with the name of Augustus. He reorganized the province, generally confirming the Latin citizenship Caesar had conferred in 46 BC, but bestowed Roman citizenship on no more than a few cities. The Greek features of the administration were supplanted by the Roman and under Augustus the transfer of colonies began: at Syracuse, Taormina, Catania, Tindari, Panormo and Termini were assigned to army veterans.

Such steps did not, however, radically affect the island's political and economic structures. Rome's interest in Sicily was entirely marginal and determined both political isolation and economic and cultural regression. The Greek language, however, remained predominant. Augustus was the first to introduce Latin to any meaningful extent, but then only among the privileged classes and ruling elite.

Sicily, despite its rather peaceful existence during the imperial period, suffered the same fate as the rest of the west. By the earth 5th century Vandals who had migrated from Germania, to Hispania and Africa, overran Sicily as well.

In ancient times, Sicilia was covered with extremely rich farmland, whose wheat and corn harvests fed virtually the entire western part of the Roman Empire. Its thick forests were renowned, but the Romans plundered them to build their great naval fleets and the myriad wooden homes that fueled Nero's infamous fire. The island also exported fruits and almonds.

The original tribes of Sicilia, the Elymi, Sicani, Siculi and Brutti were nearly completely absorbed by Phoenician, Greek and then Roman culture. Greek mythology and folklore would assert the greatest influence on Sicily, and Sicily's museums are filled with religious artifacts and statues reflecting the important culture whose language, philosophy and law would form the very foundations of Western civilization. Archimedes, the great mathematician and engineer, was born in Syracuse in 287 BC.

Did you know...
Sicily was a province of the Roman Empire for six centuries. It was something of a rural backwater and a mainstay of the food supply for the city of Rome. The empire did not make much effort to Romanize the island, which remained largely Greek. The most notable event of this period was the notorious misgovernment of Gaius Verres.