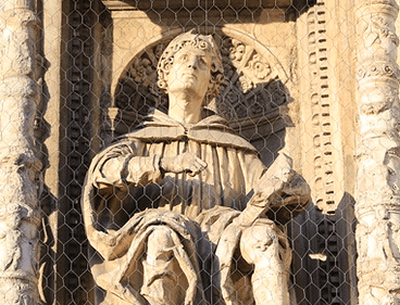 Caius Plinius Caecilius Secundus (62 - 113 AD), nephew and later adopted son of Pliny the Elder, was an influential orator and statesman of the early empire. He served all the common magistracies of the Cursus Honorum, including Consul in 100 AD.

He died while serving as proconsular governor of Pontus-Bithynia. He was a voluminous correspondent, and we have nine books of his letters that were probably intended for public consumption.

They relate to a large number of subjects and present vivid pictures of the times in which he lived.

It is impossible to be sure whether Pliny Minor was the most generous man in Italy because the information available isn't well-documented regarding the detailed finances of Pliny Minor's wealthy Roman contemporaries. Thanks to Pliny's letters however, we can picture his life quite well, particularly his wealth. To support the statement that Pliny's generosity was outstanding, statistical data about his finances will be used as support.

Though Pliny Minor was rich, his fortune was considerably smaller than that of many other senators such as Gnaeus Cornelius Lentulus, Quintus Vibius Crispus, L. Annaeus Seneca, Gaius Passienus Crispus, and many others whose net worth was in the hundreds of millions sestertii (possibly rangings from 200- 400 million). The reason for this massive gap of wealth between Pliny and the other senators was that Pliny's landholdings and properties were located mainly within Rome while the prosperous senators would profit from having numerous estates in many provinces beyond Italy. This is not to suggest that Pliny was poor, but that his fortune was a relatively modest in comparison to some of his peers. Having come from a family with substantial existing wealth, he had enough means that he needed only to focus on his senatorial career and build his reputation. In part to accomplish this, he became a great civic benefactor; perhaps the greatest one.

Quite often Pliny would donate money as political patronage to help his friends gain office and senatorial status. However, this money was as a donation, not a loan as was more common in such endeavors, though Pliny did expect some of his generosity to have a reciprocal outcome. As one example of his generosity: he donated 300,000 sestertii to a friend running for senatorial 'election' Another example includes a similar donation of 300,000 sestertii to Romatius Firmus of Comum in order to obtain equestrian status so that he could have membership in the decuriae (the jury-panels of Rome). Metilius Crispus of Comum also received financial help from Pliny in order to obtain a centurionate. Lastly, there was a Artemidorus the philosopher who received an interest-free loan and a Martial the poet whose traveling expenses were paid for by Pliny.

Though the examples above were political, Pliny donated more often to the plebs urbana. Perhaps most notable of these donations was the oppidum of Comum. To start, a rich man by name of Saturninus made Pliny his heir to a large fortune of 1,600,000 sestertii because of Pliny's great reputation at Comum. This reputation also stemmed from Pliny's uncle Pliny Major who donated money for a temple in the city (a total of 1,450,000 sestertii was inherited by Pliny within the 15 years that the Letters covered). Pliny, knowing Saturninus intentions, donated a third of the inheritance, about 400,000 sestertii, directly to Comum, while Pliny kept 700,000 sestertii. This was only a preliminary gesture however as there was much more to come for the people of Comum. The largest example of generosity to Comum was donated in three amounts. The library of Comum was the single greatest example of note. From Letters, we know that 500,000 sestertii was donated as alimentary funds followed by 100,000 sestertii for maintenance of the library. The largest donation was actually a sum of 1,000,000 sestertii to fund the construction of the structure. Not only did Pliny give the people a library, he provided public feasts, decorated their baths, monuments, and countless other items and gestures. In an accurate sum of lifetime generosity to Comum, the donation was 2,466,666 sestertii.

Comum wasn't the only place to receive generosity from Pliny. The oppidum Tifernum Tiberinum was given a temple to house the imperial statues that were displayed in a gesture of thanks for receiving votes when Pliny was younger (the emperor Nerva also promised to build it, so in this case Pliny was also providing this as an act of good will to honor imperial house). Pliny even gave the town a large celebratory feast for the opening of the temple. There was another temple which Pliny restored and another feast dedicated to the temple of Ceres for the people that gathered there every September. At Altinum, Pliny restored two sets of baths with 200,000 sestertii for maintenance and 800,000 sestertii for restoration along with a similar gesture at Hispellum. A final great example in terms of kindliness, he manumitted (freed) more than 100 personal slaves in that period of time, though agricultural slaves were excluded because they were too valuable to his estates. Despite this restriction, Pliny's generosity did not have much of a limit.

A summary of his generosity to Italy came close to 5 million sestertii, but this is probably well short of a true total because his letters provide only a limited account of all the donations. His only rivals in Italy were Galen (the physician) and Matidia (the great niece of an Emperor), but Pliny's benificence is well documented.

To restate the original message, Pliny was likely the most generous man in Rome, but this generosity probably pales in comparison to Patricians in other provinces (ie, Crinas gave 10 million sestertii to Massilia in his will, a donor at Aspendos in Pamphylia gave 8 million sestertii for an aqueduct, and a pater named Herodes Atticus paid 16 million sestertii for benefit of an aqueduct at Alexandreia Troas. Many would assume that Pliny's generosity was all directed towards finding glory and while there is some truth in that, careful review indicates a dedication to tradition and cultural improvement. He was following the encouragement of Emperors to give public munificence, especially by Augustus and Pliny's origin was not originally in the aristocratic families, but rather the local municipal families. Though Pliny's quantitative size of generosity may not have matched others, the amount of effort and money in helping the public was proportionately overwhelming. He did the very best that he could do with what he had as a true philanthropist, perhaps unlike those who were extensively rich and only donated to the public political gain, fame or glory.

Did you know...
The eruption of the Vesuvio of 79 AD is the first ever volcanic event of which a detailed eyewitness description is available.

Did you know...
The government of the Roman Empire changes significantly from that of the Republic. The senate, the elite class of Rome, functioned more as a club of the rich and famous families than as a governing body in the Imperial system.