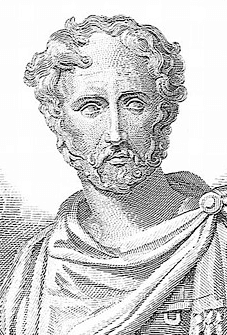 Gaius Plinius Secundus c.A.D. (23 - 79 AD) was a Roman naturalist, friend and soldier of the Roman emperor Vespasian. He was also the uncle of Pliny the Younger, whom he would adopt as his son in his will. His great work was dedicated to Vespasian's son, and future emperor, Titus. His single surviving work, Historia Naturalis, is a rich, in-depth encyclopedia on natural science in the Roman world. In 37 books, he covered geography, anthropology, zoology, botany, medicines and mineralogy.

He was an immense source of knowledge on these subjects, and his work is mainly a collection of facts as it was known in the ancient world. As a scientific study, it is failing in light of modern knowledge, but as an historical reference to the science of the Romans, it is an invaluable resource. Pliny was so dedicated to his pursuits, that he died of asphyxiation while researching the eruption of Vesuvius and subsequent destruction of Pompeii.

Did you know...
The eruption of Mt. Vesuvius of 79 AD is the first ever volcanic event of which a detailed eyewitness description is available.