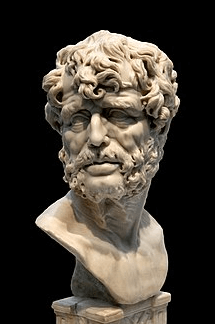 Lucius Annaeus Seneca, the younger (4 BC - 65 AD) was a Roman philosopher, dramatist, and statesman of the highest order. His father, Seneca the Elder, also wrote on subjects including criminal and civil law.

After studying rhetoric and philosophy he became famous as an orator, and served as a full member of the Senate. He was exiled by Claudius due to relations with his niece Julia, but was recalled within a decade.

He was the tutor of the young future emperor Nero who, upon his accession, virtually ruled the empire along with Afranius Burrus. The emergence of Nero's wife Poppeia changed the court arrangements, and it wasn't long before Seneca was the subject of imperial scorn.

Despite attempts to retire to private life and focus on his writing, accusations of conspiracy forced the brilliant statesman to commit suicide in 65 AD.

Did you know...
Seneca's plays had a profound influence on the development of the tragic form in later times, particularly in the age of Shakespeare.