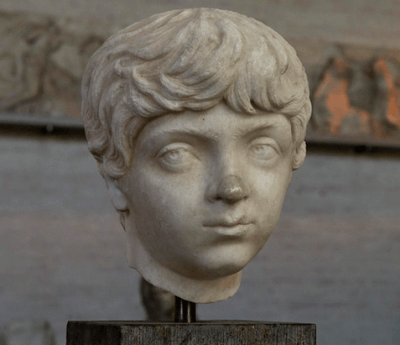 The defining moment of Geta's life happened eleven months before he was born. This was when his brother Lucius Bassianus (the future emperor Caracalla) was born to Geta's parents, Domna Julia and Septimius Severus.

During the period when both brothers were born, Septimius Severus was an imperial functionary in the court of the emperor Commodus, the last of Rome's Antonine dynasty. Due to the demands of the imperial service, Lucius Bassianus was born while his father was serving in Gaul, and on 7 March 189, Geta was born in Milan, Italy. (This birthplace is recorded in the 'Life of Geta' in the notoriously unreliable Historia Augusta, which proves its unreliability by saying in the 'Life of Septimius Severus' that Geta was born in Rome.)

The dates of their birth was almost the only way in which the two brothers were ever close. Lucius, the elder, was somewhat more impetuous and hot-tempered, but Geta's own temperament was not such that he would permit himself to be ruled by a sibling. Consequently both Julia Domna and Septimius Severus had frequently to intervene in sibling spats and rivalries, even as Severus was engaged in more serious spats and rivalries in the process of making himself Roman emperor.

These rivalries became worse when, as emperor, Severus promoted the young Lucius to the rank of Augustus, effectively making Lucius his co-emperor. Severus did this to provoke a war with Clodius Albinus, governor of Britain who had until then considered himself as Severus' designated successor. However, in making Lucius his successor, Geta was automatically relegated to the position of 'back-up heir', a position that Severus made official after the defeat of Albinus by making Geta officially 'Caesar' a rank usually given to the appointed successor to an 'Augustus'.

The Historia Augusta remarks that 'As a youth he [Geta] was handsome, and although short in his manner, this stopped short of outright disrespect. He was libidinous, and a gourmet who frequently over-indulged in food. He enjoyed experimenting with spices in his wine.' (Life of Geta 4). Geta is also said to have been well spoken, despite a slight stammer, to have been fond of bright clothing, and to have resembled his father in looks. (Lucius took more after his mother.)

Both Geta and Lucius hated and feared Plautianus, Severus' praetorian prefect whom they suspected - with some justification - of plotting to dispose of them and rule after the death of Severus. Lucius hated Plautianus all the more because he had been forced to marry Plautianus' daughter, whom he despised. Together with their mother, the brothers contrived the overthrow of Plautianus, though this victory brought them no closer together.

"As though Plautianus had been a governess whom they had now managed to be rid of, the brothers abandoned all restraint with their conduct. They molested women and abused boys, embezzled money, and spent their time with [low life types such as] gladiators and charioteers. While they were alike in their conduct, they were apart in their rivalry. If one brother took one side the other would be certain to back the rival. Eventually they engaged in direct competition in a two-wheeled chariot race and Antoninus fell out and broke his leg." Cassius Dio Epitome 77.7

Later historians tried to depict Geta as quiet and studious, but Cassius Dio - who knew the pair from life - shows that the difference between them was relative, and that both possessed much the same character. Dio calls Lucius 'Antoninus' because Severus did the same as a public relations exercise which linked his family with the fondly-remembered Antonine dynasty. After seeing the distress this caused Geta, Severus bestowed the same name on his other son.

When, towards the end of his life, Severus decided to campaign in Britain, he took his feuding sons with him. Lucius (already nicknamed 'Caracalla' because of his fondness for the hooded cloaks of the same name) accompanied his father on campaign to get familiar with the command of the legions, while Geta stayed with his mother in Eboracum (York) to learn the arts of administration. Perhaps the plan was for the brothers to eventually switch roles, but if so, the plan was overtaken by events. Severus became fatally ill. At this point, in 209, the dying emperor made Geta an Augustus, co-emperor with himself and Caracalla. Perhaps this was done out of anger at Caracalla's evident eagerness for Severus' death, as is sometimes claimed. More probably this was at the urging of Julia Domna, as both parents were very well that Geta's life expectancy as a subject of the emperor Caracalla could probably be measured in days, if not hours.

Such was the antipathy between Rome's two new emperors that during the return journey to Rome they would not sit at table together, for each was afraid of being poisoned by the other. In Rome the brothers took over the palace on the Palatine and divided it between them. All interior doors connecting the two parts were sealed up, and each emperor maintained a large squad of highly-alert bodyguards to protect him from the other. Despite this, Caracalla made a determined attempt to have Geta assassinated during that year's festival of the Saturnalia.

In part this assassination attempt was because Caracalla was afraid that he was losing the battle for influence. Geta was marginally the milder and better-educated of the two, and as such more popular with the senate. Geta also cultivated his resemblance to his father by adopting the same beard and hair style, which made him popular with the people. However, Caracalla had the edge in terms of the support of the army.

There was a suggestion that the empire might be divided, with one brother taking the east and the other the west. If so, the idea was firmly quashed by Julia Domna,who could clearly see that this would escalate the rivalry between her sons to outright civil war across the empire. Nevertheless, something had to be done. Government was at a standstill as each brother reversed the other's decrees, freed anyone the other had convicted, and shamelessly promoted his own favourites.

Accordingly Julia Domna arranged a peace conference to be held in her own chambers with only herself and the two brothers present. The fateful meeting happened on December 19. Hardly had the three settled down to talk when centurions loyal to Caracalla burst into the meeting and fatally wounded Geta who died in his mother's arms. It is unknown exactly how these details, complete with Geta's plaintive last words ('Oh, mother who gave me birth, protect me as I am being murdered!') became public knowledge since none of the protagonists would have been inclined to give details. It is even possible that Julia Domna connived at the murder, since otherwise this represented a shocking breach of security, and it is certain that Julia was aware that things could not continue as they were.

Caracalla claimed that by Geta's murder he had pre-empted a plot against himself, and he used the occasion to kill an alleged 20,000 enemies, claiming that they were supporters of Geta. Geta himself suffered Damnatio Memoriae - the erasure of his memory - with all his statues, portraits and busts being destroyed. However, Caracalla could do nothing about the thousands of coins in circulation which showed himself, Severus and Geta all pictured together in a desperate attempt by earlier imperial propaganda to show a happy family team.

According to the Historia Augusta, popular sympathy for the deceased Geta grew to the point where Caracalla was forced to deify his younger brother, as was traditional with deceased emperors. Caracalla did this ungraciously remarking 'I don't mind if he is divine, so long as he's dead.'

Did you know...
The principal exports from Mauretania Caesariensis were purple dyes and valuable woods.