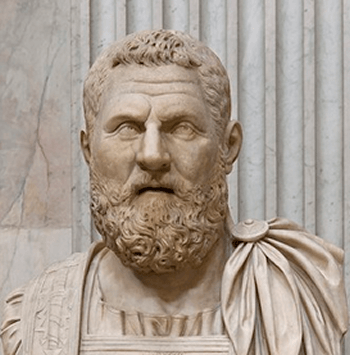 Following the assassination of Commodus on December 31, AD 192, Publius Helvius Pertinax, as both a revered elder member of the Senate and a chief lieutenant of the former emperor, was chosen to replace him. The reign of Pertinax is intriguing for its short length and related tragic turn of events which led to the further erosion of the Roman political state. It is also notable for his personal humble origins marking a distinct difference from all of the Princeps/Emperors who ruled before him.

Pertinax was born August 1, AD 126 as the son of a freedman, Helvius Successus (according to the Historia Augusta, but Dio Cassius simply offers that he was not of noble birth). He worked as a teacher of grammar in his earlier career, but through a fortuitous use of patron/client connections was able to secure a more lucrative career as a legionary officer. The notion that the son of a freedman could rise to the highest authority in the empire is at least one indication of the breakdown of more traditional political customs. However, Roman political tradition always did allow for upward mobility and this may also be just another indication as to the growing power and importance of freedmen as imperial advisors and confidants. It was as a soldier, first under Marcus Aurelius and Lucius Verus that Pertinax began his rise up the political ladder. He served in Syria where his exemplary service in the Parthian war earned him several promotions and regular advancement. From Syria he served as a military tribune in Britannia, earned commands in Moesia and Germania and then ultimately was promoted to Procurator of Dacia. There, he unfortunately earned the mistrust of Marcus Aurelius for alleged conspiracies, but through the intervention of the emperor's son-in-law Claudius Pompeianus, he eventually came back into the emperor's good graces. He served once again with distinction in the Germanic Wars, and was named a suffect consul in AD 175.

Upon the passing of Marcus Aurelius and accession of Commodus, Pertinax earned a reputation as a valuable member of the Senate, but intrigue by the praetorian prefect Perennis forced Pertinax into retirement. After the execution of Perennis for his own conspiracies, Commodus made amends with Pertinax by appointing him as governor of Britannia where the legions had been in a troublesome state of unrest. It was in Britain that Pertinax earned a reputation for heavy handedness, especially in quelling a particularly dangerous mutiny that almost cost the governor his own life. Hostility between Pertinax and the legions of Britannia forced him to resign his post but he rebounded and next served as the prestigious governor of Africa before finally acting as the urban prefect of Rome. It was in this capacity that Pertinax was serving when the final plot to assassinate Commodus was carried out.

Commodus was murdered on December 31, AD 192 and Pertinax (while there is no direct evidence of his involvement) seems to have been the conspirator's candidate for succession from the very start. Praetorian prefect Laetus (one of the two leading conspirators along with imperial assistant Eclectus who both feared for their own lives under the increasingly paranoid Commodus) presented Pertinax to the praetorian guard as Commodus' replacement. Initially the soldiers were reluctant to accept Pertinax, likely in part because of the popularity of Commodus with the men, (the ancient sources, Dio and the HA in particular, remained mum on this however probably due to their own personal dislike of the deceased) and also because the treasury was in such a woeful position that the traditional payment to the men from the new emperor was not considered adequate. Despite this, Pertinax offered enough of a donative (12,000 sesterces per man) to win temporary support, but the money had to be procured by selling off pieces of Commodus' personal properties, and the relationship between the emperor and his guard was off to an unhappy start.

Pertinax has been favorably compared to Nerva, the man who was named emperor following the assassination of Domitian and ushered in the era that came to be known both as that of the '5 Good Emperors' as well as the 'adoptive' period. Like Nerva, he immediately attempted to distance himself from the authoritarian ruling style of his predecessor and even reinstituted the title of Princeps Senatus (first man of the senate), in a clear attempt to build political harmony with his peers. While Pertinax did have children he distanced them and his immediate family from imperial politics and avoided associating them with the trappings of authority. However, despite his best efforts to reverse some of the trends of Commodus and to institute various political, military and social reforms, Pertinax' reign would end so abruptly that he would have little time to develop a complete governing strategy, name a stabilizing and popular heir (such as Nerva did with Trajan) or rebuild the treasury that had been so terribly drained by Commodus.

It was the apparent integrity of Pertinax and his attempts to reduce some elements of corruption and conspiratorial intrigue that seemingly led to his own demise. Laetus, the very praetorian prefect who was in part responsible for the slaying of Commodus, turned against the man he chose as a replacement perhaps from a reduction of personal power or opportunities for personal gain. An initial plot to replace Pertinax with the standing consul Falco, while Pertinax was occupied in Ostia with the grain shipment, was defeated. While Falco was allowed to retire into privacy several conspiratorial members of the praetorians were put to death for their involvement (as the HA reports, all condemnations were based on the testimony of a slave). This not only angered the surviving soldiers but created a sense of consternation among the remaining guardsmen as well.

Rather than wait for their own turns to come, 200 to 300 (reported by Dio and the HA respectively) praetorians stormed the imperial palace. Rather than flee, or order his own palace guard to intercept the intruders Pertinax attempted to reason with the soldiers personally, but ultimate reconciliation of the relationship between praetorian and emperor was futile. On March 28, AD 193 Pertinax was struck down and beheaded and his head paraded out of the palace on the end of a spear. After only 87 days, at the age of 67 years, a promising reign and potential new era had come to an end, though history can never be fully sure what, if any, positive effects Pertinax may have actually had. With their personal power restored, the praetorians essentially auctioned off the empire to the highest bidder. City prefect Flavius Sulpicianus (Pertinax' father-in-law) and Didius Julianus (an exile from the reign of Commodus) raised the monetary stakes against one another until ultimately Didius Julianus purchased the throne for 25,000 sesterces per Praetorian. (With 10 double strength praetorian cohorts of approx. 800 men, the total payment may have been as much as 200 million sesterces or 50 million denarii). Didius Julianus' reign would end up being even shorter than that of his predecessor (66 days) and resulted from the civil war that followed Pertinax' assassination. Pertinax would eventually be accorded full imperial honors and deification by the eventual victor in that war, Septimius Severus, and would be remembered largely in a positive manner in posterity.


Did you know...
The Praetorian Guard usually included a small cavalry detachment, equites singulares augusti, to escort the emperors to important state functions and on military campaigns.